By Carmen S. Christian - The Conversation 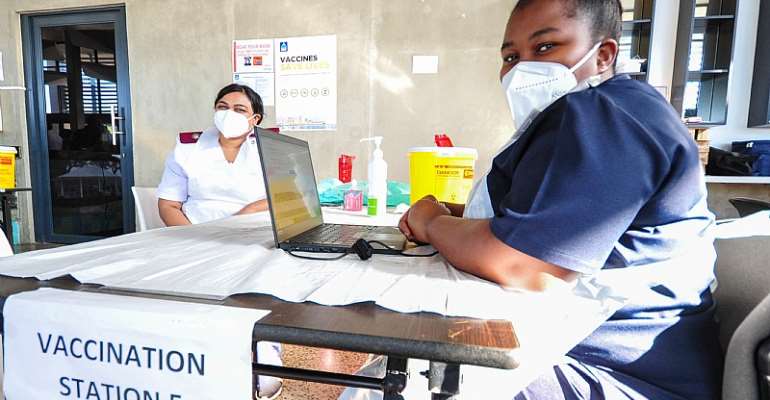 If South Africa continues vaccinating at current rates, it would take over two years to reach the targeted coverage of 67% of the population. - Source: Darren Stewart/Gallo Images via Getty Images

South African president Cyril Ramaphosa recently announced the scaling up of the country's COVID-19 vaccination rollout. At the beginning of September 2021, the entire adult population – people over 18 – will be eligible to get vaccinated. Around 40 million adults fall into this category . This is an ambitious target and will take a concerted effort to achieve.

Indeed, in his address on 25 July, Ramaphosa reaffirmed the government's commitment to working with the private sector on achieving the target.

South Africa has a two-tier health system. The public sector is wholly funded by the government and serves the majority of the population. The private sector is partly funded by the state and by patients. Around 27% of South Africans have access to private healthcare. But because official vaccine statistics are not split by sector, there is no way of accurately comparing the rollout efficiency of the public and private sectors.

What we do know is that the government is the sole purchaser of vaccines . It procures, distributes and oversees the rollout of the vaccine at vaccination centres, work-based programmes and outreach-based programmes.

Part of this function includes distribution to the private sector, which started rolling out vaccines shortly after the public sector on 24 May 2021 .

There's been a recent uptick in the vaccinations . But one estimate shows that South Africa is averaging just under 46,000 vaccines a day. If the country continues vaccinating at this rate, it would take over two years to reach the targeted vaccine coverage of 67% of the population. The country cannot afford to wait this long and therefore the need to accelerate the rollout remains urgent. All hands should be on deck.

A swift and consistent vaccine rollout is critical to prevent entrenchment of pre-existing health inequalities .

The private sector's willingness to quickly pick up the slack and additional costs of the rollout is most likely driven by profit. But increasing coverage and accelerating the vaccine rollout would benefit society at large too.

Read more: Healthcare in South Africa: how inequity is contributing to inefficiency

More than 70% (1,026 sites) of the currently available vaccination sites are in the public sector. But the number of private sector sites (324) is growing steadily. The three main private sector players are the medical aid scheme Discovery , and pharmacy chain groups Clicks and Dischem . Members of the public can go to any site – public or private – without having to pay.

If the private sector can offer vaccinations more efficiently, then serious consideration should be given to expanding private sites at a faster rate. The counterargument to this is that private sites are not geared towards mass rollouts, unlike the public sector. This may result in bottlenecks at private sites during early phases of rollout, and anecdotes suggest this has been the case . Similar to the public sector, most vaccine sites in the private sector are also only open five days a week at the moment.

Given its supply chain infrastructure and networks, the private sector can take on a bigger coordinating role in the distribution of vaccines. An existing public-private partnership that works well is the centralised chronic medicines dispensing and distribution – also known as Dablap. State patients registered with the programme can collect their state-issued chronic medication from their most convenient pick-up point, be it in the community, public or private sector. A similar solution could be designed for the vaccine rollout.

Other interesting solutions have been suggested, such as vaccinating without registration on the government system. Another is procurement strategies that reduce the risk of using a dominant vaccine producer.

However, any plan that does not place the needs of people first, whether it involves the public or private sector or both, is bound to fail. This fact underscores the importance of partnering with communities in any vaccine rollout.

An example of a community-oriented innovation can be found in Limpopo, the poorest province in the country , which seems to be at the forefront of reaching population immunity . Much of its rapid progress has been attributed to including local churches and traditional leaders in the rollout plan. Communities seemed to trust local leaders and faith-based organisations more than healthcare professionals and politicians. Limpopo carried out large-scale door-to-door registration and vaccination in the most inaccessible, rural parts of the province with poor internet connectivity. As a result it overtook other provinces with rollout numbers.

In South Africa, it is the poorest and most vulnerable who struggle to access care and therefore have the worst health outcomes. The impact of a (possibly) two-year-long vaccine rollout – whether due to supply side exclusion , demand side hesitancy and unrest , poor planning by government , or global vaccine power dynamics – is likely to hit vulnerable subgroups the hardest.

Carmen S. Christian has worked on research projects funded by the NRF and the Bill and Melinda Gates Foundation.