The Ottoman touch in Ghana 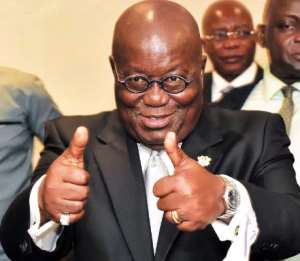 President Akufo-Addo must count himself fortunate for recording to his credit monumental physical landmarks in Ghana's contemporary history.

Besides the non-tangible credits such as the free SHS and others with far-reaching effects, we were a fortnight ago blessed as a nation with the commissioning of the country's first four-tier interchange.

And now an Ottoman-style architecture mosque modeled along the famous Blue Mosque in Istanbul has joined the burgeoning list of structural beauties.

For connoisseurs of architecture as it were but who have not traveled to Turkey to savour the wonders of the Euro/Asian country's Sultan Ahmed Mosque aka Blue Mosque built between 1609 and 1660, the National Mosque in Accra offers them an apt replica.

No wonder President Akufo-Addo during the commissioning charged the Tourism Minister to work upon the tourism potential of the edifice.

A mosque complex of the magnitude and style of the one under review is great for a nation's esteem; it is auspicious that it is located in Ghana.

The commissioning offered us another opportunity to showcase to the world the faith-harmony that has stood us apart from others.

The highpoint of the President's delivery at the commissioning was the reference to the interfaith reference which the National Mosque represents.

The honour of commissioning the latest addition to the national capital's skyline by a Christian President supported by a Muslim Vice President is yet another evidence of our outstanding interfaith cordiality. The icing of the cake in this direction was the inclusion in the guest list the leadership of the Christian faith in the country. What better way to lubricate the already existing cordiality between the Abrahamic faiths in Ghana.

In recent times there have been attempts to rock the boat of this outstanding interfaith co-existence for political leverage.

Fortunately, like hot air the wicked project evaporated as fast as it came. It was bereft of good heartedness hence its failure.

Even as we celebrate this magnificent piece of Ottoman architecture and the inherent tourism potential, let us remember those whose efforts led to what stands today as a national mosque.

Attempting to present the long list of contributors for acknowledgement is ill-advised because it would not cover all such personalities some of them long departed to the hereafter.

Suffice it to refer to an interesting issue however as it pertains to Vice President Mahamudu Bawumia.

His father Alhaji Mumuni Bawumia, the then Chairman of the Council Of State in the 90s, who like others played wonderful roles in the journey to the National Mosque as it stands today said when the documents for the land were being presented to the National Chief Imam as a trustee for the Islamic community 'I wish this mosque will be constructed during my lifetime.'

The ways of God are not ours, mere mortal. Alhaji Mumuni Bawumia departed this ephemeral world for eternity before the commissioning last Friday. His son, Vice President Mahamudu Bawumia did not only witness the commissioning, he was part of the unveiling process besides his unquantifiable behind the scene contributions.