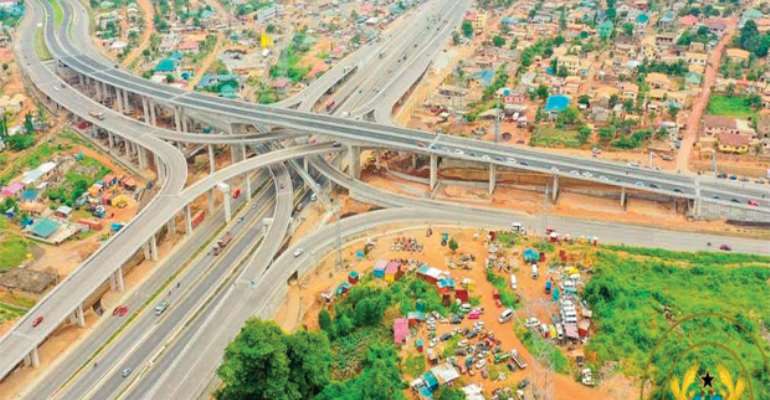 Ghana has a new feature to her skyline for which we must pat each other on the back.

The completion of an $83.9m four-tier interchange, the first in West Africa and second in Africa, is a feat for which the country's Chief Executive Officer, President Akufo-Addo deserves special felicitations.

For a President who has dubbed 2021 as a year of roads, the unveiling of an interchange of this gargantuan magnitude is auspicious. Imagine a dual carriageway from Kumasi ending the trip to the nation's capital through the Pokuase interchange. This is the next step as efforts are on to dualise one of the country's busiest highways which also serve as a gateway not only to the north but to our ECOWAS neighbour of Burkina Faso.

Even as we relish the sheer beauty of the edifice as it were, let us consider the rationale behind the project.

Until the interchange came into being the notoriety of this segment of the Accra to Kumasi highway in terms of traffic logjams was household knowledge.

The convenience the structure has now visited on motorists must not be lost upon us as we drive along the beautiful interchange.

Unfortunately however, the tendency for some hawkers to create selling spots on the lower segment of the interchange is a reality.

Commercial commuter vehicles will maintain their usual stopping at unauthorised spots to load and offload passengers thereby defeating the purpose for which the interchange was built.

Even before the commissioning last Friday, pockets of hawkers and unauthorised parking of commercial commuters were being noticed.

We expect the Amasaman Police under whose jurisdiction the interchange falls to take charge of such avoidable features on the latest edifice in the nation's capital.

It behooves the Ga West Municipal Assembly to ensure that hawkers do not disturb the free flow of vehicular traffic on the road here. The MCE should deploy his personnel to stop the hawkers from pitching camp there. If they are not stopped now their presence would become permanent and it would be difficult to uproot them.

The landscaping on the road has enhanced the beauty of the edifice. With a pedestrian overpass nearby, there is no reason why people should risk their lives by crossing the roads; part of which is a highway. Crossing the road also puts stress on the plants on the medians and eventually killing them. We must maintain the beauty of the edifice which comes with the beautiful ornamental plants.

Accra's ceremonial roads have a similar feature of dead green grass because pedestrians walk over them to reach the other side of the road.

We must preserve the Pokuase Interchange, its landscape et al. No portion of it should be allowed to be used for a fitting shop. A $83.9m project is mammoth and the purpose for which it was constructed should be savoured by all.