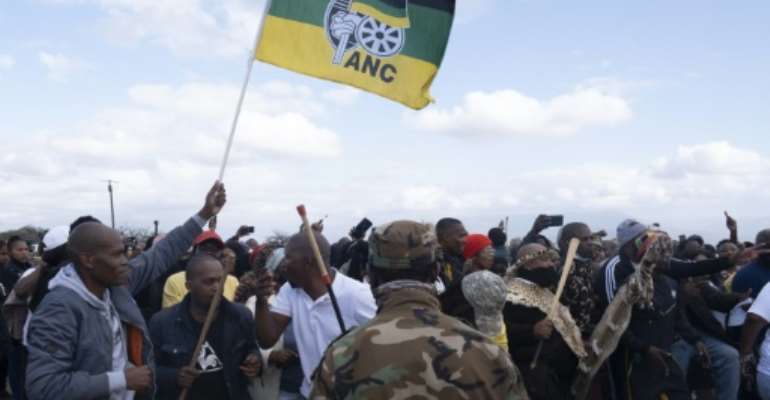 In a show of force, Jacob Zuma loyalists are camped outside their embattled leader's Nkandla homestead in Kwa-Zulu Natal province. By Emmanuel Croset (AFP)

Hundreds of supporters of former president of South Africa Jacob Zuma remained camped outside his home on Sunday vowing to render the country ungovernable if he is jailed.

After historically sentencing him to a 15-month term for contempt of court, South Africa's constitutional court agreed to hear Zuma's challenge to rescind the order.

A surrender deadline was set to run out on Sunday but after refusing to testify in a corruption trial, Zuma has shown no sign he will hand himself in to the authorities.

In a show of force, Zuma loyalists clad in their ANC regalia have been camped outside their embattled leader's Nkandla homestead in Kwa-Zulu Natal province for weeks.

Some on Sunday were singing, "Don't rush the war, war kills!"

"If (Police Minister) Bheki Cele comes here to arrest uBaba (Zuma) he must start with us,' Lindokuhle Maphalala told AFP.

Vowing to protect Zuma against jail time, the protesters called for President Cyril Ramaphosa to step down.

"We are here to say Ramaphosa must step down. Must step down", a visibly angry loyalist said. "As from Monday we will make the country ungovernable."

Police, under orders to arrest Zuma if necessary, were stationed across the province on Sunday in a bid to control the crowds descending on Nkandla.

The Jacob Zuma Foundation said he would address the media on Sunday.

If the 79-year-old fails to turn himself in by Sunday, police will be given a further three days to arrest him.