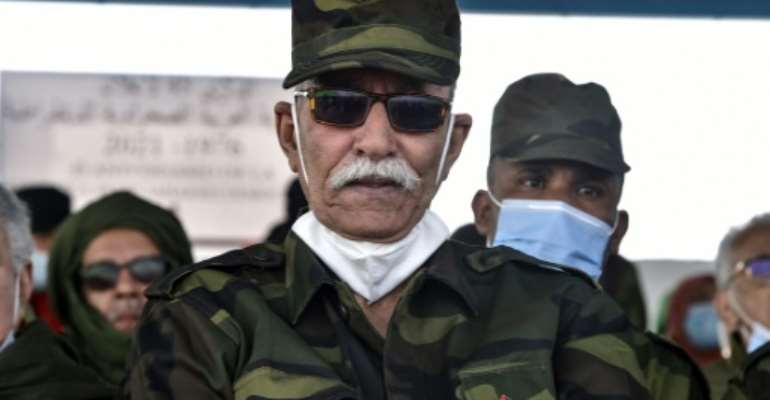 Ghali's hospitalisation in Spain set off a diplomatic standoff with Rabat. By RYAD KRAMDI (AFP/File)

The leader of Western Sahara's independence movement, whose presence at a Spanish hospital sparked a diplomatic row with Rabat, left Spain overnight and flew to Algeria, a government source said Wednesday.

Late on Tuesday, Spain's foreign ministry said Polisario Front leader Brahim Ghali would be leaving from Pamplona airport but did not say where he would be going.

Ghali's departure came hours after he was quizzed by a Spanish judge over allegations of torture and genocide, which he denied, in a video hearing from the hospital in northern Spain where he spent six weeks recovering from Covid-19.

Algeria is the main supporter of the Polisario Front, which has for decades fought Morocco for the independence of Western Sahara, a desert region bigger than Britain which was a Spanish colony until 1975.

During the hearing, the judge declined to issue any precautionary measures such as seizing Ghali's passport or holding him in preventative custody, saying there were no "clear indications of his involvement" in the alleged crimes.

Ghali's hospitalisation in Spain set off a diplomatic standoff with Rabat, sparking retaliation in mid-May when up to 10,000 migrants surged into the Spanish enclave of Ceuta as Moroccan guards looked the other way.

Critically ill, Ghali landed in Spain on April 18 aboard a medicalised Algerian government plane and bearing a diplomatic passport. He was admitted to hospital under a false name "for security reasons", El Pais daily reported.

Considered a war criminal by Rabat, Ghali has headed the Polisario Front since 2016 and is president of the Sahrawi Democratic Arab Republic, a self-declared state in an almost-landlocked area flanking Mauritania's border.

It covers around a fifth of Western Sahara while the rest is run by Morocco.

Rabat has offered Western Sahara autonomy but insists the territory, which is rich in phosphates and offshore fishing, is part of the Moroccan kingdom.

A disputed territory, the UN calls Western Sahara a "non-self-governing territory" whose people "have not yet attained a full measure of self-government".

After 16 years of war, Rabat and the Polisario signed a ceasefire in 1991, but a UN-backed referendum on self-determination has been constantly postponed.

Hostilities resumed in November when the ceasefire collapsed after Morocco sent troops into a UN-patrolled buffer zone to reopen a key road.