Galamsey Fight: A President Oblivious Of The Law Or One Being Hunted By His Past? 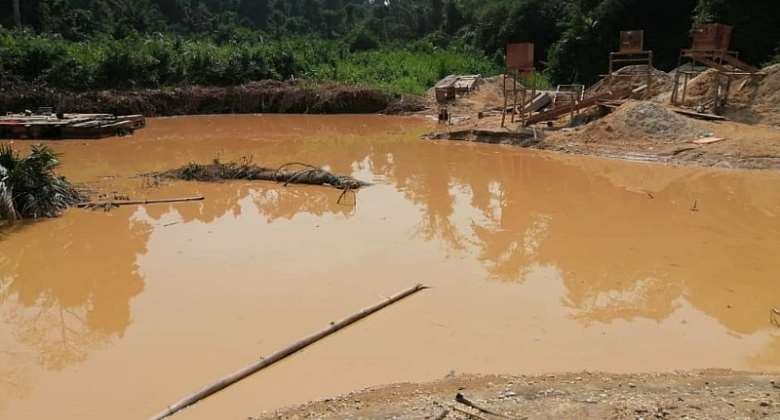 The African wisdom captured in one of its proverbs has it that when the chief of the village speaks, there are no words left to be spoken by the ordinary subjects. This is to say that, the ordinary people expect of their chief (leader) to speak last and to speak their hearts and minds. And in doing so, they expect him to apply the highest sense of wisdom and relative circumspection in order to get the popular voices falling in line.

Over the last week, the President of Ghana, H.E Nana Akufo-Addo, a renowned lawyer, chose to speak to the raging issue of the galamsey menace and the government supposed prescribed solutions (ie burning of excavators on site). He chose no less a platform than at a sod-cutting ceremony for the construction of the Law Village. There is a reason leaders choose platforms to make certain remarks, and the reason for this choice is because the forgoing national conversation is around the wrong application of the law in respect of the fight against galamsey.

When our President speaks, we expect nothing but what will bring finality to a raging conversation and not to further trigger controversy and worsen the situation. It is not for nothing that the President should be briefed and briefed well at anytime he is due for any public engagement.

Interestingly, the President presented quite an irony of an image on this platform. At one end he recounted how successful a lawyer he’s been over the period. And by far, a very renowned advocate and safeguard of the law. In another breath the President, unfortunately, endorsed an illegality; calling for the law to be set aside and applying extrajudicial measures by burning excavators on site instead of confiscating and allocating same to government agencies as required by the existing law.

What is so difficult for President Akufo-Addo and his appointees to amend the existing law to take care of their ongoing action if they so think that is the exact solution to the Galamsey menace? After all, the law (Act of Parliament) isn’t a rigid one which can’t be amended. It has been almost 5 months since he assumed power, if the President was so minded to fight galamsey, the amendment of the existing law could be carried out by setting aside the complex parliamentary process as set out in article 106 of the constitution, 1992, and the amendment effected within a day.

The Minerals and Mining Act, 2006 (Act 703) was amended in 2015 by Act 900 and assented to on the 16th December, 2015. The amendment among others is to provide for regulations to be made for the payment of royalties, the confiscation of equipment used in illegal small scale mining, etc.

Subsection 5 of the amended Act (Minerals and Mining Amendment Act, 2015 (Act 900) stipulates that...”where a person is arrested for an offence under subsections (3) or (4), any equipment used in or associated with the commission of the offence and any product derived from the commission of the offence shall, regardless of the ownership of the equipment or product, be seized and kept in the CUSTODY OF THE POLICE.”

This part of the law is unambiguous as to what the minister of lands and natural resources and/or any other minister or government official so designated to act, should do to the confiscated equipment. There is no part in the law which prescribe burning of the equipment on site. And the word SHALL in the law has made it mandatory and not an option.

In fact, the law allows for the equipment to be kept for sixty days to create room for the government to avoid any future judgement debt. Reason is that some of the equipment may belong to licensed companies, so that they could be returned without incurring any judgment debt. The case of Xtra-Gold mining limited, with the NPP National Women’s Organizer as the General Manager, is one such case that can and would attract judgment debt in the near future.

In making such remarks which in my opinion are reckless, the President ought to have referred to any existing law that supports the burning of such equipment. And if that was done, we expected our Lawyer President who is supposed to be an advocate of the law to now ask the concerned citizens to go to court if they so think otherwise. But to not refer to any law that supports your action and then turn around to ask citizens raising genuine concerns to resort to the court is either one of two things; either the court will always uphold the President’s inadequacies or the President is personally oblivious of the exact provisions of the existing law.

A President being hunted by his own recent past?

In his first term, the President publicly made a solemn promise to fight galamsey, and promised to resign if he failed. Unless I don’t understand the meaning of putting his presidency on the line, if I did then, I should think he should have resigned by now.

If the President is angered by the damage done to our water bodies by the galamsey menace, then he should accept responsibility for the mess before putting any foot forward to act with impunity as he’s endorsed in his remarks.

Worthy to note that Hon Peter Amewu in October 2017 told the country that the President was so interested in the fight against galamsey to the extent that the country was committing as much as $3m to purchase drones and the satellite station to be installed at the office of the President. These drones were expected to be flown at the mapped out forest zones where galamsey is suspected to be ongoing and used to track down the perpetrators. What happened next was history. The taxpayer lost out in this initiative too.

Fast forward, we learnt from the Anass video that the very people at the Presidency who were charged with the responsibility to fight the menace have rather created a conduit around themselves for self aggrandizement and to further the so called interest of the NPP party. At least Anass was later vindicated by the leaked audio which captured the conversation of the minister of environment and other NPP party executives. Of course the Kennedy Agyapong bit also came to add salt to the mess being created by Akufo-Addo’s own henchmen.

Any wonder the King of Ashante, HRM Otumfour Osei Tutu revealed that the very people parading themselves as fighters of galamsey actually know who the kingpins of Galamsey are.

1. Why burn equipment that can be used by government agencies within the galamsey areas to fix their deplorable roads or even dredge the very rivers they destroy?

2. What happened to the President’s promise to put his Presidency on the line in the fight against galamsey?

3. What happened to the 500 missing excavators?

3. What happened to those caught in both Anass’ video and the leaked audio which captured the voice of the minister for environment in the almighty “PARTY HIA SIKA” conversation?

4. What happens to the part of the law which prescribe the arrest of those involved in illegal mining and subsequent prosecution?

5. Is the government resorting to this burning on site as a cover up for their own mess and protecting their own people from facing prosecution?

6. What happens to the other equipment like vehicles and others being confiscated? What about the gold and money the task force seize from the illegal miners?

7. Why should the taxpayer pay for all of these yet won’t get any positive returns in the end but further slapped with nuisance taxes to fix same mess?

A Lawyer President who is supposed to be an advocate of the law cannot be oblivious of it.