Information As A Public Good 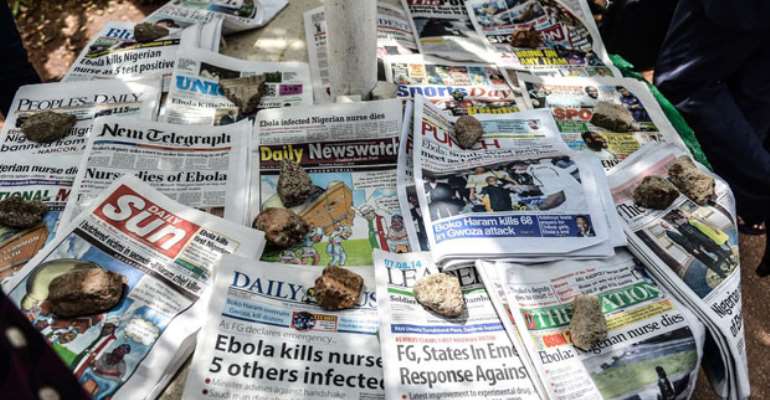 This year's 'World Press Freedom Day' is taking place at a time when the media especially the print are enduring the economic fallouts of COVID-19 just like other business entities.

With an estimated loss of some $30 billion last year by newspaper owners to the pandemic according to the UN Secretary General Antonio Guterres, the industry existence has been excessively threatened.

The immeasurable role newspapers play in keeping in check the excesses of bad governments should not be allowed to be swallowed by the effects of the pandemic.

Newspapers have contributed in no small measure to the development of democracies in our part of the world, a fact we cannot ignore.

It is for this reason that we call for an international response in the form of a fund to assist the many distressed newspapers to stand on their feet again.

We can only imagine the effects of COVID-19-crippled newspapers on the fate of democracies in places where this system of government is in its infancy and already threatened by dictatorships. Bad governance practices have been exposed by newspapers, the effects of which have been positive changes, the slow pace of the changes notwithstanding.

We recognize the role of African journalists in the eventual Windhoek Declaration 30 years ago which pressed for a free, independent and pluralistic African press and the eventual establishment of this great day of 'World Press Freedom Day'. We cannot also forget the support of the United Nations Educational, Scientific and Cultural Organisation and the United Nations which bodies provided the forum for it to happen.

During the historic event in Windhoek in 1991, only three Ghanaian journalists namely: Prof. PAV Ansah, John Nyankumah of GBC (both deceased) and Ms. Ajoa Yeboah-Afari were invited. We have come a long way.

Today, although, we can point at a lot of teething challenges standing in the way of the achievement of total press freedom in Africa, a lot more have happened which call for celebration.

In Ghana the Criminal Libel Law was expunged from our Statute Books courtesy of then Kuffuor's NPP government and this move was spearheaded by then Justice Minister Nana Akufo-Addo now President of Ghana.

We have also witnessed the flourishing of private and independent newspapers and radio stations across the continent credit for which goes to the indefatigable efforts of African journalists even in the face of myriad challenges.

As we mark May 3 World Press Freedom Day, we can state without hesitation that even dictators would prefer to conceal their abhorrence for free press rather do so openly. The tag of 'anti-free press' is something they prefer avoiding because of its obnoxiousness which they recognize especially in the comity of civilized nations.

There is a lot more to be done to enable us to get closer to total freedom of the press. In Ghana we have observed the efforts the government is putting in to ensure that the Right To Information is achieved.

When this eventually takes off in the true sense of the word the media would have traversed a momentous milestone in its journey to free press and access to information without strings.

The theme for this year's World Press Freedom Day 'Information As A Public Good' is auspicious. There could not have been a better elucidation of the importance of information in society.

The goodness of information are varied, the immediate one being how it is used to disseminate facts and not tales or even rumours.

At a time when the public locally and internationally are being bombarded with fake news we need credible news to enable us to relish the goodness of information.

At the height of the COVID-19 pandemic, the fake news mill was active with dangerous killer information, something which was given the garb of infodemics. This dangerous dissemination of fake news has cost the world economically and socially.

We appreciate how on such an auspicious day managers of information come together to share ideas and experiences which go a long way in enhancing the practice of journalism.

Let us celebrate the occasion by resolving to ensure that only credible news is disseminated because only then can we benefit from the goodness of information.