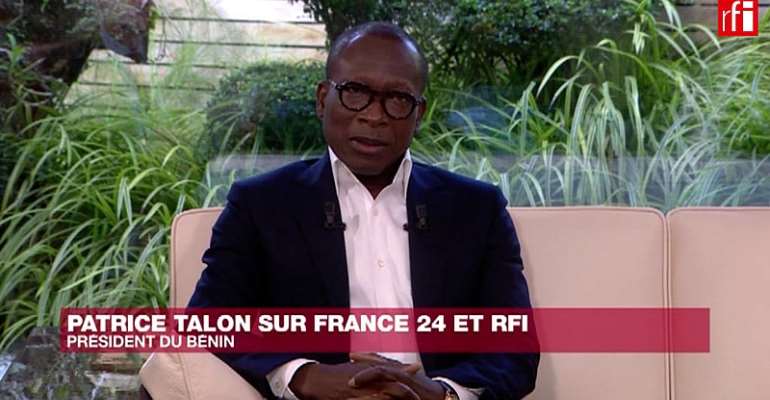 In an exclusive interview with RFI/France 24, his first since his contested election victory on 11 April, following a campaign in which key opposition figures were unable to stand, Benin president Patrice Talon insisted he has no intention of pursuing a third mandate in 2026.

In an interview with RFI's Christophe Boisbouvier and Marc Perelman of France 24, Talon dismissed suggestions that the April election was a charade, declaring that it was a “vote of support for me.”

Talon's victory score of 86.3 percent was confirmed by Benin's constitutional court on 15 April.

Although only 50 per cent of those eligible turned out to vote, compared to a 65% turnout five years ago, Talon said the turnout was “satisfactory”, considering “the conditions”. He described the campaign environment as “quite bad, [with] threats, violence, intoxication”. He also declared that for the first time in many years, “money was not the main attraction for voters.”

Challenged about the fact that all his main opponents were either in exile to escape imprisonment or behind bars in Benin, apart from former president Thomas Boni Yayi, Talon dismissed accusations that democracy was in retreat in Benin and that he was responsible.

Instead, he maintained that some politicians, called to “account for their actions” had chosen exile rather than to face justice.

Predators, drug traffickers
Benin's rulers had over time, he said “become predators of their countries, sadly, in the image of many African countries”. Benin had become a hostage of its political class, a group “which even included drug traffickers.”

Talon suggested that the leaders of neighbouring countries had been involved in an operation to de-stabilize Benin but declined to elaborate or name which leaders.

The president denies that civilians were killed in violence which erupted in the north central part of the country between the 6th and 9th of April when voters, angry that so many would-be opposition candidates were either in exile or in prison, took to the streets in protest.

At the time, he expressed regret over injuries among law and order agents but made no mention of civilian deaths.

Asked by RFI and France 24 if he could say how many civilians died, he rebuffed the idea. “What civilian population? … What are you talking about? Were there deaths among the attackers, among those who shot at police officers? Do you have identities?”

But he insisted he would not change the constitution to allow presidents to serve a third mandate, answering the question “So this is your last presidency?” with “Of course.”