Why John Paul Epistles Are No Longer Necessary In Our Kingdom 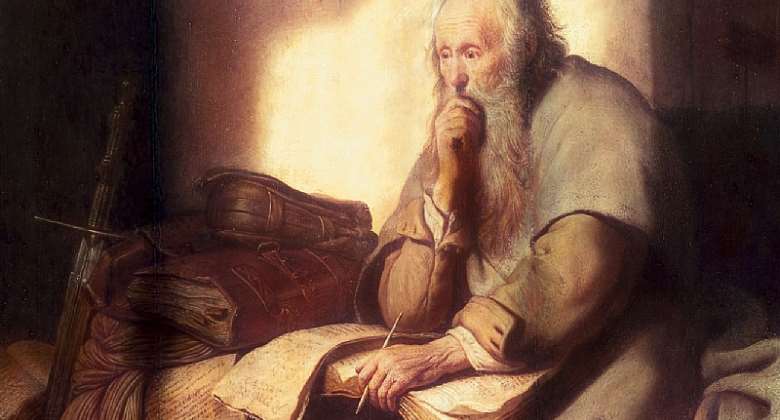 I used to be your ardent listener until you started preaching outside the gospel of truth. I used to read your epistles until recently when they lost their focus of addressing the needs of the weak, the poor, the marginalized, the solitude and the vulnerable. I have read your recent epistle to the Thessalonians. Again, you went to the gutters with yourself as if you were a three-day-old prophet in the ministry. I shudder to think you were a street preacher with a microphone in your hand. Damn it! Why have you taketh this path to destroy this powerful and beautiful ministry? Why are you “filibustering'? The gospel according to Matthew was the first book I had ever read. In it, we are told to tell the truth irrespective of the consequences therein. I read the gospel of John and Luke. They are almost emphasizing the same point. I read the book of Daniel and the book of Esther. The stories about Esther keep intriguing me. Sadly, I read about how the strong powers of Sampson were brought down by Delilah. Then also, the story of how our own Christ Jesus, the son of Joseph and Mary was led onto the alter of betrayal by his own disciple-Judas Iscariot.

Why do I labour to tell you this? Because life has a way of telling us the truth of our lies. Life has a way of educating us on the truth of our misinformation. Apostle Paul told us about the story of the end-time Prophets. He warned us to be wary about them. They come in the form and shape of mortal beings. They will pretend to be sent by God. And they will be perceived to know it all.

I agree that many of us have entered the concrete jungle not so many years ago. Therefore, we may have insufficient knowledge about the city. But we aren't naive about where this country came from. We have read and we trusted our sources.

Our grandfathers met with the colonial administration and told them in the face that this country needed to be free. The latter resisted. They fought. Our grandfathers fought, toiled and shed their blood for the freedom we enjoyed over the decades. In 1957, we became the first country in the sub-region to gain independence through the radicalist approach. We went on to help Guinea to free herself from the shackles of power from France. But our joy of independence was short-lived at mid-day in 1966. Reading the “Voice from Conakry”, it may appear the gradualist of our independence struggle had a hand in that. Then from that day, we jostled in-between the hands of civilians and the military until 1992 when democracy was born. I do not want to recount the periods of 1979-1981. Some of us may not have lived this period but we have scars to show for it. I may not have lived the period in which we conducted our house cleaning exercise but I have scars to show for it. My grand uncle's “funeral” has not yet been performed. He went into exile and the soothsayers have not yet reported his death. And so we are yet to perform his funeral.

My former MP is also a former exile returnee. My uncle Matthew Adabuga is not in Navrongo currently but a political asylum seeker in Canada. Uncles Joseph Awuni and Aloliga Akatabore, all paid a price for the peace we are enjoying in today's Ghana. We had numerous demonstrations in the past for our voices to be heard. The 1948 riot is one and the Kume Preko in 1995 is another. So we came from far. We all know about this.

But during the struggle, there was somebody who made sure the voice of the people which represented the voice of God was not kept in the dark – the Journalist. Journalists have the power to make and unmake the world. They report from the battlefield. They report from Rome. They sometimes report about the White House and they report about the Jubilee House. They decide which story to report based on the ethics guiding the noble field of Journalism. They are powerful and it was our late John Pombe Magufuli who said “a fool should not be given a microphone". It is almost like giving a gun loaded with bullets to a mad man. So journalists are no mean personalities.

It was the voice of a journalist on a radio station that plunged the heads of Tutsi against that of the Hutu in Rwanda in 1994. It was a journalist that reported that people in Tigray region in Ethiopia needed food. It was a journalist who told UNICEF that children in Uganda were dying of hunger and vultures feasting on their remains. So the power of the microphone, a pen and a camera must not be in doubt and the wielders of these must act and speak with reasonable caution.

When George Floyd was murdered in 2020, it took a 17-year-old Darnella Frazier's smartphone camera to get the world's attention about the Systemic Racism in America. Her video helped serve justice for George Floyd. Grandpa Joe Biden called her "a brave young woman with a smartphone camera". Darnella Frazier went on to win the 2020 PEN/Beneson Courage Award from PEN America, for her widely-seen cell phone footage that ignited protests around the world. So that's how powerful a camera can be.

Benjamin William Mkapa rode on the back of a paper and a pen to the Tanzanian presidency. Mkapa was elected as president in 1995 based on his popular anti-corruption campaign when he was a journalist. I have read about and listened to Shaka Ssali. Very astute, renowned and achieved journalist yet humble. I have heard about P.A.V. Ansah. Very eloquent and excellent communicator. I have come to know the author of those Letters to Jomo – George Sydney Abugri. Very experienced, brilliant journalist and well lettered yet simple and humble. I used to stay glued to my TV set when Kwaku Baako Jnr was on a show. Veteran Kwasi Pratt Jnr is my idol of truth and principle. Peter Okoche and Akwasi Sarpong's voices just came only close but not replaceable with Komla Dumor. Very distinguished individuals in their field yet very simple, humble and professional in their line of duty.

Every morning, I always keep my radio frequency at 97.3 FM because of some of the patriotic and developmental agenda-setting that Bernardino Koku Alve and his team would bring on board. They discuss the problems that they face as ordinary Ghanaians. Those problems, I too face them every day. I experience those problems in Sirigu. I see them in Tamale and I experience many in Madina. For example, Bernardino and his colleagues usually talk about road network in Ghana. And what usually comes to my mind is the broken bridges between Sirigu and Kandiga and between Sirigu and Zorko in the Upper East region. They talk about electricity and fuel and transport fares, problems which I face every day.

Dr Randy Abbey hosts the Good Morning Ghana Show on Metro TV, the same TV station and I admire his depth of knowledge, near neutrality in handling panels and absolute simplicity. Lawyer Samson Lardy Anyenini hosts the Newsfile on Joy and he does so professionally. The "hidden guys" also are there. They use their own professional manoeuvres to get the big corrupt guys in our society out of their cocoons. My brother Manasseh Azure Awuni is almost in the same category except that he decided to be a day-time "wizard" catching up corrupt souls at night. Don't get me wrong, I have not declared all of the above perfect. Perfection comes from the high, God.

So I come today asking where John Paul is preaching from. Which book is he picking his lessons from? Is John Paul the all-knowing prophet in this kingdom? Who is injecting into John Paul such 'eloquence' of madness? Why is John Paul always preaching outside the written sermons and principles that guide the behaviour of prophets in our kingdom?

It is about time the bodies and institutions that regulate and guide the tongues of our journalist, wake up from their slumber. In my local parlance, it is not an offence to attack someone in your house but you can't do the same in a durbar ground that serves as a public platform for the community. I don't think we are beginning to be teaching our children how to insult others on national TV. We have already lost our script on the national curriculum and a plethora of these humdrum uncultured and unguided sensibilities could plunge us into fire.

These epistles are becoming one too many and too unprofessional. First, it was a daughter of a long-serving president and an apology was rendered. Second, Manasseh Azure Awuni was severally washed, dried and sometimes fried on that “Thessalonica” platform. And now the Mosquito in our kingdom is caught up in the web, filibustering. Well, the war is not fought by those with microphones and cameras but they have a crucial role to play in preventing wars and conflicts. If you are opportune to have access to a microphone, be wise and use it judiciously. We have many things in this country that journalists need to bring to the attention of the public rather than filibustering and palm wine talking about mosquitoes as if one is "demon-possessed”.