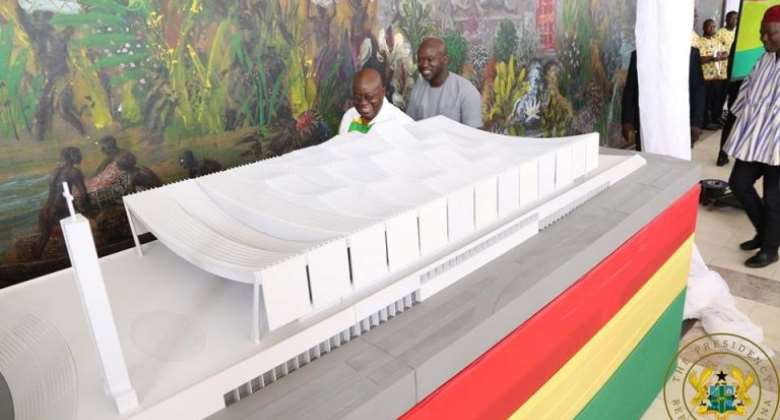 It came at the back of a presidential request for citizens to contribute their quota toward the building of a National Cathedral in our Kingdom. This request came from a man whose government came to power in 2016 through a myriad of juicy and salivating promises. The promises were grand and good enough to see a shameful defeat of the erstwhile government. That defeat remains monumental and historical in the history of Ghana's Fourth Republic democratic dispensation.

Among the million "goodies" promised, is building a National Cathedral for the "God" of Ghana. Fortunately, as a President who "fulfils" his promises, a mystic stone was imported from Jerusalem, for the launch of the Cathedral project in 2019, rather than Larabanga (there is a mystic stone at Larabanga, here in the Northern region of Ghana).

Prior to the launch, there were wide public rejections of the project. The project opponents argued that building a National Cathedral, in a republic where hospitals lack beds and essential commodities, is a misplaced priority. Others argued that the project was going to be a waste of the Ghanaian taxpayer's money especially when such a project would lead to mass demolition of houses of judges and other important structures.

However, the supporters of the project advanced their counter-arguments that the funds for the project were going to come from "God" whose house the President seeks to build. The men who “represent” God on earth amplified the same and argued that the project won't waste the taxpayer's money.

Unfortunately for Ghanaians, one year after the launch, every citizen is requested to pay one hundred Ghana Cedis (Gh¢ 100) (almost $17 equivalent) toward the building of the Cathedral. But this request is nothing new and not uncommon. For instance, President Joe Biden requested American citizens to be responsible citizens by taken the COVID-19 jabs. He went on to promise to provide $100 payments for every newly vaccinated American to boost COVID-19 inoculation rates.

Joseph F. Kennedy in 1961, in a similar vein, called American citizens to not ask for what the nation can do for them but rather what citizens can do for the nation. In 2016, President Nana Addo Dankwa Akufo-Addo asked Ghanaian citizens not to be spectators but active citizens. And I am not surprised if this is one aspect of been active citizens because article 41, of the Constitution of the Republic of Ghana, enjoins citizens to satisfy all their tax obligations and protect the environment. So the call for citizens to contribute toward a national project is not out of place but a misdirected attention, misplaced priority and the powers that be does not need to subject citizens to take a bitter pill for the construction of a National Cathedral.

Before anything else is said, let it be known that I am a devout, baptized and confirmed Catholic and hence would not be against building a house of God. I have often paid my tithe which helps the church, I worship, undertake its developmental projects among which is the building of the Lord's house. So I am not against building a Cathedral but I am concern about the people of Zambulugu and Laatare, in the North East region of Ghana, who have no access to potable drinking water and lack access to quality health care due to poor road network. I am concern and disheartening about the people of Zagre, in the same region, where pregnant women had to deliver at home because there is no nearby health facility and the road linking the community to Gambaga is not only far but unmotorable.

I am concern and frustrated about this because the people of Sirigu, in the Upper East region of Ghana, had to construct their bridges and roads through self-financing (individual citizens’ contribution) because they have consistently demanded from successive governments to provide them with good road network but it had always proved so futile.

I am gravely concern about the schoolboy in Afenasi R/C Primary School, in the Central region of Ghana, who walks close to two hours daily to access education. I am concern about the 12 years old boy who lost his life early this year because there was no bed and equipment to save his life. I am critically thinking about the pregnant woman at the back of a motorcycle, from the remote village in the Northern region, just to access maternal care because there's no ambulance service at her location.

I am sad and thinking about the school children at the Saabisi Primary School, in the Upper East region of Ghana, whose school roof was ripped off by a rainstorm. I am worried about the nurses at the Bugsongo Community Clinic, in the Upper East region of Ghana, who now lives in a dilapidated structure after the rains have taken off their roof. I think about many of my classmates who depend on the daily handouts from friends to survive because they have no jobs.

I can go on and on but what is the point? My point is simple-building a Cathedral is a good thing. However, building a Cathedral, amidst a pandemic that has affected many livelihoods, on the shoulders of citizens can only be seen to be insensitivity on the part of the powers that be and the proponents for the Cathedral project. But rather than contributing to building a National Cathedral, why won’t such monies be tailored toward addressing the crucial and critical needs of the downtrodden citizens of the Republic of Ghana? It is in that just course that I will finally pay the Ghc100 as part of my civic duty to the course of the progress of Ghana.

We should be thinking of contributing to building a model village for the poor in Ghana as has been built for the poor Rwandese by President Kagame.

I am sad, angry and pissed off.