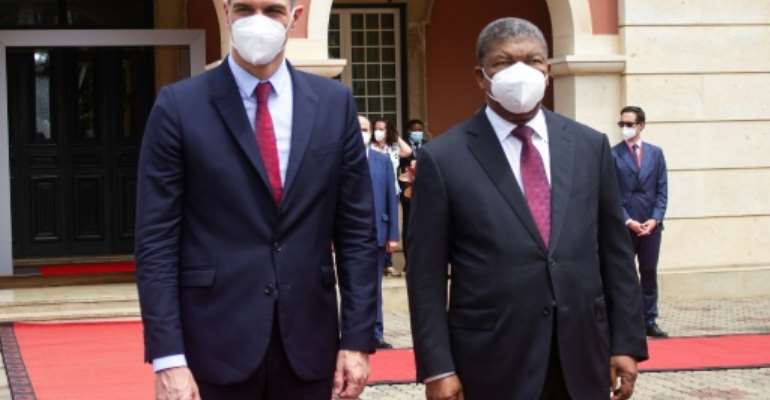 Angola's President Joao Lourenco vowed Thursday to resolve the country's staggering debt in a bid to encourage business investment from Spain, as the two nations seek to bolster their trade ties.

Africa's second-largest oil exporter is buckling under spiralling debt following a decline in crude prices and the economic setbacks of the coronavirus pandemic.

Speaking during an official visit by Spain's Prime Minister Pedro Sanchez, the Angolan leader admitted debt was often an "inhibiting factor" for Spanish entrepreneurs and other potential investors.

"In this regard I want to convey some reassurance," Lourenco said.

"We are making an effort to pay off all duly certified debts, despite the temporary difficulties the country is going through."

Spain is seeking opportunities abroad to bolster its tourism-driven economy hard hit by the pandemic.

Sanchez started a two-stop Africa tour in Angola on Thursday, taking with him business leaders from the engineering, energy and logistics sectors as well as from plane-maker Airbus.

Angola secured some payment relief from Chinese creditors this year, as well as a $488 million disbursement from the International Monetary Fund (IMF).

Sanchez is the first Spanish government official to visit the southwest African country since former prime minister Felipe Gonzalez in 1992.

He flew north to Senegal later Thursday, where he will meet President Macky Sall and discuss efforts to block irregular immigration to Spain's Canary Islands.

Between January and November last year, Africa accounted for 6.0 percent of Spanish exports and 7.0 percent of its imports.

Although modest, the figures were higher than those for Latin America, which stood at 4.3 percent and 4.8 percent respectively.