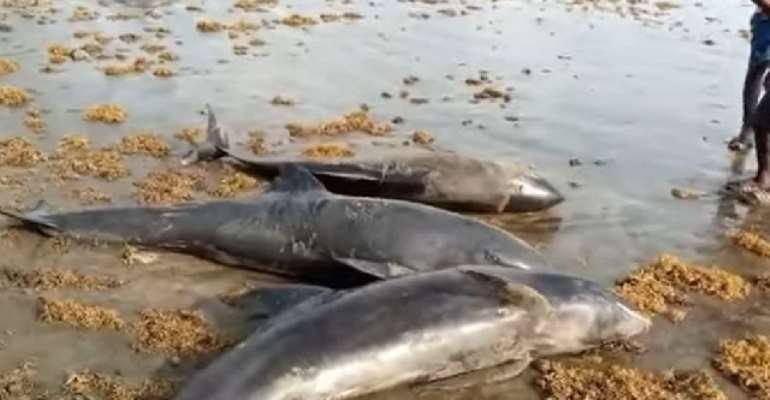 Preliminary investigations conducted so far have revealed that the mass fish mortality on the shores of some beaches in Ghana was a result of stress.

This was disclosed by the Minister of Fisheries and Aquaculture Development Mavis Hawa Koomson.

According to her, she gathered the information from Dr Peter Zidda, a fish health specialist of the Fisheries Commission when she interacted with veterinary doctors of the Fish Health Unit of the Commission to be updated on the progress of the investigation so far.

Ms Koomson, who made the revelation in a Facebook post, noted that further pathological investigations on the gills of the fish, are ongoing and any new development will be made public.

The chief fisherman in Osu, Greater Accra, Nii Djamlodja VI, indicated that washed-ashore fish are seasonally witnessed by the fisherfolk but the recent happening is not normal.

Speaking on Class91.3FM’s Class Morning Show on Tuesday, 6 April 2021, he noted that “normally, these things happen so when it happened, we thought it was the normal thing because by this season, fish used to wash ashore but the quantity is different from what was witnessed in previous years”.

He told show host Kofi Oppong Asamoah that the Assembly, Fisheries Ministry and the Food and Drugs Authority (FDA) visited the scene for investigations.

The fisherfolk, he noted, are waiting for an official report from the FDA to ascertain the cause of the phenomenon and find appropriate ways to dispose of the carcasses.

Nii Djamlodja VI, however, noted that the leadership of the fisherfolk have made sure the washed-ashore fish do not hit the markets because “it will dip sales if something goes wrong”.

The mammals were washed ashore the Osu Castle in the Greater Accra region and Axim-Bewire beach in the Nzema East Municipality of the Western Region.