Story about roles Kufuor, Rawlings, others played in digitizing Ghana that Akufo-Addo and Bawumia may never tell 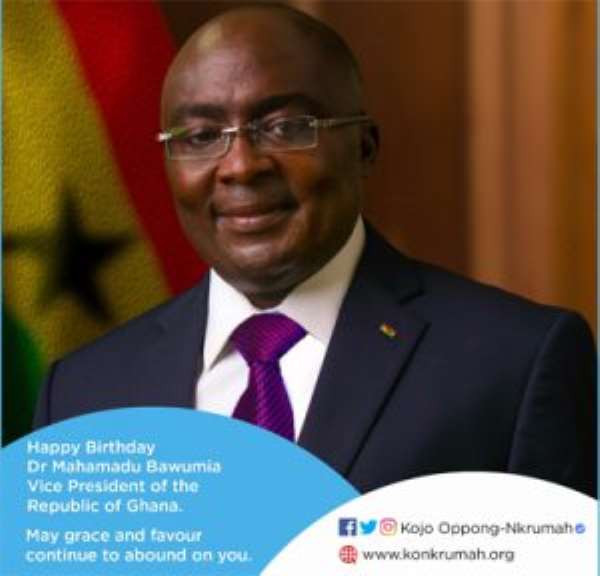 And my mother had a saying too: if a leader cannot appreciate the good works his predecessors did which are contributing to better living in the present, he may also not appreciate your contribution to his ascension to power when his tenure is over.

Honesty and appreciation were two of the key values I learned from my parents to the extent that in my home, we just don't think the cook for giving us a delicious meal, but equally thank the person who went to the market first of all to buy the foodstuffs and the one who provided the cash for the foodstuffs that were cooked, for we know there cannot be any cooking in the first place if there were no foodstuffs.

The act of appreciation and acknowledgment of people's contributions to our personal and national development is key and we cannot downplay it for whatsoever reason be it to gain political advantage or for political expediency.

At each stage of our lives be it at the national or individual level, people make some positive contributions to make things a little better. They deserve some commendation and/or acknowledgment, at least while they are still alive if not when they are dead and gone.

And this for me, is the reason why one Government should not assume office and attempt not to acknowledge other past administrations for contributions they made towards the development of Ghana in certain areas like digitalization and digitization.

I have always held the viewpoint that the best way for an incumbent government to immortalize its achievements is to acknowledge the achievements of past governments because by doing so it is setting a good example for governments that may come later to emulate.

The recent claim by President Nana Akufo-Addo that since Independence in 1957, no Government in Ghana had sought to digitize and digitalize the Ghanaian economy like his administration is currently doing is somewhat quite worrying. It smacks of an effort not to acknowledge the contributions of previous administrations towards the development of Ghana's digital ecosystem.

And it has to be stated that the claim by the President is not one that is true. Indeed, successive governments right from the era of late former President Jerry John Rawlings, have made tremendous efforts to digitize Ghana. And they need to be acknowledged.

Now, I would like to talk a bit about what digitization and digitalization mean and then point out categorically what previous governments have done to bring us to where we are today in the digital world.

Digitalization is defined as the conversion of text, pictures, or sound into a digital form that can be processed by a computer. Digitalization also refers to enabling or improving processes by leveraging digital technologies and digitized data.

In the definition of digitalization above, one word which is of interest to me is "computer." I will tell you why, but first, let us define digitization.

the connection between the physical world and software and it has been existing since the 1960s. Digitization is seen as an enabler for all the processes that provide business value because of the need for consumable data.

In the definition of digitization above, two words of interest to me are "computerized system." Now, why are the words "computer, computerized system" of interest? They are of interest because they are clear indications that for digitization and digitalization agenda to be successful, certain technologies must be available and these technologies including computer technologies have long been available in Ghana before January 7, 2017, when President Nana Akufo-Addo was sworn into office for the first time. That means the foundation for the digitization and digitalization agenda of Ghana were not laid by Vice President Dr Mahamudu Bawumia or President Akufo-Addo, but rather by past Governments of Ghana.

Again, a digitization or digitalization agenda would be somewhat meaningless and less impactful without internet connectivity to allow for easy sharing and easy access to digitized data or digital information. Now, it is a well-established fact that the internet was not first brought to Ghana on January 7, 2017.

According to www.internetsociety.org, in August 1995, Ghana became one of few African nations to have full Internet connectivity in sub-Saharan Africa. 1995 was under the late President Rawlings regime.

The achievement in Ghana's internet connectivity was brought about by cooperation among several organizations, including Network Computer Systems (NCS), Pipex International, The Ministry of Transport and Communication of Ghana, Ghana Telecom, and British Telecom, says the Internet Society.

Indeed, the Internet Society points out that the enormous efforts to get Ghana fully connected was accomplished by Dr. Nii Quaynor and his strong technical team, composed of William Tevie, Joseph Annan, Andy Bulley, and others in NCS. NCS is an Information Technology company providing variety of services in Ghana.

"There have been quite a number of e-mail systems in Ghana over the years, based primarily on Fidonet and UUCP," says the Internet Society. This clearly shows that the whole digitalization and digitization agenda in Ghana took off right from the Rawlings-led NDC Government as far back as 1995.

The former President John Agyekum Kufuor's Government which came into existence in 2001 made deliberate efforts to continue from where the Rawlings' Government stopped as far as digitizing Ghana is concerned. In fact, since Independence in 1957, if there has been any national agenda that was started by one Government and has not been abandoned by successive governments, it is the agenda to digitize Ghana.

In fact, on page 36 of the Budget Statement and Economic Policy of Ghana submitted to Parliament on February 21, 2002 by then Finance Minister, Yaw Osafo-Mafo, it is clearly shown that some level of digitization efforts was made by the Kufuor's Government way back in 2002.

But what is Mobile Money and why does it fit into this discussion? Mobile Money is defined as a digital financial service that lets people store, send and receive money on a basic mobile phone, without requiring a bank account. The keyword for me is "digital."

It would be recalled that in June 2016, the Bank of Ghana released figures showing that Mobile Money transactions in Ghana had grown 20 percent since the end of 2015, reaching Ghc 679.17 million ($177.9 million), that was a huge success of the Mahama's administration.

Financial Inclusion Insights (FII) survey, showed that access to formal financial services in Ghana increased by 41 percent between 2010 and 2015, largely because of the uptake of Mobile Money.

Mobile Money is one of the several means by which digitalization is used to formalize an economy. But it did not start with Vice President Dr Mahamudu Bawumia. It did not start with President Nana Akufo-Addo. It honestly started with the NDC Government in 2009 and continued on a highly successful path until January 7, 2017 when it was graciously bequeathed to Vice President Dr Bawumia and President Akufo-Addo who are also adding onto the further development of the digital space and not rather starting everything from zero as we being made to think.

In fact, under the Mahama's regime, several ICT projects were undertaken. I will discuss a few of them here for clarity or for want of a better understanding.

digital infrastructure and its applications, interventions which have indeed contributed immensely to making life more convenient for millions of Ghanaians and enabled critical services to be extended to the needy in remote and underserved communities.

The digital infrastructure projects undertaken by Mr. Mahama include:

- About1000km of Rural Fiber Network from Accra to Bawku which connects six regions in the country; namely: Greater Accra, Volta, Oti, Northern, North East and Upper East regions. This provides the internet and voice call needs of millions of Ghanaians and thousands of businesses along that route. This fiber network was also extended to the University of Health and Allied Sciences (UHAS) to facilitate research, teaching, and learning.

- A 300km radius Metro Fiber Network within Accra and Tema, with the capacity to offer Wi-Fi and other ICT services to millions of Ghanaians and businesses within the enclave was also deployed.

- An LTE/4G network with over 119 base stations across Ghana, to provide internet services and network backbone support to all Government agencies (Ministries, Departments, Districts, etc.) was also rolled out during Mahama's era. Also, the LTE/4G driven GOTA phones is the terminal equipment for these 119 base stations was rolled out. - The GOTA phones have been used by many security, civil and public servants; and has equally been applied towards the innovative attempts to reduce maternal mortality in the Greater Accra Region.

Regional distribution of LTE/4G in Ghana as of 2016

- The biggest Tier-3 600-Rackspace Data Center in West Africa located in Accra, with a 45 Rackspace back-up on the campus of KNUST, Kumasi was built during the Mahama's administration.

the Accra Digital Center intended to provide about 10, 000 jobs to the youth at full capacity. The Accra Digital Centre has been serving as the incubation hub for established businesses and start-ups, and is a preferred professional examination location, as well as an online passport application center.

In fact, it is sometimes shocking to note how the current Akufo-Addo Government appears to be sounding like such concepts as e-government took off in Ghana after January 7, 2017. Indeed, e-government, e-commerce, social media like Facebook, Twitter etc, had been with us before the coming into office of this current government.

For instance, I will provide some scholarly works below to be sure that e-governance was in existence long before Akufo-Addo and Dr. Bawumia emerged unto the scene as President and Vice President respectively.

The transition of Ghana to a lower middle-income country has been achieved through various reforms that have inured to the benefit of the populace. The need to continuously deliver government services with enhanced efficiency and to raise citizens’ satisfaction has informed the adoption of e-governance, albeit on a piecemeal basis. E-governance is becoming a viable alternative to the traditional bureaucratic means of public service delivery as it promotes open governance.

It restores “trust, including mobilizing citizens or end-users of public services, involving the private sector and civil society organizations in decision-making processes and including stakeholders of all levels of governments in service delivery, as well as developing strategies to facilitate reform implementation” (OECD, 2016, p. 22).

The glamour of digital technologies in public sector service delivery is noticeable in the increasing number of Ministries, Departments and Agencies (MDAs) and Metropolitan, Municipal and District Assemblies (MMDAs) who are interacting with patrons via multiple online platforms.

Most of these MMDAs are either creating new websites or enriching existing content or using social media platforms to boost their online visibility (Owusu-Ansah, 2014; Ghana e-Health Strategy, 2010). Real-time access to information and services and e-participation have been the synergistic effects of this steady transition to e-governance.

These clearly show that Ghana has come a long way in its digital agenda right from August 1995 during the Rawlings'Government. Successive governments after the Rawlings' regime built on the digital infrastructure and laid a solid foundation for Dr. Bawumia to easily use digitization and digitalization to run affairs of the state.

As far as digitizing Ghana's Economy is concerned, Dr. Bawumia can best be described as a "child born with a silver spoon in his mouth." But that silver spoon was left behind for him by former Presidents Kufuor, Mahama, Atta Mills, and Rawlings. They laid the foundation. They brought us the internet.

They brought us computers. They ensured that Facebook, Twitter, etc came to Ghana. Our lives are comfortable today because they had a vision of a better Ghana through digitalization and digitization several years ago. They deserve praises and acknowledgment and not to be told rather than since Independence, no Government has sought to digitize Ghana as we see happening currently.

A/R: Over 500 houses earmarked for demolition in Afigya Kwab...
43 minutes ago