The National Council for Curriculum Assessment (NaCCA) has said the controversial textbooks circulating on social that "distastefully" depicts Ewes, Dr Kwame Nkrumah and the CPP have not been approved.

For the past weeks, three books have drawn criticisms from some section of Ghanaians for the demeaning nature such books depict about the Ewe ethnic group and Ghana’s first President, Dr Kwame Nkrumah.

The public outrage had forced the Council to issue a statement earlier calling on the publishers of the books, Badu Nkansah, to with immediate effect withdraw the said book which was fingered for depicting the Ewe identity in a song.

Some Ghanaians described the books as distasteful, divisive, bigotry and a shame to Ghana’s quest for unity and peace.

In the latest release, the Council notes that “In each of these books and others discovered on social media, the authors make inappropriate references to personalities and ethnic groups which are deemed unfortunate distasteful and are in contradiction with NaCCA’s Book Submission Guidelines”.

According to the Council, the books in contentions are not listed among the approved books for academic work on its website.

The Council assures the public that it has met with Golden Publication, the publishers of two of the flagged books and “has asked them to withdraw all the unapproved offending books stated and any other from the market and submit copies for assessment and approval which they have complied with.”

“Additionally the publishers have been asked to issue an unequivocal apology through the electronic, print and social media,” the statement added.

Meanwhile, the Member of Parliament for North Tongu in the Volta region, Samuel Okudzoto Ablakwa, has filed a question in Parliament for the Education Minister to appear and answer questions on the controversial books.

Mr Ablakwa noted that “I have filed an urgent parliamentary question requesting the Minister for Education to appear before the House and respond to the two bigoted publications in the issue.

“The text of my urgent question is as follows: To ask the Honourable Minister responsible for Education whether the publications titled: History of Ghana, Text Book 3 by Badu Nkansah Publications authored by Badu Nkansah and Nelly Martinson Anim and Golden English Basic 4 authored by Okyere Baafi Alexander both of which contain bigoted content targeted at the Ewe ethnic group have come to his Ministry’s attention; were they approved by any of his Ministry’s agencies and what steps Government is taking to purge our schools and bookshops from offensive, divisive and incendiary publications of this nature?” 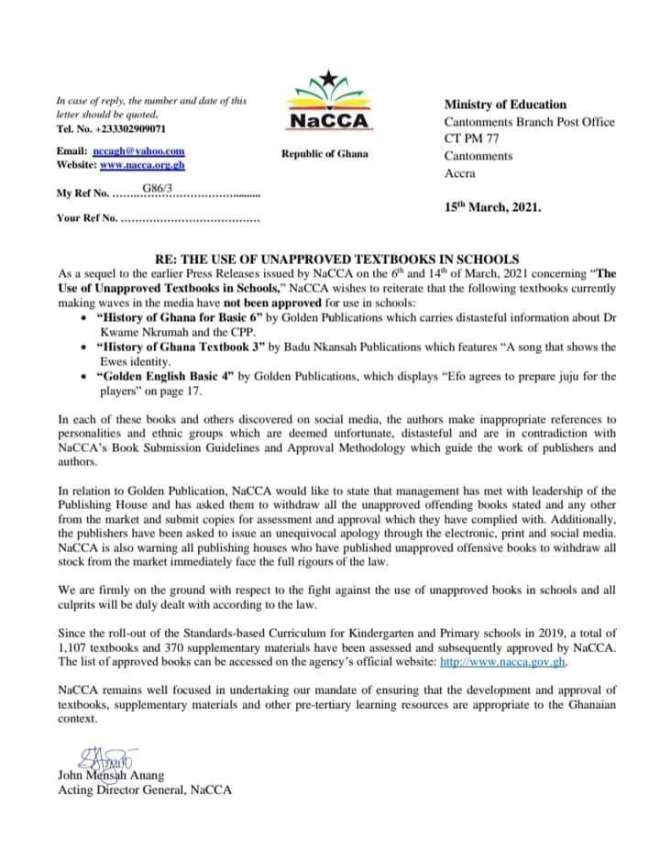