By Gabriel A. Jamie - The Conversation 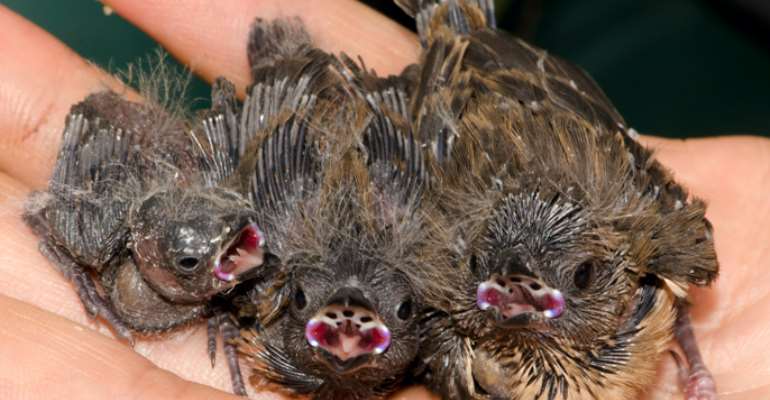 Three nestlings beg for food, but the right-hand one is an imposter, an indigobird masquerading as a firefinch. - Source: Claire N. Spottiswoode

It's a warm wet day in Zambia and the rains are finally falling. A small, scarlet finch flits through the undergrowth, stopping occasionally to check its surroundings. It glances left, right, then left again before evaporating into the foliage. A second passes before an anxious, insistent note issues from within the vegetation. Initially faint, it builds in amplitude until it is joined by others, ultimately breaking into a chorusing crescendo of persistent, demanding cries.

In a small, ball-shaped nest sit four half-feathered nestlings, all clamouring for the attention of the recently arrived adult bird. In a mesmerising display, the chicks wave their heads from side to side, opening their mouths to reveal elaborately ornamented interiors, lined with a complex pattern of coloured spots and swellings.

Eager to provide for its young, the adult, a type of firefinch, sticks its beak into their open mouths and regurgitates the grass seeds it has been storing in its crop. One chick is particularly large, loud and demanding and receives the biggest share of the food. On depleting its stocks, the adult darts off to replenish its crop. In renewed silence, the chicks patiently wait.

The scene we have just witnessed, at the edge of an agricultural field in Choma, southern Zambia, is repeated millions of times each year across Africa and the world. We could easily dismiss it as the expected demonstration of care by a dutiful parent to its biological offspring. And yet there is an important detail that we, and the adult firefinch, have overlooked: among the brood is an imposter.

The unusually large chick is not one of the firefinch's own but an indigobird, a completely different species seemingly masquerading as a firefinch nestling. Indigobirds, and their close relatives the whydahs, are “brood parasites”. Rather than constructing a nest, incubating eggs and feeding young, they deposit their eggs in the nests of other birds (“hosts”) and force them to do the child rearing.

The strategy is a good one. Raising offspring takes time and energy. By outsourcing parental care, brood parasites are free to produce more eggs and to spread these eggs across many nests rather than just one. If something goes wrong, the parent's entire reproductive output isn't lost.

Over several years of fieldwork in Zambia, my colleagues and I set out to test whether nestling indigobirds and whydahs truly do mimic the begging displays of their host nestlings.

Earlier work had provided initial indications of mimicry but technological limitations at the time meant accounts were largely descriptive or anecdotal. Furthermore, nestling begging isn't just visual, it's also vocal and postural. These components are as diverse and specific for each grassfinch as mouth markings are. We wanted to know whether parasitic finches mimic these characteristics too.

Grassfinches are exceptional in that they have the most ornately patterned nestlings of any birds in the world. Some have a luminous papillae lining the gape and intricate patterns of spots and bars on the palate. These markings vary widely between grassfinch species but little within them, making them highly characteristic of each. The diverse appearances of different nestling grassfinch species. The top two rows show the insides of the mouths while the bottom row shows recently-hatched chicks. Many of these species are hosts to indigobirds and whydahs. Gabriel A. Jamie and Claire N. Spottiswoode

The colours and patterns of each nestling grassfinch are important in ensuring parents feed them adequately. Nestlings with “odd” mouth markings are fed less by parents than those with “normal” ones. This suggests that, to convince host parents to feed them enough food, young parasitic finches need to have similar mouth markings to those of their host.

Birds see wavelengths of light humans cannot and also process patterns differently. This must therefore be taken into account to detect mimicry as perceived by a bird.

To test for visual mimicry, we photographed inside the mouths of the nestling birds with a specially modified camera that could detect ultra-violet light as well as human-visible wavelengths of light. These images were processed through models of “bird vision”, so we could see what the parent birds see. To provide evidence of visual and postural mimicry, we sound and video recorded the displays of host and parasite nestlings.

Through this quantitative analysis of parasite and host begging displays we found that nestling parasites do indeed mimic the mouth markings (both colour and pattern) of their hosts. We also showed that they mimic the begging calls and postural movements their hosts make when begging.

Our findings cement these birds as a wonderful example of the power of natural selection to develop astonishing adaptations. Studies like this help us understand how the complex and highly specialised relationships between parasites and hosts have evolved.

Mimicry and the origin of species

Indigobird and whydah chicks have evolved to mimic their host's chicks with remarkable accuracy. This mimicry seems to be genetically encoded rather than learned. When we moved parasite eggs into a new host species' nest and let them grow there, they did not develop begging displays to match the new host but instead kept those of their ancestral host.

This amazing mimicry may have implications for how new species of indigobird and whydah form.

It has long been known that the formation of new species of parasitic finch is tightly linked to host-switching events. Indigobirds imprint on their hosts. Male indigobirds grow up to imitate the song of their host species, while females prefer to mate with males that sing like the host she was raised by. This means if a female accidentally lays her egg in the nest of a new host species, her offspring will imprint on the new host. In so doing, she has the potential to create a new species of indigobirds associated with the new host species – they won't reproduce with indigobirds that associate with other hosts.

Over subsequent generations of associating with the new host species, specialised mimicry of nestling begging display evolves. In turn, these host-specific adaptations may reinforce species boundaries by making it harder for the occasional hybrids between indigobirds associating with different hosts to survive.

Despite its many advantages, genetic specialisation is a double-edged sword. While it equips an organism to be highly effective in one circumstance, it can vulnerable to fluctuating conditions. As the ranges of these hosts shift in the coming decades, driven by climatic changes and bush encroachment, it will be fascinating to see whether these parasites can track their shifting distributions and even adapt to new previously unexploited hosts.

Gabriel A. Jamie's research has been funded by The Leverhulme Trust and the Biotechnology and Biosciences Research Council.

By Gabriel A. Jamie, Post-doctoral research associate, University of Cambridge