Niger opposition figure accused in unrest turns himself in 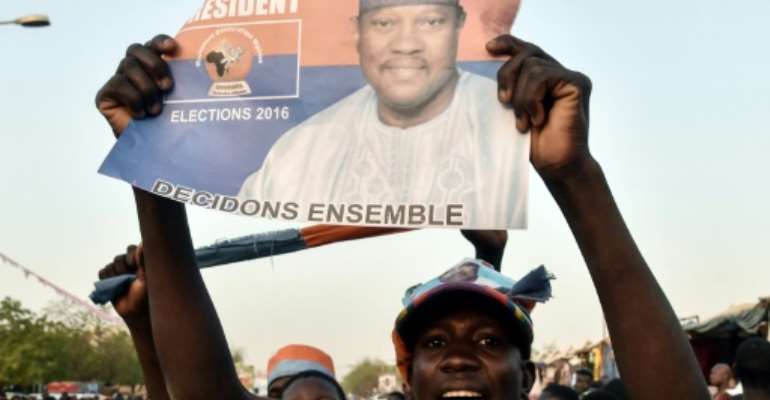 A protester holds up a flier of Niger opposition figure Hama Amadou, who turned himself in to police on Friday. By ISSOUF SANOGO (AFP/File)

Leading Niger opposition figure Hama Amadou, accused by the government of stoking unrest following the release of presidential election results, turned himself in to police in the capital Niamey on Friday, one of his aides said.

The West African country has been shaken by violence since it was announced on Tuesday that ruling party candidate Mohamed Bazoum won the weekend's runoff vote by 55.75 percent to opposition candidate Mahamane Ousmane's 44.25 percent.

Ousmane has contested the result as a fraud and claims that he had narrowly won.

Interior Minister Alkache Alhada on Thursday accused Amadou of being "the main person responsible" for the unrest. The authorities say two people have died and hundreds have been arrested.

"As usual he is on the run, but we will find him," Alhada said.

But a member of Amadou's entourage told AFP on Friday that "he turned himself in this morning to the judicial police with his lawyer, and they are currently in a meeting."

That account was backed up by a source close to the authorities. 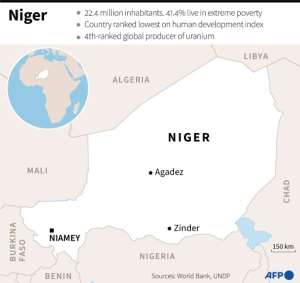 The elections have been trumpeted as a democratic watershed for the Sahel state. By (AFP/File)

Amadou had once been considered the main opposition contender to run against Bazoum, the hand-picked successor of outgoing President Mahamadou Issoufou.

However Amadou was banned from running because of a conviction for baby trafficking -- a charge he says was politically motivated -- and threw his support behind Ousmane.

During the campaign, Amadou lashed out Bazoum for being a member of Niger's ethnic Arab minority, in sometimes very strong comments that several sources close to the authorities said could make him liable for criminal prosecution.

Alhada accused Amadou of "incitement to murder, violence, unacceptable racist remarks (and) xenophobia" and accused him of wanting to come to power by "setting fire" to Niger.

Protests and clashes with police have occurred in several cities since the results of Sunday's vote were announced, and the home of a Radio France Internationale (RFI) reporter in Niamey was ransacked.

The elections have been trumpeted as a democratic watershed for the Sahel state.

It is simultaneously the world's poorest nation according to the UN's benchmark of human development, and fighting two jihadist insurgencies that have forced hundreds of thousands to flee their homes.

Issoufou is voluntarily stepping down after two five-year terms, paving the way for the first transition between two elected leaders since independence from France in 1960.