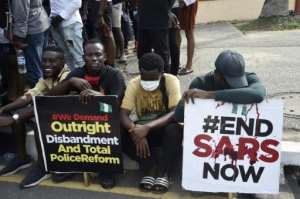 Kwara State Governor AbdulRahman AbdulRazaq received on Thursday a three-volume report from the Justice Tunde Garba-led Panel of Inquiry on #EndSARS protest, promising to set up an implementation committee on its recommendations. With that development, Kwara joined the list of the state whose Panel of Inquiry has turned in reports, and arguably the most consistent in Nigeria to granting victims of police brutality justice.

We all know about the #EndSARS -- the civil rights movement against police brutality and bad leadership which cut across the nation tail end of 2020. It was led by youths who were rightly disenchanted with the Nigerian police system and united in purpose to demand an improved deal from the government.

The protests span for weeks, defying force and other entreaties, to press home the demands of resolute protesters which included that F-SARS should be disbanded; a panel of inquiry be formed by every state government to look into cases of alleged brutality to punish culpable officers and compensate the victims, review of police officers salaries, among other irreducible points to sanitize the police system and make the nation homely to the common man.

Alleged delay in response from authority and poor coordination on the part of the organizers, made arguably the biggest protest in the nation's history become violent and destructive, costing many lives and properties.

However, the agitation eventually got the President of Nigeria Muhammadu Buhari to ban F-SARS (in place of SWAT), and each State Government were enjoined to form a panel of inquiry to ascertain claims of police brutality and dispense justice to the victims.

While some states have managed the issue shabbily, the nation must take notice of the commitment of Governors Babajide Sanwoolu and AbdulRahman AbdulRazaq of Lagos and Kwara respectively. The two have shown responsiveness and consistency not only in implementing but amending the leadership inefficiency #EndSARS debacle unmasked in the nation.

AbdulRazaq, especially, is an unsung hero who has shown he stands head and shoulder above his contemporaries. Right in the heart of the protest, he dived in to walk with the protesters to the police station in solidarity, a brave act which pacified the restless youths. This was about the time his contemporaries elsewhere were allegedly unleashing security agents on weak, armless protesters. Oyo, Rivers, and Abuja easily come to mind. In the wake of the violence which eventually brewed across the nation which was triggered by suspicion of the authority to be hoarding palliative amidst the pandemic, public and private properties were looted in Kwara. What did he do? He condemned the act, warned criminal elements to stay off his state, before proceeding to sympathise with affected private business owners.

It was in that light he announced a recovery fund of #500m grants to relieve them and save their businesses from the doldrums. What is most endearing was that the process of accessing the fund was swift, transparent, and incredibly open to the public. He had empanelled a committee that included one of the affected business owners to work out the support the government could offer to them, before inviting professional loss adjusters to evaluate their claims, to guide the government financial decisions. As we speak, the Shoprite Mall whose ruin reminded one aftermath of the post #EndSARS looting what became of the Owu kingdom, after a combined military force of Ife, Oyo and Ijebu invaded the city as described in Femi Osofisan's Women of Owu, has cut a new look with all the stalls opened back for business. It is confirmed that 49 affected shop owners (including eight security guards attacked by hoodlums) got between N100,000 to N17,000,000, totalling N180, 775, 000.00 only.

What that means is Kwara Governor AbdulRazaq averted the death of businesses, attendant rise in the unemployment rate, and the consequences of hunger and lack in thousand Nigerian families. These are the effects of the post #EndSARS debacle many state governments have not adequately tackled. It is also the right message to send the investors in the business community to favour his state. It won't be a surprise if the State of Harmony rises to become the investment hub of North Central Nigeria in the coming years.

The meat of the piece, however, is his commitment to seeking justice for the powerless. It is most heroic he keeps his courtyard clean to make the youths see others' who speak tongue in cheek to respect for life and liberty. While some panels have not sat or have even forgotten to resume proceedings, welcoming the report which was based on various petitions received, bordering on alleged police brutality, unlawful arrests, extortion, violation of fundamental human rights, and impunity from the panel, at this time, strengthens the principles of democracy, public accountability, and liberty Nigerian youths seek to uphold. Now that he has received the report, I must urge him to adopt and hasten with the implementation of the recommendations, which includes granting support to victims of identified cases of police brutality among other points to improve the living conditions of serving and retired police officers. Others must emulate him now.

From joining the protest to protect protesters to the management of the anarchy that followed and giving prompt financial support to the affected shop owners(which could have led to deepening hunger and hardship in the state), and, now the timely proceeding with implementing the #EndSARS demands, no governor in Nigeria has demonstrated better responsiveness, efficiency, and respect to Nigerian youths dead or alive in recent years. AbdulRazaq, who is also the first and only leader in Africa to form a 56% gender-inclusive cabinet (including Nigeria's youngest commissioner), is proving to be the gift O'toge gave Nigerian women and youths.

Abdullateef is a Writing Fellow at African Liberty, USA