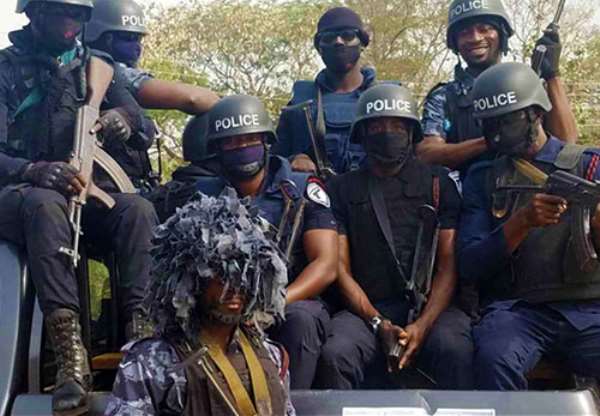 Suicide is not a new phenomenon to policing. It is a complex phenomenon police organizations across the globe are trying to figure out possible solutions to reduce its occurrences and frequencies.

It's a phenomenon that cannot be stopped completely no matter what you do about it, but studies have proven and shown that with the right psychological and mental health structures in place, its occurrences and frequencies can be reduced, especially in police organizations.

Policing is one of the stressful and depressing jobs in the world. The hectic nature of the job demands sound mind, balanced psychological well-being, and mental fitness to be able to survive on the job, and meet its demands and obligations.

Sadly in Ghana, all that matters is that once you wake up and appear to be physically fit and healthy, you would have to be at work at all cost.

So long as you go up and down, no one cares about the state of your mind, so when the going becomes very tough for some officers, they take their lives.

Studies have revealed that long working hours coupled with intimidations, threats of dismissals and disciplinary actions , unfair and unjust treatments are some of the few possible causes relating to rising suicides in the police officers, especially in Africa.

Unfortunately, these conditions are so rife in the Ghana Police Service with very little psychological help and support in times of need. The happenings in the police can sometimes make you so stressed and depressed, and so it not surprising that we are witnessing suicides on the increase in recent times.

A simple google for suicides in the American Police or the British Police will give you a fair idea of what I am talking about. However, in their case, they are conducting a lot of research to find out why their officers are committing suicides and these researches are informing policy directions and strategic decision-making to reduce suicides in the American and British Police.

In the case of Ghana Police Service, it is like no one cares whether officers are committing suicide or not. We have recently witnessed worrying number of suicides in the police which one expected that these unfortunate occurrences of police officers killing themselves would reflect in policies, but unfortunately that is not what we are seeing.

Suicidal thoughts and tendencies are natural inclinations to all humans when the going becomes very tough. A whole lot of things go through people's mind when they are going through hard times. Whereas others would look at brighter side of life, others would want to end it all to free themselves from this world and its problems. What then it means is that, we should be the keeper of one another, but unfortunately we have found ourselves in a profession that heightens your stress and depression levels with almost no one being there when hard times come.

Yesterday, we woke up in the morning to be greeted with the chilling news of Supt/Mr. Macarthy Zenge killing himself at Jomoro with his side arm after leaving a note that he is fed up with life. A Superintendent of police fed up with this life? How? Only him the deceased can tell what really pushed him to take his life. He knows the difficulties he endured to a point that he can no longer bear it and in his wisdom, it is probably worthless to live so he decided to end it all.

A profession which heavily lacks psychological and mental health support systems like the Ghana Police Service is a trigger to suicides in wake of depression and stress. Police Officers are exposed to conditions which heighten stress and depression, and until we have a hollistic approach to these issues and take pragmatic measures and steps to de-stress the Police Service, we may have worse situations of suicides in the future.

Let me refresh your memory on recent cases of suicides in the Ghana Police Service from 2016, and you will agree with me that we are at a stage that we must have police officers routinely made to see psychologists or other mental health experts.

On 25th July 2016, L/Cpl. William Amuzu, who was then stationed with Tema RDF went to the charge office and booked an AK47, and went straight to his house. He shot his mother-in-law, his son and one other before killing himself. It was such a gory scene and a worrying development so one expected that the Police Administration at the time would use that as a case study to begin to put down psychological support systems in the Service, but all that we heard was that they are investigating it and probably they are still investigating.

On Wednesday 25th April 2017, PW/Const. Mabel Agbemefo, who was for bank guard duty booked the riffle, went home and killed herself at Garu-Tempane. The rumor was that she was jilted by a lover for the second time at age 31. This is very unique with most police women especially when they realize that they are not getting lifetime suitors as they expect. Though this lady never left a note, her situation might not be too different from other police women going through similar difficulties.

On Wednesday 12th July 2017, a police officer known as Kofi Owusu, who was then stationed at Kumasi Central Police Station was in the room with the girlfriend when he received a phone call. He asked the girlfriend to go out of the room and the next thing was to take his life. As usual that case is also under investigations even though one expects investigations to be completed by now with appropriate recommendations made to proffer possible solutions to the seemly rising suicides in the Ghana Police Service.

On 6th January 2019 at about 2.30am, Sgt. Emmanuel Amede, who is stationed with SWAT, but resides at Nungua police Barracks, ordered the wife and children to go out of the room, and before the wife could shout for help, he had shot himself with the AK47 in the throat. The luck here is that the Sergeant did not kill his wife and children as it happened in the case of L/Cpl. William Amuzu who killed the mother-in-law and two others before killing himself at Tema in 2016.

On 25th March 2019, Sgt. Fuseini Mahamuda killed himself and left a note behind that he is innocent of a crime he is being accused of. Even though the Western Regional Public Relations Department of the Ghana Police Service at the time said they were not aware that Sgt. Fuseini Mahamuda was being held for criminal charges, there had been report of cable thefts at the Osagyefo Barge where he and others were guarding. Wrongful accusations in the Police Service coupled with frivolous Service Enquiry is a subject on its own to be discussed at another time.

Then the case of Supt/Mr. Macarthy Zenge yesterday at Jomoro in the Western Region. Of course no one can blame the Police Administration if an officer places a gun on his own head and shots himself to death, but we can express concern about the lack of psychological support systems in the Ghana Police Service.

Hopefully, the Police Administration this time with the death of Supt/Mr. Marcathy Zenge, will start to create structures and support systems in an effort to reduce suicide by officers in the Ghana Police Service.

A lot can be done.

Involve chiefs in galamsey fight – Otumfuo to govt
44 minutes ago