We Have Made It Nonetheless 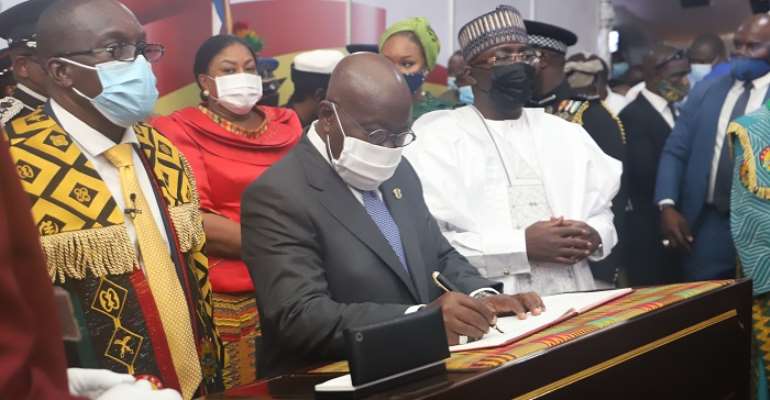 It is all over and President Akufo-Addo has been sworn in alongside Vice President Mahamudu Bawumia for another four-year term at the helm.

The event, colourful and significant as it was yesterday, came against the backdrop of threats by some political killjoys to abort it.

Audios were disseminated on social media intended to send fear among Ghanaians about a pending bloodshed to dwarf the occasion. This regrettably has brought to the fore the crazy investment made towards creating an atmosphere of instability in the country.

We have as a nation learnt lessons from the events leading to yesterday's activity and the occurrences it attracted in the House of Parliament.

Some developments which occurred yesterday although nasty and avoidable have unfortunately been recorded in the annals of the country.

It is unfortunate that the other side of the House refused to take part in the ceremony, a national activity. We would have expected them to join in the constitutional procedure as they await the outcome of the adjudication on the case they lodged with the Supreme Court.

With a House near even in terms of numbers, it behooves members who cherish more the growth of this country than winning the next elections to work together to push forward the Ghana agenda.

It is our hope that sense will dawn upon the sulking MPs and they will review their opprobrious action which under the circumstances is incompatible with their promise to their constituents to serve as their representatives in the august House.

We are encouraged by some important highlights of the President's inaugural speech in Parliament, which we urge the deserters to embrace for national development and growth.

Of particular importance is his call on Ghanaians to be up and doing.

The task of nation-building is a shared responsibility to be borne by both the government and the governed.

For the people to be up and doing, they must understand the policies being laid out by government.

The missing link between policies and their comprehension by the people is responsible for the challenges faced by such projects in some instances.

We encourage government to consider as a matter of urgency the incorporation of education of the public about policies which are by and large intended to better their living conditions.

While the benefits of some policies are unconcealed as in the case of the free SHS, others need explanation for comprehension, acceptance and support.

The sincerity of President Akufo-Addo attribute, which other politicians lack and therefore giving politics a negative image, is what stands him apart from others.

It is on this score that his promise of addressing the infrastructure deficit facing the country is a matter of excitement.

All said and digested, a constitutional requirement of an election and inauguration have both been accomplished and Ghana's democracy has been enriched.

Inside Politics: Political Quotes
Catch up with all the political quotes from our politicians.
Sponsored
More Editorial
Modern Ghana Links
Callous and unprofessional
Vaccine nationalism and us
Sanction face mask defaulters
Reaction swift, appropriate
So much noise about nothing
The President’s Lieutenants
The Stubborn Story
Editorial: Four more to do more
And Finally A Decision
Election Reports Quotes Dossiers
TOP STORIES