The Senate Runoff Elections In Georgia, USA, Was A Triple Triumph For Joe Biden 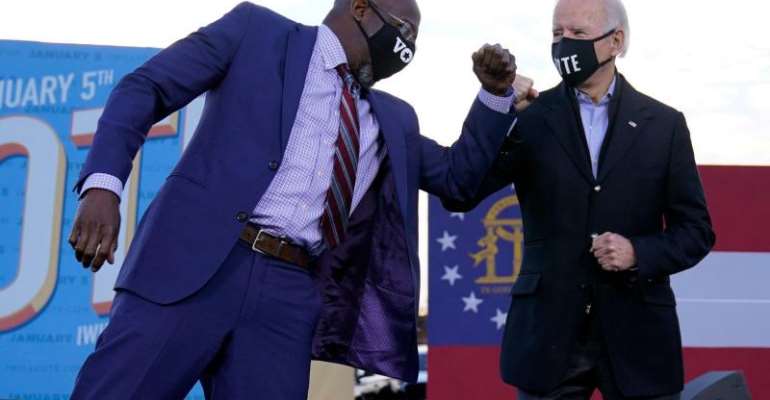 The U.S. president-elect can govern through after the successes of two Senate candidates. The election of the African-American Raphael Warnock is historic.

The first election of the new year in the U.S. has a clear loser and his name is Donald Trump. In the past two months since his defeat on November 3rd the president-elect had tried everything to turn the Senate runoff elections in the southern state of Georgia into a fateful elections in which the future of the country would be decided.

He has raised doubts among his supporters themselves about whether it makes sense to vote at all with his conspiracy theories about alleged voter fraud. And he has put his own party to the test. Those who do not follow him to his foreseeable doom have been condemned by him.

If not only Democrat Raphael Warnock, whom U.S. broadcasters already declared the winner in Wednesday night's runoff with incumbent Republican Senator Kelly Loeffler, but also Democrat Jon Ossoff, who was slightly ahead of incumbent David Perdue in the morning count, moves into the U.S. Senate, it will mean a triple victory for the U.S. President-elect Joe Biden. In addition to the White House and the House of Representatives, Democrats would then control the Senate.

For the first time, an African American represents Georgia in the U.S. Senate that's because a double election victory would help Democrats break a tie (50-50) with Republicans in that chamber of Congress, which Vice President-elect Kamala Harris, as Senate leader, could then break with her vote in favor of the administration. Among other things, the Senate confirms presidential nominees to government posts. Moreover, if Republicans do defend their majority, they could block bills proposed by the Biden administration

Warnock will be the first African American to represent the actually conservative state of Georgia in the U.S. Senate. For the past 15 years, the pastor has led the church in Atlanta, the state capital, where the civil rights icon Martin Luther King also preached. Above all, the enormous turnout of blacks was decisive for this victory: Their share of the votes cast was even higher than in November presidential election, in which Biden became the first Democrat since Bill Clinton narrowly win Georgia in 1992.

The 51-year-old made clear during the night just how significant Warnock's victory is for African-Americans, but also for himself. He said his mother used to "pick other people's cotton." Now her youngest son will become a U.S. senator. "Tonight, with hope, hard work, and the people on our side, we showed that anything is possible." His losing competitor, Loeffler, refused to concede defeat.

So fierce were the attacks by the Trump camp on state politicians belonging to their own party that they felt compelled to openly rebel against them. The outgoing president's allegations were "demonstrably false," Gabriel Sterling, one of the people in charge of Georgia's elections had said on Monday. "We have allegation after allegation with zero evidence. Zero." On Sunday, a recording of a phone conversation the president had with Sterling's boss, Georgia Interior Secretary Brad Raffensperger, had been released in which Trump urged the latter to find 11,780 votes for him so he could win the state after all. Raffensperger, himself a Republican, said in a TV interview that he had the recording released after Trump misrepresented the content of the conversation on Twitter.

The enormous sums both sides spent on the campaign also show how charged these runoffs were. According to the company "Adimpact," around 480 million dollars were spent on ads and other election advertising.