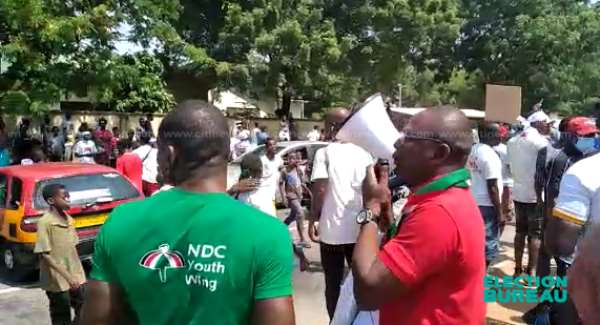 The continuous attacks being rained on various institutions of the country just because Mr. John Mahama once again lost a presidential election is unacceptable. It appears the peace we have in the country does not favour the NDC and the chaotic events that keep happening is a well carved out plan of the NDC to a purpose only known to them.

The likes of Samuel Ofosu Ampofo who was caught on tape to have arranged for kidnaps, killings, arson attacks and many others, Sammy Gyamfi who has on national television threatened the military and police, Inusah Fuseini who is calling for parallel government and Mr. John Mahama himself who has said that the entire media fraternity has been corrupted against him and leading members of the opposition in Ghana and this make such unfounded statements very poisonous to our democracy.

Recent amongst them is the disrespectful Samuel George, an NDC MP who has also threatened the Electoral Commission, Interior Ministry and the Ghana Police because Minority MPs were stopped from holding an unlawful parade. To whom much is given much is expected and as MPs they were expected to have followed legal procedures to demonstrate.

His arrogance and ignorance of the law make him feel on top of every security personnel in the country plus workers at the Interior Ministry and the Electoral Commission. No one will stop you from disagreeing with the work of any institution but to threaten them, you may have to be a demigod.

Touch wood, should power change hands Sam George should know that we the citizens will not allow for the NDC to mistreat the security, media, and many other institutions that they have threatened. They shouldn't be overly desperate to mount the seat. They can burn every market, every office and block every road the power as given by the people will not change.