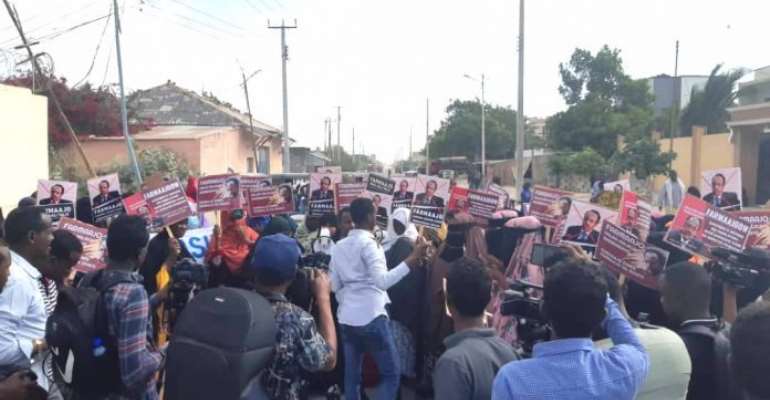 MOGADISHU, Somalia 17 December 2020 – Somali Journalists Syndicate (SJS) expresses its deep concern about the acts of targeting of journalists with arbitrary detention, restrictions on access to information and physical threats by the security forces during anti-electoral process demonstrations in Mogadishu on Tuesday 15 December 2020 and the threats by the Minister of Information against the journalists and the independent media.

On Tuesday morning, plain-clothed officers from the National Intelligence and Security Agency (NISA) accompanied by armed police officers detained four journalists: two Radio Kulmiye reporters (Ali Elmi Salad and Zakariye Mohamed Salad) and two Dalsan TV journalists (Abukar Ahmed Hassan (Dayah) and Abdirizak Ali) who were on their way to cover the protests in Kaaraan District, Mogadishu. The plain-clothed officers first stopped the journalists and started beating them before searching the cameras and questioned them about their assignment, according to three journalists interviewed by SJS. They were held at Abdiaziz Police Station for at least three hours and were freed without charges. Police confiscated journalists' equipment including cameras and phones but later returned.

During mid-day on Tuesday, armed police officers stopped and briefly detained two Universal journalists: reporter Mohamed Ibrahim Bulbul (member of SJS) and cameraman Abas Abdi Hashi at San'a junction in Yaqshid. After questioning, they were allowed to go to their station.

Almost all journalists covering Tuesday's demonstrations reported that police and NISA officers blocked them and denied accessing the roads on the way to or from the locations of the protestors. TV crews told SJS that they were forced to hide their equipment while going to the protest sites to avoid being arrested by the police during the protests.

Meanwhile, the Somali Federal Minister of Information, Osman Abokor Dubbe, through the government-run SNTV on Tuesday, threatened independent media houses and their journalists with legal consequences for breaching the Media Law by covering what he described as “propaganda, lies, rumors and inciting the public”.

“The media law forbids propaganda, lies, rumors and inciting the public. All of these are illegal,” the Information Minister said “Any journalist who works to report violence, incitement and unrest is of course against the law. We do not want to see anyone taking the law with their hands and doing whatever they want.”

SJS calls for the government officials and their security forces to stop targeting journalists with arrests and physical threats including weaponizing the law in an attempt to silence the free media.

“We condemn the arbitrary arrests of the four local reporters on Tuesday who was targeted by the police and NISA just because they were covering opposition protests in the capital. Journalists are braving numerous dangers only to witness and report what is happening in the streets and they should not be harassed or arrested for doing their job,” Abdalle Ahmed Mumin, the Secretary-General of Somali Journalists Syndicate (SJS) said.

“We call Somali government officials and the security officials to rescind any order that seeks to silence and censor the independent media coverage and stop intimidation against journalists working to present the news of the protests related to the elections,” Mr. Mumin concludes.