The Wicked Flee when no One is Pursuing Them – Hon. Martin Amidu 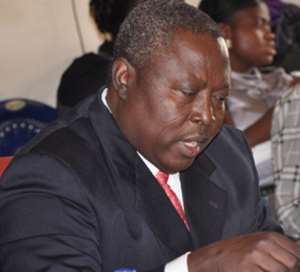 The bible in Proverbs 28:1 says, " The wicked flee when no one is pursuing them, but the righteous are as bold as a lion". This particular biblical verse on fleeing does perfectly fit, or apply to, the former Special Prosecutor, Hon. Martin Amidu. Unfolding events do confirm how wicked he was in his post as Special Prosecutor. While he was intentionally doing nothing in relation to the duties for which he had been appointed, a schemer as he was, he was coming out from time to time alleging that he was not being resourced sufficiently to enable him to perform his functions as Special Prosecutor.

As wicked and liar as recent developments have revealed him to be, he could no longer stand the heat in the kitchen but to bolt, squealing like a pig. He offered all sorts of unnecessary excuses in attempts to justify his inability and incapability to prosecute even a housefly, let alone, one corrupt official. He came out lying that he had not been paid his monthly salaries ever since he took up the job. He is lying. He said President Nana Akufo-Addo had been trying to interfere in his job. This is a complete balderdash.

Giving him the benefit of the doubt that the President indeed interfered in his job with regard to the Agyapa Royalties deal, what investigations and prosecutions had he done previously, thus, prior to the Agyapa Royalties deal? Had the President tried to unduly influence him from the very inception of he taking up the job? Was it the President who was asking him to refuse all the four buildings sought for him, and by him, for his office, hence not being able to do his job because he had no office? How again had the President interfered in his job as INDEPENDENT as his office was? This guy is a complete joke!

"Dogs that bark a lot don't bite". This is true. So has Martin Amidu always been, a vindictive loudmouth but hollow inside. Apart from his relentless endeavour to squeeze the balls of that disgusting thief, Alfred Agbesi Woyome, to get him cough the money he, Agbesi, had dubiously stolen from Ghana, who else has Amidu taken to task?

Again, people who talk a lot do little action. Martin Amidu publishes copious responses when his integrity is questioned. Nevertheless, he is unable to achieve results. Truly, many a Ghanaian, including myself, made the most regrettably mistake by recommending Martin Amidu to the President for that first-ever position of Special Prosecutor in the history of Ghana. Truly, it is said, "Don't judge a book by its cover". Nonetheless, we judged Martin Amidu by his momentary show of honest service to Ghana fighting Alfred Agbesi Woyome, unbeknown to us that he was only a charlatan.

I am so disappointed in Martin Amidu for how he deliberately deceived Ghanaians by doing nothing purposeful in his post, but to craftily shield his NDC crooks as well as other officials from other political parties and public services.

Let it be known to Martin Amidu that any plans by him to enhance his political or public service career is truncated forever. This is subsequent upon his deplorable inefficiency, or deliberate attempts, to scupper President Akufo-Addo's vision to fighting and conquering official corruption in Ghana.

Martin Amidu must bury his head in his palm in shame.

Let him understand that as "fraud vitiates all contracts", so does his criminal action in his post as Special Prosecutor taint his image for good, despite any good thing he might have previously done.

His tactful distraction to get Ghanaians talk about him, and leaving the campaign behind to facilitate the chances of NDC will not work.

To conclude, I shall advise all discerning Ghanaians to see him as a crook who is harbouring a personal selfish agenda of either becoming the President of Ghana one day heading the NDC or sabotaging the forward ever dream to develop Ghana as is in implementation by President Nana Akufo-Addo. Simply disregard him. Let us continue with the campaign to chalk four more years for Nana to do more for Ghanaians and mother Ghana.

Has anyone chased Martin Amidu out of office? No! Because of being wicked, he is running away without anyone pursuing him. GOOD RIDDANCE!!!