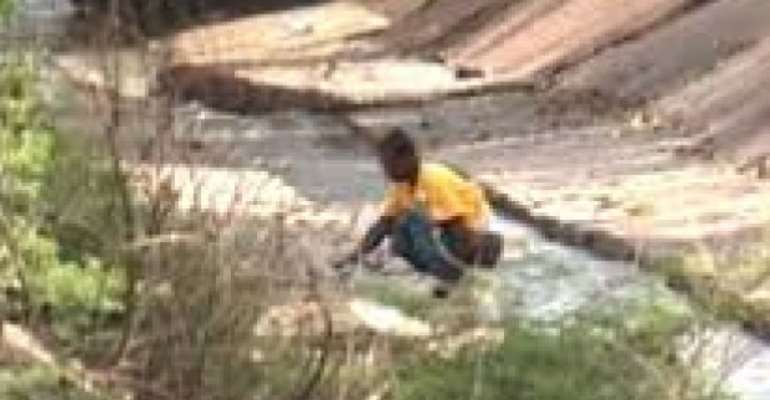 It is still common to see adults attending nature's call by the side of the road in some parts of not rural Ghana but the nation's capital.

Indeed, in the rural areas certain taboos prevail which do not support the reckless attendance to nature's call in the open and even close to water bodies.

The taboos have gone a long way in ensuring that decency in this regard is maintained.

On the side of the road as one commences a return trip to Accra from Tema and in the general area of Ashaiman, as it overlooks the Motorway, the spectacle of squatting adults 'doing their own thing' is common.

The same spectacle prevails in other parts of Accra, especially where large gutters make their way towards the sea. These serve the needs of both normal persons and the many lunatics who crisscross the streets of the city.

A few days ago World Toilet Day was observed and member countries of the UN marked it in their respective fashions.

The challenge of the absence of toilet facilities as it is tied into the sanitation issue is a characteristic of developing countries such as ours.

Although more toilet facilities have sprung up in the nation's capital, the increasing number of persons from the hinterland is putting pressure on the existing public places of convenience.

The privatization of such facilities, which before then was the task of municipal assemblies and others, has witnessed a certain level of improvement.

Such improvement has however, not eliminated the incidence of open defecation occasioned by lack of facilities.

Most existing toilet facilities are user-charging, something which for some is beyond their means.

Even before the existing challenge of a few toilets serving an increased population, it is our submission that certain brackets of persons be allowed free access to the toilets regardless of their being privately managed. We think that the assemblies in which they operate can fashion an arrangement by which a certain subsidy can be paid to the managers of the facilities.

The assemblies should operate dormant by-laws which demand that landlords provide toilet facilities in their property.

Those who fail to meet this standard should be sanctioned accordingly. We think that when houses are fitted with such facilities the spectacle of open defecation will be greatly reduced.

The dangers posed by open defecation, it will appear, are lost to those engaged in the anomaly. It is therefore incumbent upon the assemblies that they mount education programmes about the dangers of open defecation in their jurisdictions even as efforts are made to reverse the deficiency of toilet facilities.

We also think that the prevalent practice in the other hemisphere, by which supermarkets must mandatorily have washrooms, be replicated here by the authorities.

We can hardly think of such facilities in the existing malls or supermarkets in Accra let alone in other parts of the country.

Customers should be able to visit washrooms when they turn up to buy their groceries or other items.

We pray that when we are commenting on the issue of toilets next year it will be positive news about adults not finding it necessary to squat by the roadside to attend to nature's call.