A Journey with Cherlla Atea, Kojo Biney and Siisu Sulley 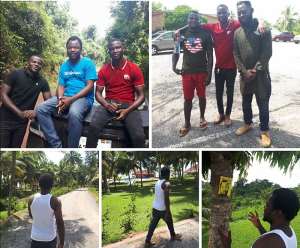 Ghana is a beautiful country. But you would only know this if you start touring around and visiting towns and villages in almost every region. The green vegetation, the oceans, lakes, rivers, dams, streams, springs, wells, ponds, the birds and other living creatures, the mountains, valleys, hills and many other natural and man-made things beautify our environment. If this place is given to some other people to settle, I believe within a decade or less, they would make it one of the most beautiful places on earth, just like Paris and Dubai.

Journeying through the Central, Western and Western North Regions is quite an experience. I saw how beautiful that part of the country is, if only we have good and visionary leaders who do not only come to office because they want to have access to the public purse to live extravagant lives, but are genuinely interested in the development of our country, no Ghanaian would ever want to travel abroad in search of greener pastures.

Travelling through these regions, one major headache that we encountered is bad and dusty roads. Some of them were partly fixed or tarred by former President John Dramani Mahama. But my shock is that mining activities are always ongoing in these regions and they have enormous resources like gold, diamond, manganese, forest and others and deserve a bigger share of the national cake, but our leaders seem to be indifferent about the plights of these people.

He passed, on 26th August 2020. I had spent the night before in Tema with Cherlla Atea and early in the morning, I got the news from my wife that her dad had passed on that night. It was shocking, because he was not really sick, though a BP patient.

I had to quickly put my stuff together and go to console her as we plan on what to do, while we pay a visit to her other bereaved relatives.

But guess what? I was actually arguing with Cherlla early that morning on whether I snore or not. He claimed I snored during the previous night, but I doubted him because nobody ever told me this, not even my wife. She had never told me or ever said anything to suggest that I snore. Not even my ex-girlfriend ever told me anything of that sort before. So it was pretty difficult for me to accept that I snore, but he insisted that I did snore the previous night, to prove him wrong, I picked up my phone and rang my wife just to ask her if I indeed snore. She picked up the call, I said good morning, how are you and Manku? She said fine.

I went straight to ask her the question about my snoring, in a sluggish voice, she said yes I sometimes do snore, but it normally depends on my sleeping position and when I am exhausted. Then she went ahead to break the news about her father's sudden demise to me. The phone was on speaker, so my friend could hear everything she was saying to me.

I was immediately short of words, speechless if I may say. It baffled my friend's imagination that she could take her time to answer all my unimportant questions before telling me something as grave as her father's demise. But I was not astonished about that, because I knew she is a very patient human being. I guess it is one of her strengths. She mastered that quality of calmness-- I cannot tell when or at what point in her life, but I think it is her nature. Her composure that morning wowed my friend. He sang her praises.

I encouraged her to be strong. And I told her that I was leaving behind whatever I was doing, and coming immediately to condole with her and the family. After we finished talking, I rang my family to tell them about the news. Then I took my shower and left for home. My plans for the week crumbled. Everything had to come to a halt. I was busily carrying out an important project, but here was the news of my in-law’s sudden demise, it meant that I had to cut short or suspend whatever I was doing to commiserate with them. And I did exactly that.

But the wonderful thing here was that I had thought about him a little bit that dawn, I would not say it was a dream, perhaps a reflection sort of. I had a funny feeling about him deep down in my mind, then early in the morning, the news of his demise was broken to me. How could I even explain this feeling to anyone? I just kept it to myself. It is something I usually feel if anything awful is about to happen to any of my loved ones. The feeling is unexplainable and I often struggle to figure it out myself. Sometimes it happens to me like a dream or trance.

The last time I had a face to face long chat with him was when I lost my child. On 30th July 2018, around 7:30 pm, at a private clinic, I lost my child at birth, due to pregnancy complications. It was a baby boy and I had planned to name him Pumaya. He lived for just a few minutes I guess. It was the fault of the medical officers, but I let go of every pain and bitterness I felt that evening because I am fully aware of the systemic failure of our country.

The following morning, he visited us in the clinic as his daughter was still on admission and gave me some words of encouragement. During the birth of Mankudivi at the Ridge hospital, I spent days with this man as his daughter was in labour. He was a staunch Christian and would tell me not to worry because he had organised prayer warriors in the Dzorwulu Methodist Church who were praying for my wife to have a safe delivery. I would chuckle and thank him.

I was very impressed as he and his wife played an instrumental role during the birth of my first son. I had a cordial relationship with him. May his soul rest in perfect peace. He got a befitting burial as his family desired. Many people travelled from far and near to honour his funeral, including a delegation from his church, the Methodist Church in Dzorwulu.

For the first time in my life, I travelled to Enchi, Bogoso, Tarkwa and Takoradi and other smaller communities on my way to the funeral. We intermittently stopped to eat and did some sightseeing. These are all beautiful towns and cities, but the roads linking to each of them are terrible and need to be fixed and tarred. We need asphalt roads that can be used for many years to come, like Dr Kwame Nkrumah constructed the Tema Motorway.

When we were coming back to Accra, we slept over at Kojo Biney's place in Cape Coast. We had reached his place around 8:00 pm or so, and decided to have some rest. “Night travel” is not something I am fond of, neither is Cherlla, Biney or DNF.

The following morning, we got up early, took our bath and left for Elmina where we visited the Coconut Grove Resort. The road to the resort is terrible and we just could not understand why the owner with this huge investment could not just fix the road to his own property? Anyways, I took some baileys as usual and some coconuts as we engaged in meaningful conversations about life and the rest is history….

You're an 'irresponsible' bunch for 'running away' from own ...
47 minutes ago

COVID-19: Omicron not detected in Ghana – GHS
51 minutes ago