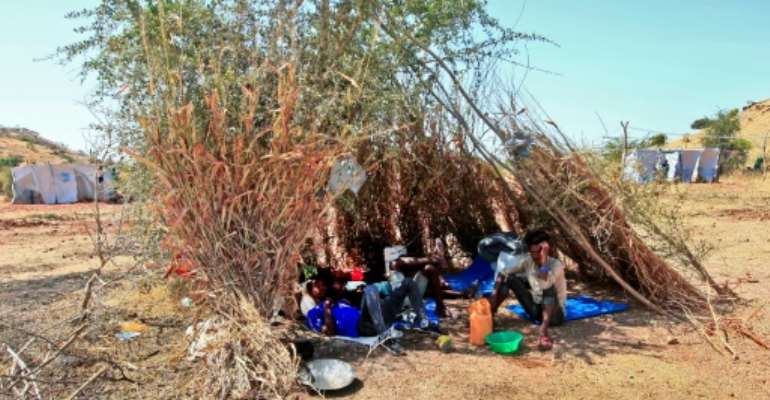 Ethiopian refugees who fled fighting in Tigray province lay in the shade in a straw shack at the Um Rakuba camp in Sudan's eastern Gedaref province, on November 18, 2020. By Ebrahim HAMID (AFP)

The number of refugees who have arrived in Sudan over the last couple weeks stood at 36,000 on Wednesday, according to Sudanese authorities.

"It is a huge logistical challenge to bring all the necessary equipment to build the camps," Babacar Cisse, UN resident coordinator in Khartoum, told journalists on a conference call following a two-day assessment mission in the border region.

"It is a very great challenge in terms of material, equipment, especially sanitation. These are areas that are out of the way, isolated."

"But we need other camps, and that is the challenge. We have insisted on the authorities to give us areas allowing us to prepare them," he said.

Asked how it is possible to accommodate the refugees when the camps are not built, the UN official said it was a problem.

Sudanese authorities, Cisse said, were not in favor of transforming the first transit camp established at the border into a refugee camp as proposed by the UN, deeming it too close to Ethiopia.

In another area where around 5,000 refugees are gathered, shelters are being built, he said.

There were efforts "to strengthen the water supply in the camp, and we were able to provide some electricity," Cisse said.

"We are making enormous efforts in the areas of health, water, drinking water and sanitation with the help of various partners."

The Nobel Peace Prize-winning Ahmed said it was in response to attacks on federal military camps by the Tigray People's Liberation Front (TPLF).