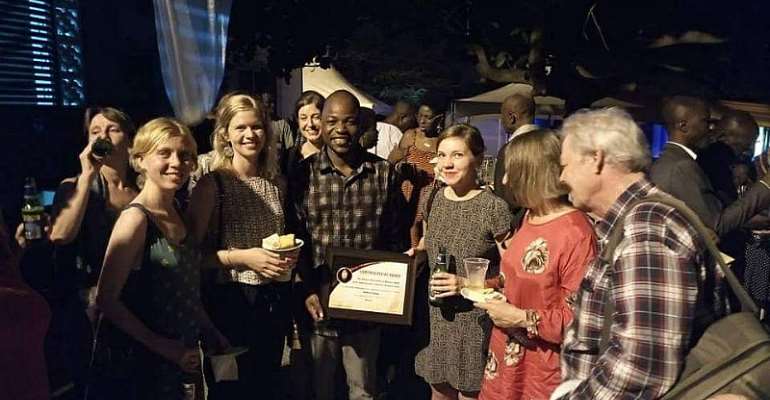 I will start by quoting the father of American literature who said…“It is better to deserve honours and not have them than to have them and not deserve them.” I have never forgotten this Mark Twain’s quotation ever since I read it.

I have personally bagged some awards and I know how the feeling is when one is awarded or honoured for the good they have done for society. I won my first Literary Award in 2017, it was the Efo Kodjo Mawugbe's Prize in Drama, awarded by the Ghana Association of Writers (GAW). The feeling I had was so great because to have a jury made up of English Professors endorsing your book is something great to be happy about.

Actually, there is nothing wrong if one wants or likes awards or accolades provided they are working hard for them and the important thing is that the person being awarded or honoured has impacted lives enough or is fighting a great cause in favour of humanity.

Honours are good. If people are given recognition for their good works in society, I don’t think that there is anything wrong with it, because it will make them do more and even inspire other people or the younger ones to even do better. I am a big fan of the Nobel Prize which was created by Alfred Nobel to honour people who have done great works in the areas of peace, literature, medicine, chemistry and physics and in 1968, Sveriges Riksbank (Sweden’s central bank) established The Sveriges Riksbank Prize in Economic Sciences in Memory of Alfred Nobel.

Why am I a big fan of this Prize? I think I like it because it is a prize to support the good works or talents of people who endeavour to change the world or make it a better place for us all. For instance, the whole world is currently battling the Covid-19 pandemic and we have people who are currently in the laboratories working very hard to find a vaccine or a cure for this strange virus; if they eventually find a vaccine or a cure, it will save the world, hence making them deserving of any awards or honours in the world, including the Nobel Prize.

And apart from the medal and diploma, an amount of almost one million dollars ($1000000.00) is given to the awardee. This is what makes it very prestigious because that amount is life-changing and can help the recipient achieve more or do more for humanity. It will also make many other people aspire for higher heights or do great things which will be of great help to humanity.

In my opinion, any award scheme or institution that does not give a real prize to awardees is almost bogus because it defeats the very purpose of the award. What is the point if all I am getting is just a mere plaque or some citation?

I should feel very proud about any honours given to me for my hard work or achievements and I can only be very proud if there is something valuable attached to the award or recognition. But unfortunately, in Ghana, most of the institutions that give awards attach almost nothing valuable to the award. Just some mere plaques or citation and that is it.

It makes mockery of the award and the awardee because the award is really adding nothing valuable to the person's life. In that case, it is better not to award at all. It is not by force to award people who have done great works for humanity if you cannot add a real prize to it.

What is even more embarrassing now is that many award institutions or people who give out awards in Ghana want to use it to make money and this is obvious, because they ask the potential awardees to pay money to help them organise the award event. This does not make any sense to me;

you are awarding me for something great I have done, why should I pay you or support you to organise the event? Did I ask you to award me? If you do not have enough resources or sponsors to organise an award event, do not even start it, because it will make no real impact in the end.

Awards in Ghana are gradually losing their value. A time will come and no enlightened person will respect the awards given to hard-working Ghanaians, because the process used to give out awards to people is mostly loose. It seems anyone with any mediocre achievement can award or receive an award.

That brings me to the fake "2020 Global Leadership Service To Humanity Award" also called the "United Nations Kofi Annan Excellence Awards" doled out to some Ghanaian celebrities and academics on 28th August 2020, in Accra, held at the Alisa hotel. It is very unfortunate that learned men like the Vice-Chancellor of the University of Ghana, Prof. Ebenezer Oduro Owusu fell for this scam.

It is even more surprising that some popular musicians and journalists who are known for their exposure or due diligence also fell for this fake honour. It is a lesson to us all that due diligence is always necessary in all that we do, if not, we will still suffer such humiliations or shame in the future.

I will end here by saying that all the award institutions in Ghana or people who genuinely want to inspire achievers by giving them awards should attach a real value or prize to their award schemes and make the process of getting an award more stringent like many prestigious awards like the Nobel Prize, Grammys or Academy awards do.

If they cannot get well-established sponsors who will be willing to support them with the awards, then it is better they stop.

Nobody will look down on an award scheme if it is truly prestigious and comes with something very valuable. It is not a must to recognise hard-working people if you do not have what it takes to do that. Do not just award. Let the award have value…