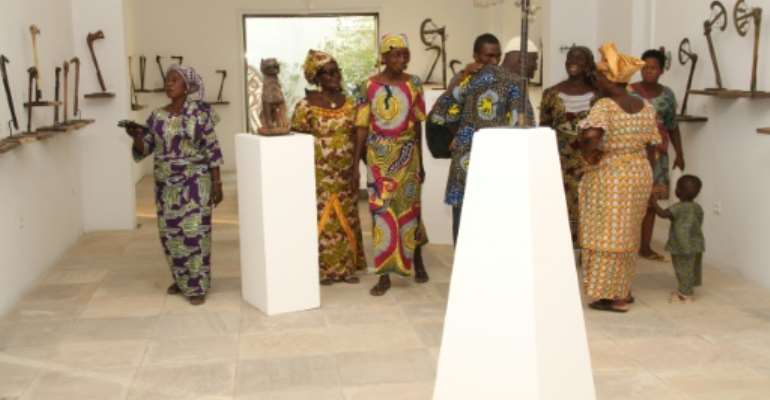 Artefacts looted from Benin by Europeans in the 19th century are slowly returning to the west African nation. By Prosper Dagnitche (AFP)

A vote by French lawmakers to return 26 prized artefacts looted in Benin in the 19th century is a "big victory", Alain Godonou, the West African country's director of museums, said on Wednesday.

The head of the Museums Programme at the National Agency for Heritage Promotion and Tourism Development told AFP the country will prepare to receive the objects "within a year".

How has Benin welcomed the result of this unanimous vote by France's MPs?

"This vote (that took place on Tuesday) represents a big victory for international cooperation. We have been heard and understood."

When will the restitution take place?

"The French know what our objectives and timelines are, and we know theirs. We have agreed.

"We will be receiving these artefacts within a year, because there is still a whole process to get through.

"We also have technical aspects to review. It's normal that we prepare, that we make sure that the conditions are in place for things to happen smoothly.

"To start with, the objects will be heading to the museum near the French fort in Ouidah. Eventually, they will be displayed at a new museum in Abomey, once capital of the Kingdom of Dahomey (the former name of Benin)."

Are you building a museum specifically for these historic artefacts?

"It was necessary to put in place certain infrastructures to be able to have the objects returned."

(The 26 items from the so-called 'Treasure of Behanzin', looted during the 1892 pillaging of the palace of Abomey in Dahomey, are currently at the Quai Branly museum in Paris).

"This is not the first episode of reclamation-restitution of artefacts in Africa.

"Belgium returned objects to president Mobutu of Zaire (now the Democratic Republic of Congo) who had made a similar request to the one (Benin) president Patrice Talon made.

"But the objects returned to Zaire disappeared on the black market because the country wasn't ready for them, they didn't have the infrastructure or the framework in place.

"We don't want that for Benin -- we don't want objects to be returned to a location that isn't secured, that isn't properly guarded, where they could be stolen by criminals who would disappear with them into thin air. It's a responsibility that the country accepts.

"The state of our museums was preoccupying and the government is investing massively, to a level never seen before in our country's history.

"We would like to reach a point where we are considered internationally as one of the countries 'that counts' on these questions. After these artefacts are returned, we will be able to host all sorts of collections and exhibitions, including international ones."