Does NDC Have A Plan To End DoubleTrack System? 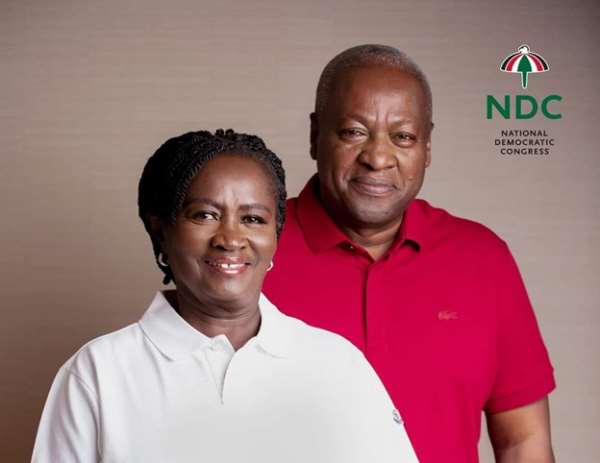 The 'Saints' are back! They're back with their sweet-talks. Be reminded, they aren't from Mars or Jupiter. They're the same people you've known from Adam. They'll tell you they've answers to all your problems and worries. BUT don't be fooled, the value hasn't changed.

First of all, I will like to remind Ghanaians that not long ago on the watch of the John Mahama NDC--administration their beloved country--Ghana ended up at the Intensive Care Unit (ICU).

Why? The administration couldn't figure out how to fix some major problems that had confronted the nation at the time. They included the economy, energy, agriculture, galamsey, inflation to mention but a few.

Was it not NDC that once said Free SHS was bound to fail because the programme didn't get a perfect start?

Indeed, there's no such thing as perfect, no matter how hard you try. Today, see how many of our children are in school. Had it not been the double-track system thousands of them would have stayed home or left behind. Is this a bad system?

Obviously, this is better than hurling insults at opponents or throwing temper tantrums.

So I give credit to the questioner. Too often our political landscape gets saturated with incendiary remarks especially during electioneering campaign season. Instead of focusing on issues or challenges that confront the nation and finding pro growth policies to solving them the players waste time on fighting, pandering backstabbing and nickpicking .

And who's the questioner?
Dr. Clement Apaak the Member of Parliament for Builsa South, has taken President Akufo-Addo on.

He wants timeline isn't it?
Dr. Apaakr. says the National Democratic Congress NDC flagbearer former President John Mahama already has a plan in place, which is why he's throwing the challenge to the President.

The former President, has announced he will, within one year in office, eliminate the double-track system that has plagued the smooth implementation of the free SHS Programme.

How would he do it?
Mr. Mahama said his government will embark on a fast-track programme to complete the abandoned Community Day Schools, expand infrastructure in existing schools, and include private schools in the free SHS programme.

He announced his plans at a community durbar of chiefs and farmers at Fawohoyeden in the Asunafo North district of the Ahafo Region, Mr. Mahama said he has always stood for quality free SHS.

According to him, claims that he would cancel the free SHS programme is false, noting that he started the programme with day students during his administration.

While acknowledging that Ghana during the NDC era was not heaven, President Mahama maintained that the NDC has a better record than the NPP, explaining that today, everyone is suffering and can hardly make ends meet.

Did he really mean everyone is suffering including Him? That's ridiculous. Mr. Mahama is not suffering.

It is true that, the average Ghanaian is tightening his or her belt. But on the whole, the cost living today is better than as it was under the Mahama administration. What's the better record when more than 70,000 students have had the opportunity to be in the classrooms? Remember they had no such avenue.

Also, Mr. Mahama went on to say this:
“These days nothing works. Whether as a farmer, trader, driver or mechanic, the hardship is unbearable everywhere,” he bemoaned, adding “we have to go back for the NDC and I know that by God’s grace, we shall be victorious.”

That's false. Have the NDC forgotten there once was a monster called 'Dumsor? And do you really want to know the days nothing worked? Those were the days of John the 4th. Businesses went out of administration. Factories, shops, stores, were closed.

The nation reeled in pit darkness. Coal pots and box irons were reinstated. And coldstores no power to preserve their perishable products. It all happened on and under Mr. Mahama's watch.

He further outlined a number of policies contained in the NDC 2020 People’s Manifesto, including the Free Primary Health Care Plan, Free Technical and Vocational Education and Training (TVET) and the Free Apprenticeship Programme.

Doing the bidding for his party flagbearer, Dr. Apaak pointed out that Mr. Akufo-Addo has no superior solution to the problem as compared to the solutions Mr. Mahama have.

“For the avoidance of doubt, President Akufo-Addo, who introduced the dreaded and obnoxious double tract system, because he failed to anticipate the need for infrastructure, has provided no timelines nor clear plan on how to end it.

John Dramani Mahama, the flagbearer of the NDC, reiterated his commitment to end the obnoxious double-track system in one year during his address at a community durbar of chiefs and farmers at Fawohoyeden, in the Asunafo North district of the Ahafo Region, on Friday October 1st, 2020.

John Mahama was resolute, emphatic, as he states, “I will, within one year in office, eliminate the double-track system that has plagued the smooth implementation of the free SHS Programme”.

No doubt, this continues to be reassuring, welcome, and refreshing news to stakeholders in education; students, teachers, parents, think-tanks, since Akufo-Addo has failed to give a timelines on when the hated double-track system he introduced will end.

The excitement to see the demise of the double-track system with alacrity is because of how negatively it’s affecting teaching and learning as exemplified in the following:

a) A Semester Programme that allows Students to go on long vacations after spending a few weeks in school;

b) A hahpazard calendar, where sometimes the reopening date for one track is hurriedly postponed to the disadvantage of plans put in place by parents and their wards;

c) Enormous pressure on non-teaching staff, especially Kitchen staff, and Administrative staff, Headmasters, Senior Housemasters and Housemasters, who hardly go on any vacation, among others;

d) A centralised and corrupted system where party people are given contracts to supply food items without the knowledge and input of school management, resulting in the dumping of unwholesome food items and huge quantities of particular food items on schools;

e) A culture of silence, where heads and senior management of schools are intimated, penalised by transfers, and or demotions for speaking to the challenges they face as a result of the poor implementation of the free SHS programme;

f) Refusal to allow students to have access to books from previous years; year three students have no access to their year one and two textbooks, yet need all those books to prepare for exams;

To bring this anomaly or deviance called double-track system to an end, the NDC Flagbearer has provided an emphatic and definite timeline; one year, to end the double-track given the opportunity as President of Ghana.

Your insatiable taste to travel in another luxurious jet to ...
31 minutes ago

Ghana’s 3.9% economic recovery is sluggish; Ghanaians must w...
33 minutes ago