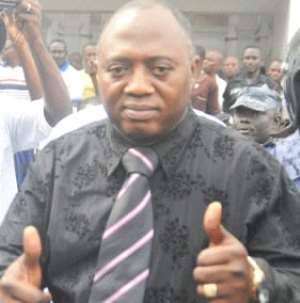 The Council of Elders, The Executive Committee, and the entire membership of NPP UK Branch are mourning the sudden demise of a gallant foundation member of NPP UK, the Hon. Adamu Dramani Sakande, former MP of Bawku Central (2009 -2012)

Undeniably, this sudden death of Hon. Adamu, a kingsman from Bawku is associated with the health complications resulting from being wrongfully incarcerated in 2012 on the charge of not being 'Ghanaian' albeit fully blooded Ghanaian and a Royal of Bawku.

The late Hon. Adamu was a consummate Democrat and a dye-in-the wool member of the Danquah, Dombo Busia tradition. His dedication to democracy and commitment for multiparty democracy can be traced from his youth as a student activist, fighting the PNDC dictatorship and, while he sought for freedom from persecution in UK, remained an active participant in several pro-democracy demonstrations in London even before the birth of Ghana’s fourth republic in 1992. Hon Adamu was a foundation member of the NPP UK branch when it was formed and later was elected Vice Chairman of the Branch.

True to his unquenchable dedication to contribute to building his country, Hon Adamu left his loving family, good job, and genuine friends in London for Ghana to engage in active politics and successfully represented his constituency.

Hon. Adamu is remembered as the first NPP candidate to be elected Member of Parliament for Bawku Central for the fifth parliament of the Fourth Republic in 2009 -2012

Needless to to say, his only crime was that, in the quest to fight for the freedom of Ghana, Hon. Adamu became a dual citizen. Undoubtedly, he religiously remained a Ghanaian and accordingly relinquished his dual citizenship to take up the office as member of Parliament. However, the acrimonious nature of our current political dispensation meant he would be entrapped and betrayed and accused of not being a Ghanaian. Yes, they succeeded, albeit with technicalities, in Bielbiel Vrs. Daramani and Another (J1/2/2010) [2011] GHASC 24 (26 October 2011).

Hon. Adamu, a true patriot, tirelessly served his party and paid the highest political price of incarceration and, now the ultimate price, death.

Andrew Adamu Dramani Sakande's death is sudden and untimely - the very reason we, as a Branch Party, have to unite and fight for victory for the party December 2020 and to ensure that, the NPP government under His Excellency, Nana Addo Dankwa Akufo-Addo, President of the Republic, 2021-2024, will work on and bring the issue of dual nationals' participation in Ghana politics to its logical conclusion.

Hon. Adamu fought for the party. He followed his convictions and dedicated himself to the party and country at the peril of his life.

Although we recognise that words cannot redeem the pain of this colossal loss, the NPP UK membership wish to express our heartfelt condolences to his wife, Eva, and the children, Kathryn and Wannah.

Damirifa due Adamu, and may the almighty, ever-merciful Allah receive you into his bosom in perfect peace.