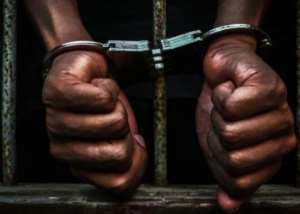 A police reinforcement team from the Formed Police Unit in Accra has arrested four more persons suspected to have been part of the disturbances recorded in parts of the Volta Region on Friday, September 25.

The four were arrested in an ongoing operation in the area after the Aveyime and Mepe Police stations were attacked and officers on duty tortured by individuals believed to be members of the secessionist group, Homeland Study Group Foundation.

The group is seeking the creation of a new country called Western Togoland.

The attack which appeared to have been well thought through and coordinated led to the stealing of some guns belonging to the Police and a police car which has since been abandoned in a Bush in the Volta Region.

Meanwhile, the police are assuring that they will do all in their power to bring the perpetrators to book.

According to the Police, 14 AK-47 rifles and five pump-action guns were stolen by the rebellious group after they attacked the Aveyime Police Station, freeing cell inmates and locking up officers on duty at the time.

A similar attack was executed on the Mepe Police station with a number of guns stolen.

The group also attacked the North Tongu District Assembly and made away with a Toyota Hilux pick up vehicle belonging to the Assembly after they took the official Toyota Landcruiser pickup belonging to the Tongu Divisional Commander of Police, Dennis Fiakpui.

The police are also combing through the North Tongu District in search of the remaining 13 AK-47 riffles and the five pump-action guns that are still in the hands of the rebellious group after the attack on the Aveyime Police Station.

Leader of the police troupe from the Form Police Unit, DSP Johnson Bediako told Citi News his men will leave no stone unturned in ensuring that peace returns to the area.

“The situation is under control and the situation is calm in the area. Since the attack on the police and the District Assembly, there hasn't been any further attack on any facility since we came in. We have managed to stabilize security so far in the area. We have managed to pick about four people for interrogation based on the intelligence we gathered. But the community should be assured of stability because the police are in the area and there are no fears”, he said.

Member of Parliament for North Tongu, Samuel Okudzeto Ablakwa who was also touring affected areas in the North Tongu Constituency called for an intensive investigation into last Friday’s happenings which he said has the tendency of affecting the entire sub-region.

“This is beginning to metamorphose into something else which can destabilize not only the Volta Region but the whole country. Our national security which has the constitutional mandate and the President must speak up on this matter.”

Mr. Ablakwa also made a passionate appeal to his constituents to endeavour not to be indoctrinated by people whose sole intention is to destroy the peace Ghana is currently enjoying.

“Don’t fall for what they are telling you. The true history of this whole Western Togoland agenda; the entire area of Tongu and Anlo are not part of it and so when they involve themselves in it, it is a very high crime they are committing."