Opinion: Curbing The Scourge Of Fake News; Journalists Must Be At The Forefront 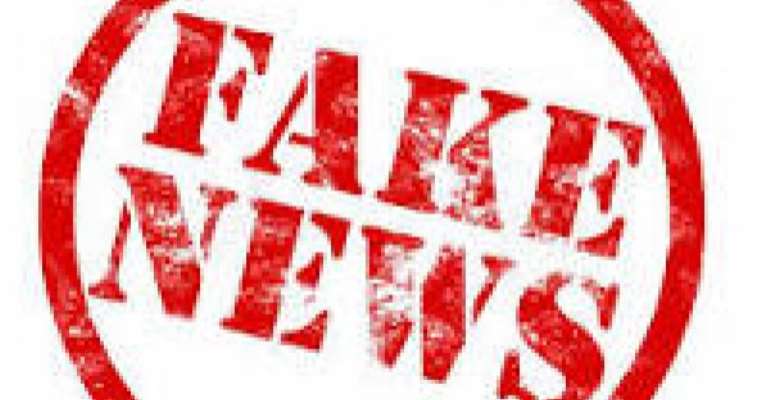 Afedzi Abdullah of the Ghana News Agency examines the era of digital news with this piece.

The provision of Information in the era of the Information Age is crucial, but its dissemination comes with a huge task as more people crave for the ever increasing information on all platforms and mediums.

The task has become daunting for journalists because of the phenomenon of fake news, misinformation, hoaxes and disinformation which are significantly on the ascendancy.

This avails a key challenge to media practice, thus making it more imperative for journalists to be concerned in clamping down on it for patrons of authentic news to have the confidence that there is light at the end of the tunnel.

Fake news, which knows no boundaries has become part and parcel of the news ecosystem and gradually gaining grounds in Ghana, particularly in the political sphere, where politicians use it as a tool to discrete opponents just in the name of securing power.

A study by Penplusbytes on the Media perspective on fake news in Ghana in 2018 revealed that the phenomenon is a growing problem in Ghana and however, concluded that the Ghanaian media landscape does not have systems, budget and trained personnel dedicated to combat the menace.

Another study that looked at Mobile journalism and the thriving culture of fake news in Pakistan and Ghana established that there is an increase in fake news culture from citizen journalism that is misinforming the media audience in Ghana.

According to a news publication on a Ghanaian online portal on January 19, 2019, Ghana's Information Minister, Mr Kojo Oppong Nkrumah lamented the increasing spate of fake news describing it as a threat to journalism and called for urgent steps to check the circulation of fake news in the country.

A case in point is the numerous misinformation on the COVID-19 pandemic, where the right information needed by the public to be safe is being distorted through the dissemination of fake news.

Ever since Ghana recorded its first case of COVID-19 in March this year, several false messages have come out mainly through social media.

Digital technologies, social media and the spread of fake news

The findings from Penplusbytes study reinforced the challenges of many newsrooms in news production as more and more digital technologies emerge in addition to social media platforms such as Whatsapp, Facebook, Twitter, Instagram and others.

Social media has been identified as a major conduit for the spread of fake news in Ghana.

According to a recent Afro-barometer survey conducted from September to October 2019, social media is increasingly becoming a common source of news for many Ghanaians.

With the upsurge of social media, the core watchdog role of the traditional media in curbing misinformation and ensuring authentic content for public consumption, is now under siege.

This is simply because social media contents are not constrained by editorial decisions. People simply post whatever they feel like without any limitation.

In his article, the Science of fake news, Jason Socrates Bardi, a former News Director of the American Institute of Physics and a longtime science writer stressed the increased ubiquitousness of social media and online access.

Also, Mr Dapo Olorunyomi, a publisher with Premium Time says the pervasive skepticism against journalistic truth in complementary journalism practice must be a great source of worry for every journalist.

This, he lamented, was because the extent of fake news has left many people confused as they can no longer decipher “the truth out there because there is doubt about what truth really is”.

Mr Olorunyomi noted that in their haste to break the news, some journalists disseminate inaccurate information and bemoaned that practice.

To him, good journalism does not entertain unverified stories or statistics without cross checking, adding that integrity must drive credibility.

Journalism, he said is rooted in four core elements of truth and accuracy, verification, independent and accountability with the goal of public good and underscored the need for media practitioners to verify information before publishing.

By assessing evidence in a story to ensure reliability, we are able to achieve journalistic truth that strengthens the position of our readers, Mr Olorunyomi stated and emphasised that journalism truth is always provisional and never absolute, which helps readers to make pragmatic sense of their World.

Caroline Anipah, an editor with Dubawa Ghana also expressed the fear that journalists risk being manipulated by actors to mislead or be corrupted into spreading disinformation if they did nothing to address the information disorder ecosystem.

Journalists can find themselves becoming a target of lies, rumours and hoaxes designed to intimidate and discredit them and their work, especially when they expose those who are commissioning or spreading disinformation, she said.

The time for journalists to act is now

Information is such that once collected, processed and published, it is impossible to correct and polish it entirely, if it is fake. This is mainly because the audience or consumers of information are constantly on the move digesting other content and may not have the time or interest to follow up an old one.

The public may not know the difference between the truth and rumour and the job of the journalist as gatekeepers if not stepped up, will be meaningless and create chaotic scenes in society.

Putting credible stories out there must be of great importance to all news outlets especially in this COVID-19 period, where Fake news is spreading faster than the virus and resulting in the death of some people who downplayed the virus and all safety protocols or are self-medicating, says Jonathan Donkor, a journalist with the Ghanaian Times.

According to Jonathan, it is imperative for journalists to position themselves as the source that the public can trust and help draw deeper the thin line between truth and untruth from being blurred.

Indeed, the repercussions of fake news are grave and chaotic for public health, safety and life in general, since people make decisions based on information available to them, he added

Despite the advent of numerous blogging sites and social media platforms, people still rely on the mainstream media to validate news stories.

“Anytime I read any news on social media, or on any of the blogging websites, I try to compare it with the one in the mainstream media to be convinced if it's true”, Isaac Arkoh, a journalist with the GNA in Cape Coast stated.

Arkoh's confession indicates that all hope is not lost and that journalists in the mainstream media have the responsibility to rise up to the task to save their own profession from collapse through countering the menace of fake news.

The onus therefore is on the professionals, whose duty include informing and educating the public with credible information.

Part of the cross Journalists carry is to crosscheck not only to check if their Ts' are crossed or 'I' dotted but if their stories are not fake.

Fake news continues to be a growing concern which is gradually creeping deep into the fiber of the mainstream media.

Government and other stakeholders are being called upon to put in place measures to deal with the menace. Journalists must admit that the continuous existence of fake news threaten the tenets of journalism and ultimately the journalism profession.

For this reason, they must be the ones to be more concern and the ones to be at the forefront to combat the scourge of fake news to save the image of the profession.