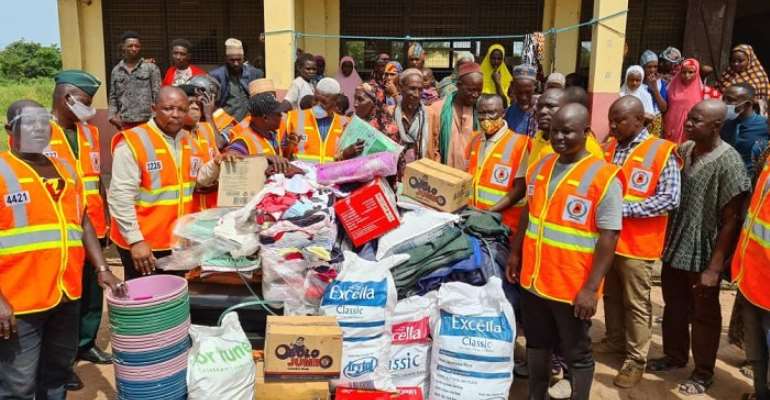 Some victims of the Bagre Dam spillage and flood disaster in the Daboya-Mankarigu district of the Savannah Region, have been assured of the government's support.

This follows a visit to some of the communities by the Savannah Regional Minister, Salifu Adam Braimah.

The spillage of the Bagre dam affected about nine communities in the Daboya-Mankarigu district with over 750 households displaced.

The minister assured the affected residents that they will not be abandoned. He presented some relief items personally from him to them to mitigate their suffering.

Mr. Braimah lamented about the effects of the floods on developmental projects ongoing in the district specially road construction which is a major problem to the people of Daboya-Mankarigu.

“ One of the critical roads we are constructing has been covered by the water so the engineers have more work to do .”

He was however of the view that the completion of the Pwalugu multipurpose dam will go a long way to resolve the flooding issues of the Bagre dam.

The minister appealed to residents living close to the river to move to avoid any future disaster.

The Savannah Regional Director of the National Dissaster Management Organisation (NADMO),Mr. Mohammed Tahiru said most of the affected victims have been provided with shelter at the Wasipe Senior High School while others have joined their relatives at their homes.

According to him, NADMO has provided an alternative route from Daboya to Busunu to Damongo or Tamale adding that residents have been cautioned not to cross the water to nearby communities.

“ So from today we have advised that nobody should cross the otherside to join a bus to Tamale bias's it's very risky even though we have some live-jackets they are not enough .”

He said they are continuing to tour to the hard to reach communities in the district to ascertain the level of devastation.

Mr. Tahiru said they will forward their report to the national level for some relief items to support the victims.

He also called on organizations, institutions, and individuals to come to the aid of residents in the Daboya-Mankarigu district.

The heavy downpour and resultant floods in addition to the spillage of the Bagre dam have destroyed farmlands and displaced hundreds of residents in the Northern regions.

Communities have been cut off due to blockage of roads which link them from the various districts to the regional capitals in the Northern regions.

So far, six persons have been confirmed dead in the North East Region.

The spillage of the Bagre dam was caused by the 81 per cent increment in the water level.