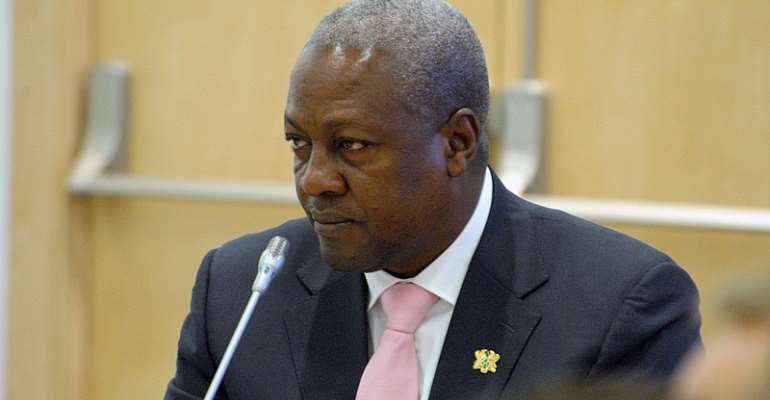 Last week, a handful of NPP supporters went on the street demanding an apology from our Flagbearer, H.E. John Mahama. The reason was that H.E. John Mahama had shared on his Facebook wall a post inscription “Akyem Sakawa Boys”. We condemn the organisers of this unpopular and unnecessary demonstration, and we ask the good people of Ghana to condemn this demonstration in no uncertain terms it deserves. We would like to state emphatically clear that, the leader of the largest opposition party, who Ghanaians will give him another mandate to return to power on 7 December 2020, has done nothing untoward. We believe that these shenanigans are cowardice attempts by the NPP government and his hirelings to frustrate Ghanaian voters to make an informed decision to vote. We believe such hullabaloo is an attempt to cover up the abysmal performance of NPP government under President Nana Akufo-Addo. As the saying goes “se wontumi w'adesoa a, wo se, wo kahyire nnye”

We would like to state that, H.E. John Dramani Mahama has never said or indicated anywhere that the good people of Akyem is fraudsters. NDC boasts of numerous people from Akyem who have worked and continue to work in various positions within the party. Unlike other parties, everyone has the chance of progression should they join NDC. We are not like those whose upper echelons run it as a tribal clique. Unfortunately, those referred to as “Akyem Sakawa Boys” are a few greedy people surrounding around President Akufo-Addo. An apology is rendered when one has done something that has major negative consequences for someone else. But as far as we are concerned, our Flagbearer has not done anything that brings his credibility to disrupt between him and the good people of Akyem. The Former President is a man of integrity and has never beaten war drums in his political career. Therefore, it is unfair and disingenuous for NPP to hide behind a few people to taint his records. It is rather President Akufo-Addo who has to render apologies to Ghanaians for his lies and deceits

Ghana is a Nation, not a George Orwell’s Animal Farm. Ghana cannot be George Orwell's fairy tale description in Animal Farm, where "All animals are equal, but some animals are more equal than others". Orwell’s quip is viewed widely as an allegorical critique of a failed system supposedly set up in an egalitarian ideal of communism. The Orwell's witticism cannot be accepted in any modern political system, such as our current political dispensation. Ghanaians are tired of President Akufo-Addo oligarchy and kleptocracy type of government. We cannot allow Ghana, the first African independent country, to operate a system like Sudan where racism is insidious. In Sudan, most senior positions are filled by people from the north - the Arab (coloured) and Nubian ethnic groups, while the black Africans are regarded as a slave. President Akufo-Addo has inherited the UP tradition, who is since independence has manoeuvred to scheme up tribalism and nepotism in Ghana.

When seeking Ghanaians mandate, President Akufo-Addo promised to make Ghana a paradise for all. At the Jubilee Park in Tamale on 22 November 2016, he said “I am promising you that within 18 months of a new government of the NPP, under my leadership, the face of our country, Ghana, is going to change”. Then he added, “This ‘new Ghana will be a Ghana with opportunities for all, and where everybody is taken care off”. Assuming office, he appointed only families and favourite friends to juicy positions. At least 51 family members are now holding key positions. He engaged his nucleus families and friends, mostly from the Akyem caucus, to loot the state by creating unconventional companies to engage in dubious and fraudulent businesses at the detriment of the state. We know of PDS, who has still not accounted for over Ghc1 billion collected on behalf of ECG and yet, no one has been prosecuted. We read about Agyapa Royalties; a private offshore company created to handle our mineral royalties when there are other local companies to do so. We have seen family-friends’ companies engaged to scheme up the plan, and gave themselves managerial positions. Has the Former President and the Leader of the largest opposition party not gotten the right to question the legality of these nefarious activities, such as Agyapa Royalties? Why is it a problem to mention “Akyem Sakawa Boys” if indeed proven that the same people are behind the deal? And what makes the President angry to quickly summon the clergies to lodge a complaint?

President Akufo-Addo was part of Prof. Albert Adu-Boahen NPP campaign slogan “Ye gye ye man” in 1992. Nana Akufo-Addo has classified his NPP as “Yen Akanfo” which he meant NPP is Akan party. On 13 April 2012, the acerbic-tongue NPP MP for Assin North, Mr Kennedy Agyapong, declared war on the Ewes and Gas in Ashanti Region. Then Mr. Yaw Osafo Marfo made an ethnocentric statement which echoed NPP tribalistic sentiment that “even though close to 90% of Ghana's resources are concentrated in Akan-dominated areas, it is non-Akan who come from areas without resources that are at the helm of governance”. Then on 20 February 2020, Mrs. Ursula Owusu-Ekuful, the Minister of Communication, went on Asempa FM to say that the NDC MPs have lost their senses for staging a walk-out in Parliament during President Akufo-Addo’s State of the Nation’s Address. The Minister also said they the Akyems own the country which can be referenced to an old saying by some NPP kingpins “Ye gye ye man”. If President Nana Akufo-Addo and his NPP are clinically clean devoid of any tribalism, he would have condemned Mr. Yaw Osafo Marfo, Mrs Ursula Owusu-Ekuful and Mr Kennedy Ohene Agyapong. President Nana Akufo-Addo has for the past made statements which were not only derogatory, tribalistic and divisive but also incendiary, such as “all-die-be-die”. Today, he sees the wisdom to complain about his opponent?

NDC Holland challenges NPP supporters’ home and abroad, that they have no moral right to dictate to H.E John Dramani Mahama what to do and what ought not to do. H.E. John Dramani Mahama, the former first gentleman of the Nation, has the constitutional duty to say anything so far as it is in the interest of the majority of Ghanaians. H.E. John Dramani Mahama is not a tribalist and he dislikes tribalism. It is unequivocal that the demonstration against H.E. John Mahama was needless and senseless. The government who created “Akyem Sakawa Boys” is to be blamed. They are “Sakawa Boys” because they are always behind any fraudulent deals at the expense of the state, and we will not stop referring to them. Ghana is a peaceful and democratic country and we would not be kowtowed by fears and intimidation.

On 7 September 2020 H.E. John Dramani Mahama and Prof. Jane Naana Opoku-Agyamang launched the NDC PEOPLE’S MANIFESTO. Even though we are not yet governing, our manifesto has started to work in Ghana. Ghanaians are ready to see President Nana Akufo-Addo and H.E. John Dramani Mahama debate on policies and on records of economic development that will move Ghana forward. We challenge the President Akufo-Addo for debate instead of inciting his people to go on unnecessary demonstration. We also challenge Dr. Mahamudu Bawumia to debate with Prof. Jane Naana Opoku-Agyemang instead of preaching tribalism in the north to score political points.

God Bless Our Homeland; And Help Us to Resist Oppressors’ Rule

'Get rich quick' attitude among the youth eroding moral fabr...
56 minutes ago