Making Bicycle A Safe Means Of Transport In Ghana 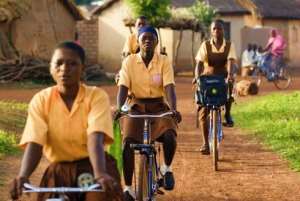 The Oxford dictionary defines ‘vehicle’ as a conveyance for transporting passengers or goods on land or in space. In this case besides car, lorry, train, airplane, a bicycle is also accepted as a means of transport to apply on the road.

That means a cyclist has the right to use the road without any horn hooting or harassment of the rider by other road users. Integrated transport policy is not viable without the implementation of structures, allowing the development of cycling.

There are many reasons the bicycle is essential and important to users. The bicycle enables one to get to somewhere very fast when there is traffic hold up. It is energizing to use a bicycle and it eliminates stress.

Among all transports, it the cheapest, as you don’t need fuel and no license required. Ecologically, the manufacturing and use of a bicycle, as well as the planning of space for its use create much less solid waste and no pollution.

In Ghana, bicycle plays a major role as a means of transport in the North for farmers who have no other means of getting to their farms and home. But at the moment, Bicycle is fast emerging as an urban means of transport.

Transportation is a problem in most big cities. It is therefore not a crime for a cyclist to get to work or where ever he intends to go on a bicycle.

But on the road, some road users think the cyclist has no right at all to be on the street. They torment cyclists with the blaring of horns and even scream at them at times.

Actually, it is very frustrating to most drivers when a cyclist is ahead of them or at any inconvenience place along the road. Because bicycles can cause traffic on a busy road.

Some cyclists have contributed to road accidents, many times. But that doesn’t mean that they have no right to use the road after all motorists also involve in road accidents.

Walking through the city of Accra, there is nowhere one could find a bicycle route by the side of the major roads. For example, the Accra – Kasoa road is a very good level constructed road, but it was constructed without any bicycle lane.

In Europe, a circulation plan aiming to develop cycling was approved in the ’80s. Revised annually, it considers the implementation of a network of cycle lanes and the transformation of parking places into bicycle parking.

This network is built in order to reinforce the safety of cyclists, with stop signposts placed before those for cars and crossroads redesigned for cyclists.

In Ghana, roads are constructed without any consideration for bicycle users. Nothing is planned in the country by taking the future into consideration.

I believe that if the government will implement the construction of bicycle routes in its future projects, there will be a free flow of traffic in the cities, and that would also help to reduce the traffic holdups that motorists are currently facing.

It’s a well-known fact that lack of finance is one of the major setbacks affecting Africa’s infrastructure and projects. But if a specific project would be a solution or an answer to a problem, then the government should take it into consideration.

For example, in Europe, to prevent traffic jams and ensure the safety of cyclists, Holland has been successful with bicycle routes running throughout the town and cities. A journey of about 50 to 100 km, could easily be done by a bicycle.

In Trondheim-Norway, a bicycle lift has been put up in the center of the town to facilitate access to another town called Brubakken and in Belgium, a bicycle tunnel has been built under the sea to link the two cities of Antwerp and Linkeroever.

It takes ten to twelve minutes to go to Linkeroever from the city of Antwerp while the bus takes about twenty minutes.

As Ghana gradually matures into a great nation, the government must include the construction of bicycle routes in its future road projects. Bicycle plays a very significant role, not only as a means of transport but also promotes good health.

The Controversy Surrounding The Okada Transport In Ghana


The biggest problem or topic unfolding in Ghana at the moment is the banning or legalizing of ‘Okada’ motorcycle as a means of transportation in Ghana.

The current Ghanaian leader, Nana Akufo Addo has taken the public safety issue into consideration since the motorcycle means of transport is claiming lives at a very fast rate in the country.

However, there are many issues the Ghanaian president has to consider to find solutions to reduce road accidents in the country, instead of banning the Okada means of transport.

Many people are unemployed because there are no easy accessible jobs in the country; therefore, those engaged in the Okada sector are depending on it to feed themselves and their families.

At the same time, their engagement with the Okada transport can reduce crime in the country, since “the devil always has work for idle hands.” In my opinion, I wish Nana Akufo will bring strong safety measures for the riders to reduce the deaths on our roads.

And finally, those who refuse to obey the rules or the traffic regulations must be heavily fined, this will bring discipline and safety in the country.

More Feature Article
ModernGhana Links
Many people enjoy being feared, If you are one of them, I will not give you that happiness
Highlights Of Where Religion, Charlatans, And Some Christians Are Going Wrong (HADES)
Fixing The Country: Thank You Letter To Modern Ghana And Multimedia And National Matters On Fixing The Country - Part 4
Latest advancements in TB science in spotlight
A nation goes hungry when politics ignores basic principles
The Great Teal Tsunami: Arise Australia’s Independents
You are not qualified to rule Ghana if you cannot understand that water is life
Dr Kwabena Duffour has my backing to win the NDC flagbearer position
Not a Ghanaian ISIS Member Really
TOP STORIES