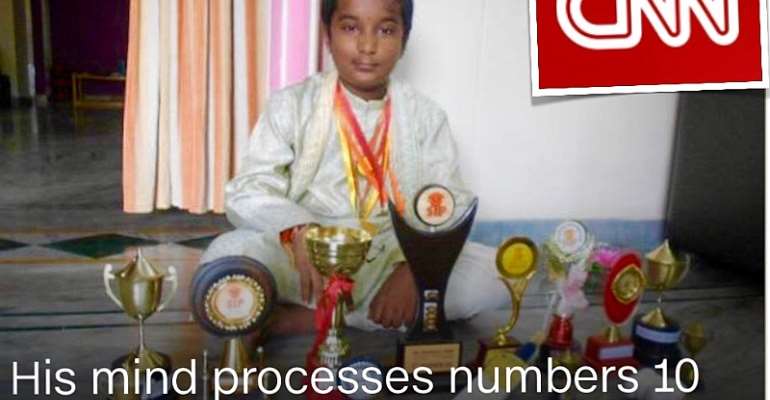 (Still on the indomitability of education in this Information Age; why education should never be used for political ‘piloolo’; and the urgency of advancing our human resource capital to global standards.)

Beautiful Minds
Just this Wednesday, September 2—the very day on which I am writing this article, in fact— CNN ran a story on the ‘world’s fastest human calculator’, Neelakantha Bhanu Prakash—a 20- year-old Indian gentleman (why are you not shocked by this name and nationality attached to mathematical prowess?).

“What’s 869,463,853 times 73?” the CNN article begins—taunting readers, as I am, you right now. Apparently, the answer is 63,470,861,269; apparently, Prakash answered within 26 seconds. This is our cue—you and I—let’s clap for Prakash. This young gentleman has a lot of awards and accolades to prove; he has been accumulating them since age seven (7).

A friend of mine related to me, in excitement, somewhere last year, that he had met a math genius. He was frantic, speaking; implying, with his bewilderment, that this is something not typical of his country, something one only saw in movies—these beautiful minds; in this particular instance, this beautiful mathematical mind. “I met an illiterate mason today. Herh! The man can just look at a long string of numbers and, without referring back to them, recite these numbers.”

In this golden, global age of knowledge, this Information Age, where knowledge is a principal, vital tool, this beautiful mind, this potential 21st century giant, is dwarfed by illiteracy.

Strangulated Minds
I am going to, with this article, exclude myself from the bunch. I am going to present myself only as an onlooker; I advise that you do same. That you and I put on our caps of recollection and think back at some phenomenal people—phenomenal brains we have met in our lifetime,

and make examples of them—case studies. In this vein, I nominate two childhood classmates of mine: Nkrumah and Addae—one female, the other male. Such an intelligent duo they were! While their classmates were, for the most part, oblivious of the world around them; while their mates were trying their best to grasp (and sometimes failing) the lessons being taught them, these duo were already contemplating the vast world around them. They were speaking things that—as I reflect back on—stand the test of time, still hold relevance and still exude maturity. These two were just Primary 4 children.

At this juncture, I may have to refer back to my beloved rural students, already referred to, in this article’s prequel, and say that I have met in them, an Nkrumah and an Addae. But be careful when measuring the brain prowess of a village child, you might find yourself wantonly writing their potentials off. Be careful when subjecting them to these standardised measures we have come up with—these standardised tests, finding their accumulations in our BECEs and WASSCEs. Be careful when judging them by those red inks, their test scores, their command (specifically, lack thereof) of the English language, their seeming ‘limited-mindedness’, their closely walled aspirations. Be careful not to hurriedly judge (misjudge?) the village boy and girl, because theirs is a world plagued by scarcity. A lack and scarcity of the physical: infrastructure, motivated and qualified teaching staffs, educational wherewithal, etc. These students lack the indispensables—things without which one cannot expect a child to flourish. And these lacking ‘physicals’ have repercussive sociological and psychological effects: limited world views, scant sense of self-worth etc.

This section of the article is proving quite problematic, isn’t it?—because I have not included another very deprived bunch: children of underprivileged urban Ghana. So there you have it: the student-child of rural and deprived urban Ghana is plagued with scarcity.

I have met an Nkrumah and an Addae in rural and underprivileged urban Ghana, but the truth is when it comes to these students, one ought to have a sixth sense to be able to sniff out capabilities—these capabilities shrouded by depreciatory environments. One should not approach these students seeking tangible and immediate proof.

You too—walled!
Even with the inclusion of ‘deprived urban Ghana’ this article still is proving problematic, because it creates the impression of a flourishing ‘grass-is-greener’ section of Ghana. The part of the country where students are constantly acing the BECEs, the WASSCEs; the part seemingly grounds producing the nation’s future leaders; an un-plagued nirvana Ghana—privileged urban Ghana. I laugh at such suggestion. Because the entire nation, with its manpower and brainpower, with its children youth and adults, are automatically, too, plagued with a limited worldview. Our dreams and capacities, only limited to the beautifully shaped boundaries of our national border. (Topic for another day, eh?)

The Chinese, Indian Wisecrack
I have such visceral reactions to those racist-fueled biological explanations we tend to, without scientific proof, or with pseudo-scientific proof, give to certain sociological phenomena—and this abhorrence I have communicated in a number of articles. Because these explanations always are to the disadvantage of the Black mind and capabilities.

So when you say Chinese, Indians are naturally brilliant I go into anaphylactic shock (I tell you) and retort: it has been a conscious decision by these nations to pursue, and build the mental prowess of their populace. And in fact, this Prakash gentleman, in this CNN article said something along those lines. He, refusing the tag math ‘prodigy’, stated: “…I find the word ‘prodigy’ a little troubling as it just doesn’t capture the efforts and experience, it’s just a state that’s obtained out of nowhere.” Brilliant, brilliant gentleman. This is a topic needing an article of its own—I have just a paragraph or so, to my word limit.

But quickly I must note: genius, like greatness, does not happen in the vacuum, it requires work. Genius, like greatness, can exist in a person but be easily strangled, and never see the light of day in the face of unfavourable environments. Think about all the Ghanaian geniuses—all the brilliant Ghanaian children being suffocated by a lack of quality education, by a lack of a globally-minded environment. We all who could, with the right environment, influence not just our nation but this vast world around us, are left to die—our capacities untapped. Think about this illiterate mason with a photographic memory, these village and underprivileged urban boys and girls, very much an Nkrumah and an Addae but not really an Nkrumah and an Addae because of their circumstances, think about the great Ghanaian minds you have met…

The Grand Inquisition
Ghana, which of these four Biblical grounds are you? ‘Soil-less’ ground? Rocky ground? Thorny ground? Fertile ground?

This entire nation, having within it, its fair share of great minds—minds that ought to inspire global awe—we all are relegated to the audience seat, watching on as other nationals marvel us with their brains, as they change the world with their beautiful minds. You know it already: this is our cue, let’s clap for them.

I saw it coming – Ben Ephson on Koku Anyidoho’s expulsion fr...
6 minutes ago

When Joseph's brothers sold him into slavery; they didn't kn...
7 minutes ago