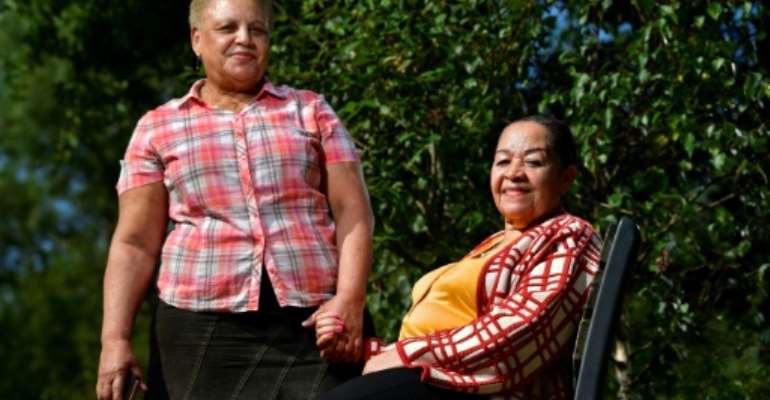 Torn from their parents, brought up in a convent then abandoned when the Belgian Congo gained independence.

Five mixed-race women, among the last living witnesses to one of the darkest chapters in Europe's colonial history in Africa, are now seeking justice.

Lea, Monique, Noelle, Simone and Marie-Jose are now more than 70 years old, mothers and grandmothers in their own right, but they can never forget their childhoods.

Now they have filed suit in Belgium demanding reparations from central Africa's former colonial power for a "crime against humanity".

Belgium apologised to the mixed-race descendants of its white colonists in 2019 -- but it will take more than that to heal the harm done.

"My father was Portuguese. He went to his country for a holiday. The trip was long. When he came back, he couldn't find me because the Belgian state had kidnapped me. I was two years old," Lea Tavares Mujinga, 74, told AFP.

"I was placed in the convent of Katende, in Kasai province, like other children before me. My mother was Congolese, two children were taken away from her."

When she arrived, the nuns took her clothes and dressed her in a "rough little dress", she recalls at her daughter's home in the suburbs of Brussels.

In the mornings, there was no bread or milk, but only rice prepared with palm oil -- "I couldn't eat it".

She had no bed but a woven mat and a thin blanket.

The children were not beaten or abused, they could go to school, and some even become attached to the their hosts at the convent.

But, "in retrospect, having become a mother and grandmother, we tell ourselves that it wasn't normal. How did we manage to cope?"

Malnutrition has left her with after-effects from which she still suffers.

Simone Ngalula's mother, married to a Belgian agricultural scientist, was forced to bring her children to the convent after his death.

"She was told: 'Your husband is dead. You won't know how to raise a white man's children. We'll take care of it," says Simone, according to the story she pieced together with her mother, with whom she was reunited when she was around ten years old.

"I wasn't weaned when I arrived. I cried all day long, according to what I was told," she told AFP.

Lea Tavares Mujinga suffered from malnutrition in the convent, but went on to marry a Belgian man and have children of her own. By JOHN THYS (AFP)

"We lived in a group. We suffered together, we sang together," recalls Simone, a warm woman whom Lea considers a sister.

As mixed-race children, they felt discriminated against. "At school, they used to call us 'cafÃ© au lait' (coffee with milk). We weren't accepted," recalls Simone.

They called us "children of sin. A white man couldn't marry a black woman. The child born of this union was a child of prostitution," confides Lea.

Her mother visited her at the convent when Lea was six or seven years old, but it was not until adolescence that they met again.

"Today I want to know why I was taken away from my family. We became wards of the Belgian state. How do you make up for a lost life, a broken life?

"I'm waiting for reparation. I have lived with this serious trauma. I couldn't talk about it to my husband or my children."

The five have demanded "a provisional sum of 50,000 euros" and the appointment of an expert to assess their ongoing torment.

At independence in 1960, children still in the convent were supposed to have been repatriated with the nuns to Belgium.

The evacuation did not take place. The girls, including Simone, were abandoned and militiamen arrived, ostensibly to guard them.

The older ones went into hiding. The surviving younger children can't dwell on what happened next.

"We, the little ones, they make us sit on the floor and spread our legs. 'We'll show you how we bring children into the world'," Simone says.

After the death of a Belgian husband, Lea came to Belgium with her children in 1988. She wrote to Queen Fabiola, who advised her to apply for welfare.

"An abandonment, a tearing," that pushed her to act.

"When I found my sisters again there was the same anxiety in their eyes. So I said, 'the only psychologist for this is justice,'" she concludes, her voice trembling.

I lied that you contracted covid-19, you didn’t also chop co...
30 minutes ago