By Tinashe Mushakavanhu - The Conversation 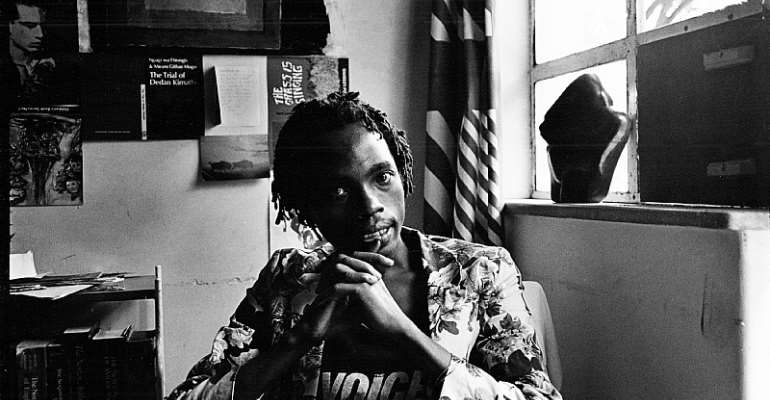 The writer Dambudzo Marechera , who died on 18 August 1987, remains a popular figure in Zimbabwe. He is heralded by a young generation as a radical and counter-culture figure.

Marechera became an instant star when his first book The House of Hunger was published to critical acclaim in 1978. The novella tells of growing up in colonial Rhodesia (now Zimbabwe) in raw and exquisite prose, a harrowing portrait of lives disrupted and young disillusionment. The rumour is that he wrote it in a tent or squat, but then perhaps he did not, for as James Currey puts it in Africa Writes Back :

Marechera developed his own life story with the self-regarding obsession of an actor.

Everything to do with his conflicted legacy had a touch of mythology. Whether it was throwing plates and cups at his hosts at the Guardian Fiction Prize ceremony, trying to burn down a university library, or travelling without a passport between countries and continents.

His magnum opus, The House of Hunger, came immediately after his expulsion from New College, Oxford university. Though his publishers desperately expected him to produce the 'great Zimbabwean novel', Marechera's later work was inconsistent. He saw two more books published: Black Sunlight (1980) and Mindblast (1984). Further work was released posthumously: The Black Insider (1990), Cemetery of Mind (1992) and Scrapiron Blues (1994).

After confounding critics and foes, and leading an erratic lifestyle, the writer was dead at 35. Marechera embodies celebrity and politics, spectacle and radicalism, universality and self-aggrandisement. What endears him to a generation of readers is his refusal to offer easy answers or present static identities for his fictional characters or for himself. House of Hunger. Heinemann Books London

But who is Dambudzo Marechera? I never met him. He died when I was four years old and has always been an enigma. But I recently discovered a set of old letters which reveal the real import of Marechera's influence .

A visit to the archive

For a long time I associated the National Archives of Zimbabwe with bureaucracy and viewed it as an unwelcoming security zone. My early visits were focused on accessing the Marechera papers, or what remains of them. The more I visited, the more items went missing, and sometimes they were truncated. When I told friends about the appearance, disappearance and reappearance of materials, many suggested that the institution has a general suspicion of researchers and that it censors information.

It was during one of these visits that I saw a folder that contained a neat pile of hundreds of handwritten letters. The melodramatic structure and rhetoric of the letters disturbed the stable meanings I held about Marechera, especially their expressions of psychic pain, longing, desire, frustration, boredom, and the material details of the correspondents' private lives – that now make them irresistible, intimate public archives.

The letters are valuable historic documents; their inclusion in the national archives was a fate their writers could never have imagined. The value of these letters depends on their continued circulation. Yet, they have been ignored by researchers who have hollowed out black testimony in constructing the figure of Marechera. Much of the Marechera scholarship is scaffolded on white memory.

The letters function as a space of knowledge and confession and are complex objects positioned at the intersection of personal, institutional and memorial motives.

Addressed in care of the Dambudzo Marechera Trust, the letters were dispatched after Marechera's death from urban townships, rural areas, growth points, mining compounds, farms; places that only appear in the news during election season or moments of catastrophe. In death, Marechera ruptures the view of Zimbabwe as a little corridor that starts in Harare and ends in Bulawayo. These letters provide a unique psychological and physical map of his enduring influence – a community forged around issues of privacy, of friendship and of individual freedom.

The correspondents feel comfortable talking to Marechera. They know he will never scold them for what they say. He is ordinary like them, but constantly harassed by the state and its security apparatus. Most are school dropouts who absconded to join the war and came back to no jobs or unwelcoming families.

After the war, they were expected to grow up quickly and join the army of nation builders. But there were no systems created to deal with the traumas of war. Many returned with stories and nightmares and didn't know how to share them, or where to turn for help. The government bureaucrats were unconcerned. Marechera reading in First Street Mall, Harare, during the International Book Fair Harare in August 1983. © Tessa Colvin via Humboldt University , CC BY

Marechera decided to be the story doctor who provided an outlet for people to vent. He opened a small office in the Harare City Centre. The office was minimalistic, it had no furniture; there was a phone in the corner. Marechera had decided to build a healing platform outside the official system. He understood the sickness that was all around him that could only be cured through storytelling sessions. The writing surgery operated for four days before it was shut down by government agents. At least 1,000 young people had consulted Marechera.

They turned to Marechera who was the resident philosopher in Harare's nightclubs and bars. They eagerly identified with his iconoclasm. To them, his was a fearless voice that undermined every kind of complacency and hypocrisy.

Death that refuses to be killed

Never before have I encountered an author so seriously dedicated to his pen and voice as the late Dambudzo “Desperate” Marechera. He remains my luminary in my poetic endeavor; his courageous denunciation of “filthy first citizens” an undying inspiration to me. These are the bigots, now coming to the foreground dead and alive because of their sins, who kept Dambudzo well under foot till his death.

From the perspective of the speculative enterprise, Marechera's death was a necessary death, a death that has had movement, that created a schism in the Zimbabwean imagination. For the political class it was good riddance, but for multitudes of young people Marechera's death was the awakening.

It was a new type of death that refused to be killed. Marechera's transcendence to the afterlife became an expression of the radical and new logic, a speculative process.

His death is the moment he is born again, every utterance of his name is a recreation of who he was, of who he should have been. He changes with every memory, every retelling. If Dambudzo Marechera had not existed, Zimbabwe would have invented him.

Mushakavanhu is the author of the just-released book Reincarnating Marechera : Notes on a Speculative Archive. The public is invited to contribute to Marechera's archive over here .

Tinashe Mushakavanhu does not work for, consult, own shares in or receive funding from any company or organization that would benefit from this article, and has disclosed no relevant affiliations beyond their academic appointment.

By Tinashe Mushakavanhu, Post-Doctoral Fellow, University of the Witwatersrand