Okyenhene Calls For Arrest Of Chief At Dome Faase Over Chaos 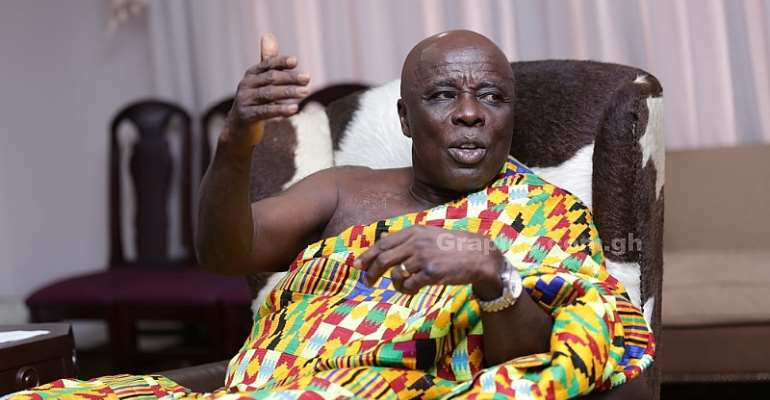 Okyenhene Osagyefuo Amoatia Ofori Panin has called for the immediate arrest and prosecution of the supposed chief who reportedly triggered the violence at Dome Faase in the Obom-Domeabra Constituency in the Greater Accra Region which forced the military to take over the town last week.

Two soldiers were brutally assaulted by some youth at Dome Faase when they went there on guard duties in what is turning out to be dispute over land.

A statement, which was signed by D. M. Ofori-Atta, Akyem Abuakwa State Secretary, and copied to the Inspector General of Police, said the supposed person whose actions triggered the violence is not the Mponuahene of Akyem Apedwa as he claimed.

It, therefore, called on the IGP to immediately effect the arrest of Bafour Sarpong Kumankuma who it said is posing as Mponuahene of Akyem Apedwa and his associate to be prosecuted.

“It has become necessary and of immediate concern to react to news reports that a certain Bafour Sarpong Kumankuma purporting to be Mponuahene of Akyem Apedwa has attributed his unlawful conduct with regard to the invasion of Dome Faase to the Okyenhene Osagyefuo Amoatia Ofori Panin,” the statement said.

“The news as reported by several media outlets represents a grave assault on the dignity of the Ofori Panin Stool,” the statement said, adding “on Tuesday, 25th August 2020, Bafour Sarpong Kumankuma, with the assistance of thugs and hoodlums, provoked an unneeded social conflict by unlawfully invading the village of Dome Faase in the Obom-Domeabra Constituency.”

The statement said “the Dome Faase incident has not the knowledge and or acceptance of His Majesty Osagyefuo Amoatia Ofori Panin. We wish to state unequivocally that Bafour Sarpong Kumankuma is not the Mponuahene of Akyem Abuakwa. He is not recognized and accepted as a chief or a holder of any traditional authority at Akyem Abuakwa.”

It said “he acted as land guard in furtherance of his illicit and criminal profession related to unlawful sand winning, unauthorized sale of lands and violation of the order and enforcement of the public policy which has been his hall mark. He has time without number disrespected summons to appear before the Kyebi Executive Council to answer queries regarding his nefarious activities.”

“This point is to the effect that the Osagyefuo dissociates himself from the criminal incident at Dome Faase. Further to this, it must be made clear that there is no authorized associative responsibility to the person of the Okyenhene,” the statement said, adding “what is of immediate concern to the Ofori Panin Fie is the resultant effect to disturb the immemorial unity and historic solidarity of Akyem Abuakwa and the Ga State (sic).”

“The Okyenhene wishes to assure the people of Dome Faase and the Ga State of his commitment to peaceful co-existence and harmony which has characterized the relationship between Okyeman and the Ga State,” it added.