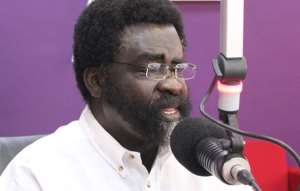 A former lecturer at the Kwame Nkrumah University of Science and Technology (KNUST), Dr Richard Amoako Baah, has wondered why President Nana Akufo-Addo’s cousin, Mr Gabby Asare Otchere-Darko, is the one purporting to speak for Attorney General Gloria Akuffo with regard to the controversial Agyapa deal following the leakage of the AG’s scathing legal opinion on the agreement.

Mr Otchere-Darko had told Osei Bonsu on Asempa FM’s Ekosii Sen political talk show on Friday, 28 August 2020 that in the AG’s final letter dated 12 August 2020, Gloria Akuffo made a U-turn on her initial position, saying: “We have reviewed the latest letter under reference and the submitted drafts agreement and note that our comments have been incorporated and changes effected to the draft agreements.”

In that letter, Gloria Akuffo said: “The agreements run in perpetuity and, therefore, have no fixed term”.

“They are expected to run until the expiration of the last mining lease in Ghana”, the AG opined, adding: “The agreements also appear to be cast in stone with no options to evaluate their effectiveness and/or satisfactory performance so as to renew or terminate same should the need arise. This makes the agreement unconscionable”, the leaked legal opinion said.

Speaking to Kwabena Bobie Ansah on Accra100.5FM’s The Citizen Show on Tuesday, 1 September 2020 on the deal, Dr Amoako Baah, who is a stalwart of the governing New Patriotic Party (NPP), said the “Agyapa deal is a good idea but certain people have smuggled themselves into it with certain things which I am not happy about”.

Dr Amoako Baah said Ms Gloria Akuffo is the Attorney General and must be the one speaking on the matter rather than Mr Otchere-Darko “because what shows that what Gabby Asare Otchere-Darko said is true?”

“That is what is wrong with it”, Dr Amoako Baah asserted.

Concerning the litany of issues raised by the Attorney General in her leaked opinion, Dr Amoako Baah, who said “I respect Gloria Akuffo very well”, wondered: “Who wrote such an agreement? Is the person a Ghanaian and does the person have Ghana at heart? It’s not a good thing at all”.

In his view, being the Attorney General, Ms Gloria Akuffo “must write officially to clarify that she changed her legal opinion because Gabby Asare Otchere-Darko is not her spokesperson”. 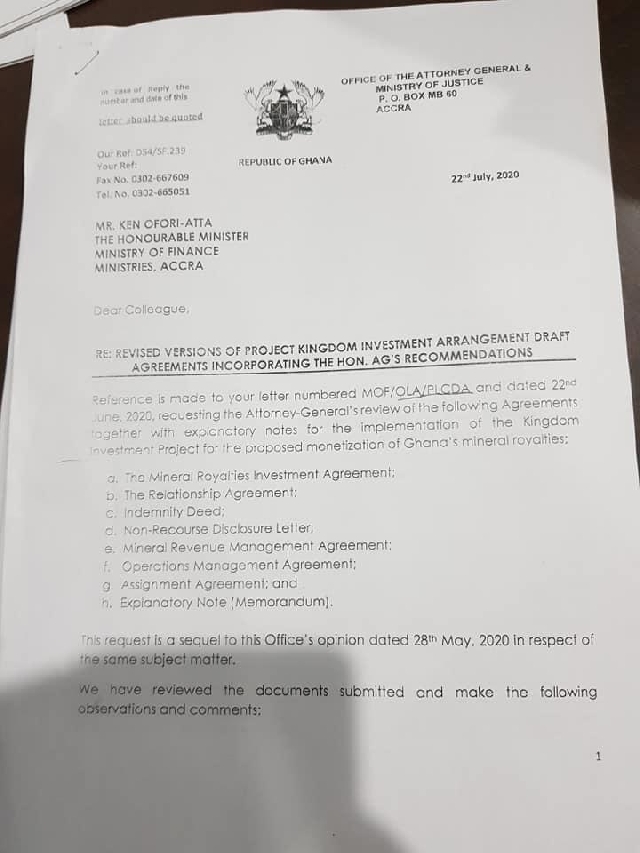 Parliament, a few weeks ago, in line with the Minerals Income Investment Fund (MIIF) Act, 2018 (Act 978), approved agreements to allow the country to derive maximum value from its mineral resources and monetise the mineral income accruing to Ghana in a sustainable and responsible manner. 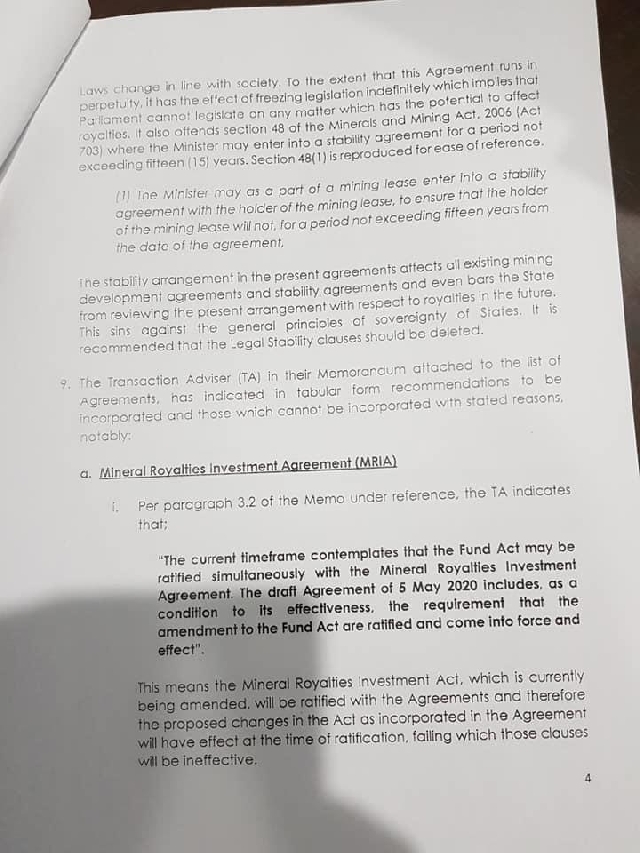 The move gives Agyapa Royalties Limited the right to secure about $1 billion to enable the government to finance large infrastructural projects.

The Minority in Parliament boycotted the deal and accused the government of mortgaging Ghana’s gold resources.

Former President John Mahama, flagbearer of the biggest opposition party, the National Democratic Congress (NDC), also reiterated the Minority’s concerns and said he will not respect the deal should he win the 7 December 2020 polls. 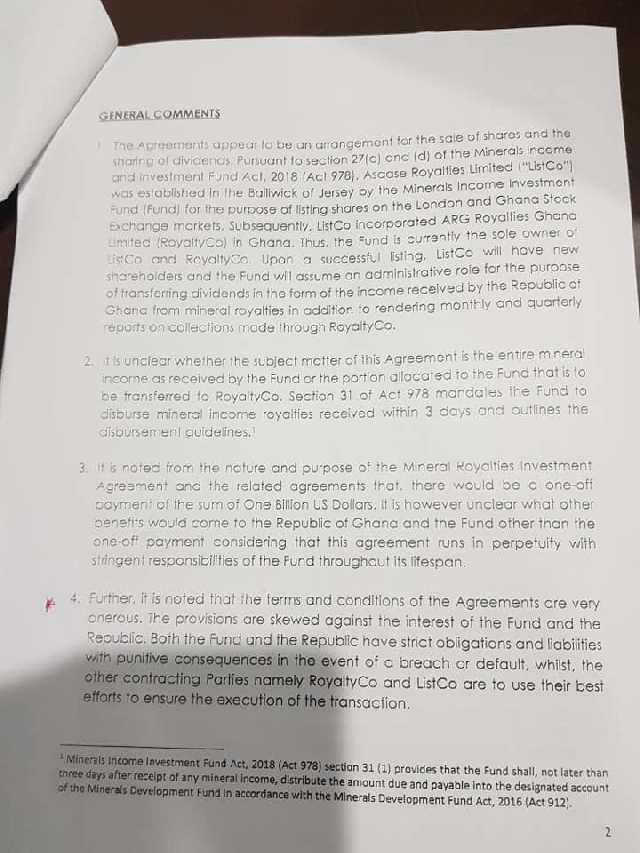 A coalition of CSOs in the mining industry has also kicked against it.

The AG’s leaked legal opinion expressed qualms about aspects of the deal. 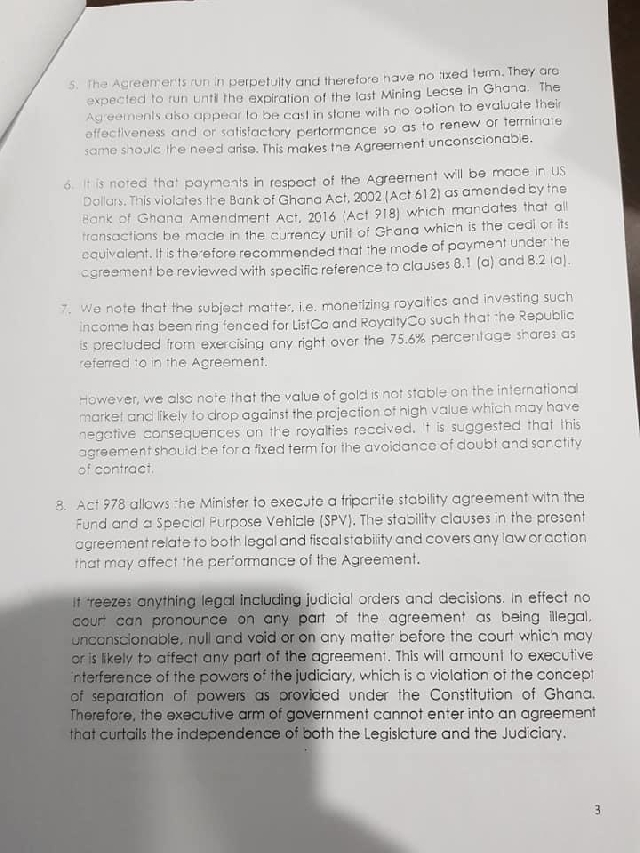 “It is noted that payments in respect of the agreement, will be made in US dollars. This violates the Bank of Ghana Act, 2002 (Act 612) as amended by the Bank of Ghana Amendment Act, 2016 (Act 918), which mandates that all transactions be made in a currency unit of Ghana which is the cedi or its equivalent. And it is, therefore, recommended that the mode of payment under the agreement be reviewed with specific reference to clauses 8.1 (a) and 8.2(a).

“We note that the subject matter, that is monetising royalties and investing such income, has been ring-fenced for ListCo. and RoyaltyCo. such that the Republic is precluded from exercising any right over the 75.6 percentage shares as referred to in the agreement.

“However, we also not that the value of gold is not stable on the international market and likely to drop against the projection of high value, which may have negative consequences on the royalties received.

“It is suggested that this agreement should be for a fixed term for the avoidance of doubt and sanctity of contract”, the AG advised.

The legal opinion pointed out that: “Act 978 allows the minister to execute a tripartite stability agreement with the fund and a special purpose vehicle (SPV). The stability clauses in the present agreement, relate to both legal and fiscal stability and covers any law or action that may affect the performance of the agreement.

“This will amount to executive interference of the powers of the judiciary, which is a violation of the concept of separation of powers as provided under the Constitution of Ghana. Therefore, the executive arm of government cannot enter into an agreement that curtails the independence of both the legislature and the judiciary”, it said.

On Thursday, Finance Minister Ken Ofori-Atta defended the deal as a clean and transparent one.

“It is a clean transaction as far as I know and we’re just looking for ways to maximise value and to play in the game that our multinationals play and now we have the skillset to be able to do that”, he asserted.

“So, once begin the process of listing, all of us – and it’s going to be listed both in London and in Ghana and we’ve done that before with AngloGold Ashanti etc., so it’s not a mystery, in a sense, to do that”, Mr Ofori-Atta added.

In the long run, Mr Ofori-Atta said he foresees Agyapa becoming a major player in Africa.

“I remember being on Wall Street and companies like Barrick starting and within an issue of a decade, becoming the third-largest company in the world. It is in the same ambition here and that this Agyapa is going to be the largest company in Africa, in the minerals resource place if we manage it right with the type of people that we are making sure are going to be custodians for this”, he noted.

He also denied that Ghana’s gold is being mortgaged.

“There are those who say we should be careful not to mortgage or sell today, the gold in the ground for future generations. First of all, this is not the case.

“But I have two questions for those who raise these concerns: if it is OK for the foreign investor who holds the concession to sell what is in the ground upfront, then why not us? But more importantly, why is it OK to borrow today for the future and not good to use our resources to leverages assets for tomorrow.

“We must be creative to expand our sources of raising income to support our development. We are in a hurry to catch up. Every year, every generation we wait, we keep people and families stuck in the abyss of poverty and suffering.

“If we want to increase our share of the global pie, it, sometimes, means creating innovative structures that give direct access to the natural resource in a manner that is open and transparent and operate in accordance with laws that exist outside our own country.

“That is why listed oil companies that operate in Africa can raise capital at levels closer to the European companies where they are based and not the countries where they operate. They create structures that focus the investors’ exposures on the commodity, not the country which opens up new areas of funding.

“The tactic of compartmentalising and separating perceived risks with actual risks has helped fuel companies to create more value from our resources than the governments and people who own the resources themselves”, Mr Ofori-Atta said.