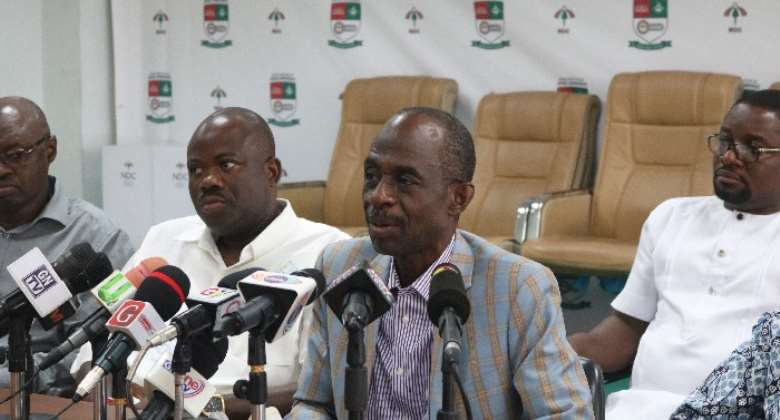 The opposition National Democratic Congress (NDC) has dared Special Prosecutor Martin, Amidu to prosecute persons he believed committed wrongdoing prior to the approval of the controversial Agyapa Royalties agreement.

The party says the Special Prosecutor’s lamentations on the findings of the deal are needless as he is clothed with the authority to investigate such breaches.

General Secretary of the NDC, Johnson Asiedu Nketia who spoke at a media briefing on Tuesday, challenged the Special Prosecutor to act.

“The Special Prosecutor must be reminded that he is mandated by law to investigate and prosecute by law among other offences, breaches of the public procurement law and other offences he has uncovered in this Agyapa scam. The OSP must conduct criminal investigations into this matter and ensure that anyone who directly on indirectly played a role in this Agyapa scam faces the full rigours of the law.”

“Even in the report, the Special Prosecutor himself has cited several actions by persons, officers and individuals who are clearly against the laws of this country, so I am surprised that we have not seen any effort now. Who is to initiate the prosecution? Does the Special Prosecutor need our permission to proceed? Why is he reporting to us as if we can go to the Finance Ministry and take documents for him? He should proceed and prosecute”, he added.

The NDC has also questioned President Nana Addo Dankwa Akufo-Addo's resolve to act on the corruption risk assessment by the Special Prosecutor on the transaction.

According to Asiedu Nketia the party is appalled by President Akufo-Addo's refusal to crack the whip on Finance Minister, Ken Ofori-Atta, and Deputy Finance Minister, Charles Adu Boahen whom the Special Prosecutor accused of illegally signing the agreement.

Mr. Asiedu Nketia accused President Akufo-Addo of shielding officials found to have contravened state laws in pushing the deal through adding that the lack of action from President Akufo-Addo shows that he is a “chief enabler and promoter of corruption in his government”.

“We must state without any equivocation, that the attitude of President Akufo Addo who has earned the unenviable reputation of being the “Chief Corruption Clearing Agent”, does not come as a surprise to us in the NDC. This is exactly what nepotism does to a country. It completely blinds leaders and weakens their ability to crack the whip on their errant and corrupt appointees.”

“We are therefore not surprised that President Akufo Addo has not shown any interest whatsoever, in punishing his corrupt officials who have been found culpable in this Agyapa imbroglio and retrieving billions of taxpayers monies that have been paid under the shady deal. President Akufo Addo has time and again, proven to be the chief enabler and promoter of corruption in his government. He has continuously defended and shielded his corrupt officials from punishment since he took office as was witnessed in the BOSTGATE corruption scandal, PDS scandal, missing excavators' scandal, Australian VISA fraud scandal, just to mention a few.”