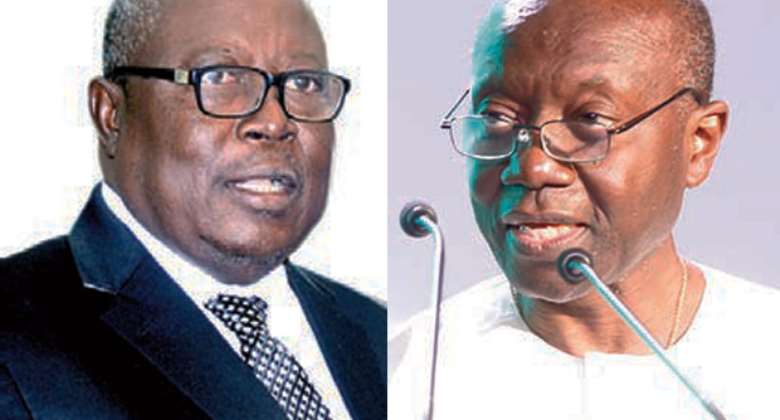 Short of naked greed and a dead-set desire to thoroughly and permanently ruin the hard-earned reputation and the visionary and inimitable achievements of President Addo Dankwa Akufo-Addo, I sincerely do not see how any patriotic and honest member of the Akufo-Addo Government could have hatched this kind of inexcusably criminal attempt to literally sell the Sovereign Democratic Republic of Ghana into what eerily amounts to eternal slavery, at least existentially and relatively speaking. I have been pondering this emotionally traumatizing matter for quite sometime now, and the only most logical conclusion that I can arrive at is that whoever hatched such a humongous scam must be in possession of the psychological callousness, and heartlessness, of a vanguard operative of the National Democratic Congress (NDC).

I am here, of course, referring to the Agyapa Mineral Royalties Deal, which Mr. Martin ABK Amidu, the Independent Special Prosecutor, has concluded, after meticulously conducting a corruption-risk assessment, says it is both not contractually transparent and does not facilitate Nana Akufo-Addo’s publicly stated anti-corruption crusade (See “Imara and Databank Were Smuggled into ‘Lack of Transparent Agyapa Deal – Special Prosecutor” Graphic Online 11/2/20). We are also informed that the deal does not pass muster, via established procurement protocol, an unmistakable hint that perhaps the authors of such a bogus deal may soon need to follow the footsteps of Mr. Adjenim Boateng Adjei, the recently fired Chief Executive Officer (CEO) of the Public Procurement Authority (PPA). I am also here, of course, thinking about the equally scandalous but painful cases of Mr. Boakye Agyarko, the former Energy Minister, and Mr. David Asante-Appeatu, the Akufo-Addo relative and former Inspector-General of the Ghana Police Service (GPS), who was apparently fired for recklessly infecting the confidence of Jubilee House with a paid National Democratic Congress’ mole.

Put in plain language, what Mr. Amidu is hereby saying is that there is an inescapable intent to cream the State by at least a couple of the noncompetitively and non-transparently selected Advisers who were to manage this multi-extractive mineral-resource patrimony of all Ghanaians. In other words, the Agyapa Deal, in the form in which it was first presented to and approved by Ghana’s Parliament, according to the Special Prosecutor, is practically the functional equivalent of the infamous “Flying Nkonfem” Mega-Theft that was deviously crafted and unconscionably implemented by the previous John “Airbus-Kanazoe” Dramani Mahama regime of the National Democratic Congress under the so-called Savannah Accelerated Development Authority (SADA), which eventually turned out to be just another patently criminal avenue and aperture created by Little Dramani to fascistically ensure that a few selected Ghanaian citizens, almost wholly of Northern Ethnicity and/or Descent, would filthily line their pockets, wallets and bank accounts at the expense of the overwhelming majority of Ghanaian taxpayers.

Like the Mahama-conducted European Airbus SE Racket, we are told that a deliberately hidden network of extortion involving the Kenneth Ofori-Atta-owned Databank and another company by the name of Imara, of the Republic of South Africa, had been rigged up to serve as a money-transfer front for the former. This kind of Mahama copycat thieving, no wonder, may very well have emboldened the Gonja-born payola kingpin to genuinely feel some genetic kinship with his so-called Akyem Mafia political enemies, not opponents, mind the Dear Reader; thus his abrupt decision to, once again, revive his hitherto comatose and effectively suspended 2020 presidential-election campaign, a decision he took with the patently bogus pretext of policing the operatives of the Jean Adukwei Mensa-led Independent Electoral Commission (IEC) a couple of months ago. Now, Little Dramani has good reason to feel and believe that with the explosion of the Agyapa Deal into at least national contretemps, if not a major scandal, he is smack in good company.

You see, I first began to have my well-founded doubts and suspicions, in retrospect, when the Britain-born perennially infamous Paul Afoko beer-bottle-bashing cousin and devious detractor cousin of President Addo Dankwa Akufo-Addo literally emerged from the woodwork to smugly and smirkingly contradict Attorney-General Gloria Akuffo, who had been hitherto widely reported by the media to have virulently taken exception to any attempt to implement the Agyapa Deal. And the Attorney-General and Minister of Justice, of course, is not a total stranger to either the Akufo-Addo-for-President electioneering campaign machine or the Akuapem-Akropong branch of the Ofori-Panyin and Ofori-Kuma Clan. We may very well sooner than later be forced to frontally face critical questions of how the founding Executive-Director of the Danquah Institute (DI) left his job or the Institute, where yours truly was summarily removed from the masthead of the Board-of-Director because he had dared to vehemently caution Mr. Michael Dokosi and his Daily Post, and the rest of the Trokosi Nationalist Hoodlum Pack, against the incessant and invidious demonization of the then-Candidate Akufo-Addo as a drug addict and a drug dealer.

This is my authoritatively informed profile of this bilious kinsman by accident, so the Dear Reader can just fathom the acute funk of trepidation that yours truly was afflicted with, when the former Editor-Publisher of the Akufo-Addo-owned New Statesman went public to so smugly and cavalierly contradict the indefatigable and inimitably conscientious, Woyome-smashing Attorney-General and Minister of Justice. I earnestly plead with Nana Akufo-Addo to promptly withdraw and indefinitely put the Agyapa Deal on ice, until further investigations have been conducted and the culprit or culprits behind such apocalyptic act of criminality of the highest order are condignly brought to justice. Nana Akufo-Addo has, so far, amply and laudably demonstrated that he wants the right thing to be done vis-à-vis the packaging and implementation of the Agyapa Deal. He has a bounden obligation to ensure that the right thing is done in the name of his revered ancestors, the interest of our present generation and the protective dignity of posterity.

There can absolutely be no two ways about the imperative necessity of rolling some noggins, if Nana Akufo-Addo is to save his lifelong and hard-fought and equally hard-won reputation as a firebrand and vanguard anticorruption and human rights spearhead. Indeed, as I vividly recall, Attorney-General Akuffo’s most salient misgiving and/or exception to the implementation of the Agyapa Deal was firmly grounded in the law of transparency, probity, accountability and justice, the very same tenets that the Rawlings’ Revolutionaries mendaciously claim to swear by. But, of course, the rest of us are well aware of the fact that the governance practice of the Rawlings Posse, of which Candidate Mahama is only a shameless pretender, is totally something else altogether.

At any rate, and we shall revisit the same in due course, the Attorney-General’s round rejection of the Agyapa Deal, reportedly in toto, had to do with an injurious proviso reportedly inserted into the same that stipulated that once it went into full effect, the Agyapa Deal could not be subjected to any salutary judicial review in perpetuity. Now, if this flagrant act of patent absurdity is not tantamount to an unpardonable and an ungodly attempt to literally sell or “donkomize” the country to our old British colonial masters and mistresses, I don’t know what kind of socioeconomic and political absurdity it is.

'A lot of idiots will occupy political positions if money la...
33 minutes ago

Proper management of natural resources will lead us to econo...
44 minutes ago