By Glenda Kwek, with AFP Bureaus 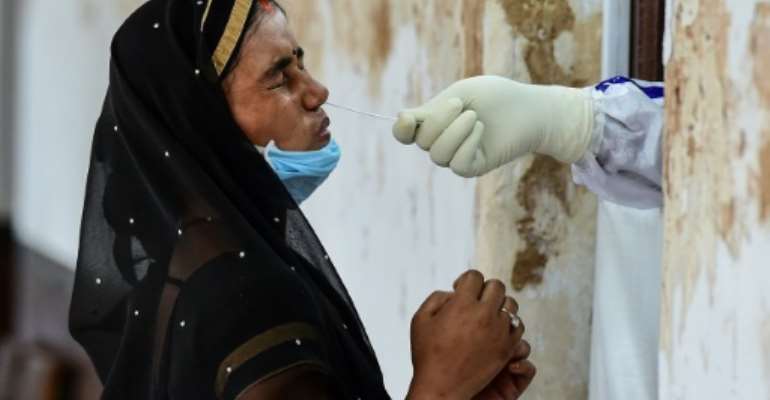 Global coronavirus infections soared past 25 million on Sunday, as countries around the world further tightened restrictions to try to stop the rampaging pandemic.

A million additional cases have been detected globally roughly every four days since mid-July, according to an AFP tally, with India on Sunday setting the record for the highest single-day rise in cases with 78,761.

The surge in India, home to 1.3 billion people, came as the government further eased lockdown restrictions on the weekend to help ease pressure on the reeling economy.

Even nations such as New Zealand and South Korea, which had previously brought their outbreaks largely under control, are now battling new clusters of infections.

On the other side of the world, Latin America -- the worst-hit region -- was still struggling with its first wave, with Covid-19 deaths in Brazil crossing 120,000, second only to the United States.

Portraits of essential workers are projected on the facade of the Cabildo of Buenos Aires. Latin America is the worst-hit region and is still struggling with its first wave of coronavirus infections. By ALEJANDRO PAGNI (AFP)

"And Brazil still isn't past the peak."

Nearly 843,000 people have died of Covid-19 globally, and with no vaccine or effective treatment available yet, governments have been forced to resort to some form of social distancing and lockdowns to stop the spread of the virus.

Masks will become mandatory from Monday on public transport and flights in New Zealand, which went more than 100 days without local transmission before the current cluster emerged.

And tightened virus curbs kicked in on Sunday in South Korea, which is also battling fresh clusters -- including in the greater Seoul region, home to half the country's population.

Despite the grim numbers, there has been steady opposition to lockdowns and social distancing measures in many parts of the world, often because of their crushing economic cost.

But resistance has also come from the extreme right and left of the political spectrum, as well as conspiracy theorists and anti-vaccine campaigners.

In Berlin, thousands protested against coronavirus restrictions but police later stopped the rally because many were not respecting social distancing measures. By John MACDOUGALL (AFP)

In Berlin on Saturday, around 18,000 people gathered to march against coronavirus restrictions -- but police later stopped the rally because many were not respecting social distancing measures.

Similar protests were held in London and Zurich, where some carried signs supporting the far-right QAnon movement, which promotes bizarre theories about Satan-worshipping cabals and "deep state" plots -- without any credible evidence.

The pandemic has upended economies and societies around the world, and halted most large gatherings -- from sport and music to religion and politics.

The Tour de France cycling race finally set off from Nice, two months late due to the pandemic. By Marco Bertorello (AFP)

The Tour de France set off from the French Riviera on Saturday, two months later than planned and with the French sport minister not ruling out the cancellation of the event because of the coronavirus.

Under the Tour rules, a team with two positive tests in its entourage would be expelled. A virus testing cell will travel with the teams throughout the race.

The world's top sport, culture and music events are struggling with the challenge of hosting spectators while reducing the risk of virus transmission.

But there was some cheer on Saturday in New York, once among the world's biggest coronavirus hotspots.

The Metropolitan Museum of Art in New York reopened to the public after a six-month shutdown due to coronavirus restrictions. By Kena Betancur (AFP)

Visitors raised their arms, clapped and lined up to get tickets as New York's Metropolitan Museum of Art reopened its doors to the public in a festive atmosphere after a six-month closure.

Tracy-Ann Samuel, who came with her daughters aged four and nine, said she couldn't wait to again be "surrounded by beautiful art".

"It means that there is some semblance of normalcy," Samuel said.