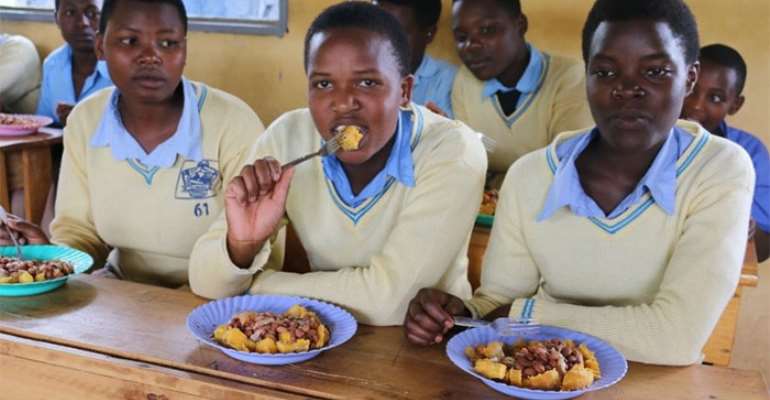 The 'hot meals for schoolchildren project' has started well and will surely end well with the commitment of the President in that direction unwavering.

We have, however, observed the decision by some New Patriotic Party (NPP) supporters and activists, as it were, to follow their National Democratic Congress (NDC) counterparts into the gutters of local partisan politics as they politicize the subject.

The assignment is about feeding Ghanaian children in schools for which all must support in whatever ways they can to ensure the success of the project.

Social media has been awash since the project commenced recently with all manner of graphic designs intended to showcase the President. There are scores of President Akufo-Addo's achievements to flaunt about and not this.

Such cheap propaganda is not decent and should not be encouraged in our body politic.

Of course, President Akufo-Addo deserves four more years to serve Ghana more because of his track record of quality performance. The campaign to have him re-elected as President, an assignment which is on course anyway, should be devoid of this cheap approach on social media.

President Akufo-Addo does not subscribe to this level of unexciting and uninspiring campaign using meals. One of the campaign stuff has a voice campaigning for the President using the food being delivered to the children as a bait of sorts.

As the nasty campaign module progresses, the NDC is being encouraged to do same.

The tendency for the children to watch the unfolding cheap propaganda and for this to impact negatively their upbringing cannot be ruled out, especially when the NDC jumps into the fray knowing its predisposition for such political games.  This is the reason why we should detach politics from such critical gestures which the President is doing first and foremost to ensure the comfort of Ghanaian children regardless of their parents' political affiliations.

Were they to be in the shoes of the President, some politicians would manage this project with a partisan lens, something which for President Akufo-Addo is mediocre politics which he does not dabble in and will never do so for any reason.

For those who have been privileged to be engaged to perform this duty of providing the meals, let them do so with a sense of patriotism and commitment.

The national interest supersedes partisan politics in such national assignments. Monitoring of the preparation of the food and distribution should be monitored with eagle eyes to   ensure that quality is maintained. The nation has passed through bad experiences with the preparation of free meals for schoolchildren. With desperation in the scheme of some political parties who can foretell what they can do by way of putting sand in the meals?

Those preparing food easily get carried away by the obsession with profit against quality. With food, the health factor cannot be overemphasized hence the need for a high level of monitoring to ensure that the beneficiaries are served nutritious meals with no threat to their health.