The daughters and sons of Fela in African Pop 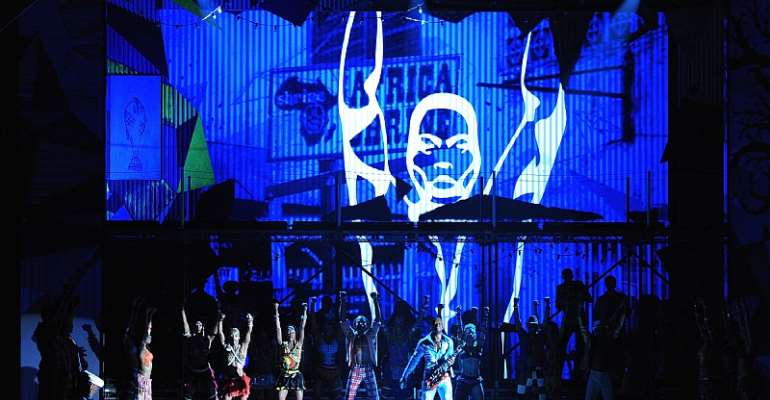 Decades after his death, Fela Kuti , Nigeria's most famous musician continues to live on through his art. Afrobeat , a genre he pioneered, has transcended generations after him, existing in varying forms. Contemporary African pop stars are sampling his work in new records. Much of that music is called 'Afrobeats' today, (the 's' is important) A new genre, partly inspired by Fela's work. It's the current flavour of Lagos, and the rest of the continent, where Nigerian pop music maintains a strong presence.

But how do these musicians portray this legend in their work? How do elements of Fela Kuti's music get reproduced? Does his conscious approach to art travel through the years into today's hedonistic popular culture?

In 2019, Nigerian singer Tiwa Savage christened her first single after signing a recording deal with Universal Music Group, '49-99' . The inspiration came from overcrowded large 'Molue' buses that used to be a common feature of transportation in Lagos. At a listening party for the single , Savage explained that she chose to adopt some Afrobeat elements within the song, to draw attention to the continued plight of Africans suffering and smiling. Tiwa Savage's 49-99 song features elements of Fela Kuti's music.

Four years earlier, Nigerian singer Niyola, featured on DJ Xclusive's 'Tonight ,' a song housed on the local disc jockey's According to X album. On the party track, Niyola manages to include lyrics from Fela's 'Jeun Ko Ku (Chop and Quench) ,' his first major musical success in 1971. Another singer, Niniola Apata , who is widely regarded as the Queen of Afro-house, went a different route. She featured Fela's first son, Femi Kuti, who added Afrobeat-esque saxophone sounds in her 2020 single 'Fantasy' . Savage, Niniola and Niyola all drew from Fela in enriching their music for audiences.

This shows how female Afrobeats artistes—who we can refer to as the daughters of Fela—have kept Afrobeat alive. Through highly emotive records, infused with socio-cultural messaging and instrumentals, they are extending its life and relevance to a younger crowd.

How have the male Afrobeats artistes fared as 'Sons Of Fela'? Nigerian pop star Wizkid has gained popularity for his ability to draw on Fela's texts, titles, imagery, symbolisms and much more. The singer has become so deft at it, that he regularly includes invocations of irony using Fela's lyrics. Wizkid's hit Joro , released in 2019, incorporated elements of Afrobeat in its production, but the essence of Fela's message was not infused. For lyrics, he looked elsewhere.

Recently, rapper Naira Marley altered texts from Fela's 1978 'Shuffering and Shmiling' to fit into the polarizing 2019 single 'Am I A Yahoo Boy'. For a song that is considered a subtle promotion of internet scams, using Fela's lyrics came across somewhat as a negative.

Prior to the emergence of Wizkid and Naira Marley, veteran singer 2baba had already had his hands in Afrobeat. For him, Fela's work offered opportunities sampling the messaging and sounds. His 2007 song 'Pako' samples lyrics from Fela's 1972 'Swegbe and Pako.' Idibia's 2014 'Jeje' is also notable for simulating certain Fela sounds and co-opting the call and response technique of Afrobeat. While trying to shake off public criticism of his personality at the time, 2baba arranged cuts from a Fela interview, for the intro to the video of his 2017 single 'Holy Holy'.

While 2baba would have his audiences believe that his attempt at damage control was in tribute to Fela, local audiences can tell a genuine dedication when they hear one. A good case can be heard on Oritsefemi's 'Double Wahala,' off the 2013 album, Money Stop Nonsense. People believe 'Double Wahala' is a worthy Fela tribute for two reasons: The first is the effort to synthesize a recognizable Afrobeat melody that invokes dance movements that are reminiscent of Fela. A simpler reason is provided at the intro to 'Double Wahala'. Oritsefemi clearly states that “this song is dedicated to Fela Anikulapo-Kuti”. Oritsefemi's Double Wahala pays tribute to Fela Kuti.

However, there is more to 'Double Wahala' than its melody and dedication suggest. The phrase 'Double Wahala' originally belongs in Fela's 'Confusion Break Bone' (1990) which is a remake of 1975's 'Confusion'. In the former, Fela sings, “Double wahala for dead body/And the owner of dead body”. Oritsefemi's appropriation of a phrase from Fela's chorus in writing his for 'Double Wahala' was rewarded widely. The song became a mainstream favourite, and won him awards including the 2014 song of the year at the prestigious Headies award ceremony. Sahr Ngaujah as Fela Anikulapo-Kuti with artists of the company in the production Robbie Jack/Corbis/Getty Images

Burna Boy 's successful career since 2018 has Fela's DNA all over it. Although the pop singer has sampled Afrobeat throughout his career, he took this a notch higher in his 2018 single, 'Gbona' . In the record, Burna Boy sang of citizens who have no money, yet, call on the police for justice. The artiste shows the reality of police unreliability and corruptibility in his country, a favourite theme of Fela's work. Rather than criticise a police service that is stuck in its ways, Burna implores citizens to accept the make-up of their police. In addition, an extension of Fela's 'Shuffering and Shmiling' is heard in the final verse of 'Gbona' where Burna refers to people sitting in a public bus, yet, regard themselves as bosses.

A while ago, artistes like Olu Maintain (Alo, 2001) and Dagrin (Democracy, 2010) appropriated Fela to fortify their delivery of protest texts. Through the last decade, however, Afrobeats artists appreciate that Fela was a lot more than protest. He was, after all, a man of pleasure man who once married 27 wives. For confirmation, look to young upstart Omah Lay, who likens his genitalia to Fela Kuti's famous large 'Jumbo' blunts, on his song 'Yeyeye.' As does the South African rapper AKA through 'Fela in Versace' (2018). Fela is portrayed as an enjoyment man in AKA's 'Fela in Versace' smash hit record.

And how about the biological children of Fela? His sons Seun and Femi continue to uphold Afrobeat. Seun Kuti inherited Fela's Egypt '80 band and family name. Femi Kuti is renowned for his performance of Afrobeat around the world, and has been in contention for the Grammys, four times.

Fela Kuti created a rich body of work that defies time. Each generation after him has sampled and referenced Afrobeat as a valuable addition to the music from Nigeria. As sounds across the continent continue to evolve, more artistes are bound to look Fela's way for inspiration and assistance. They will surely have more than enough to work with.