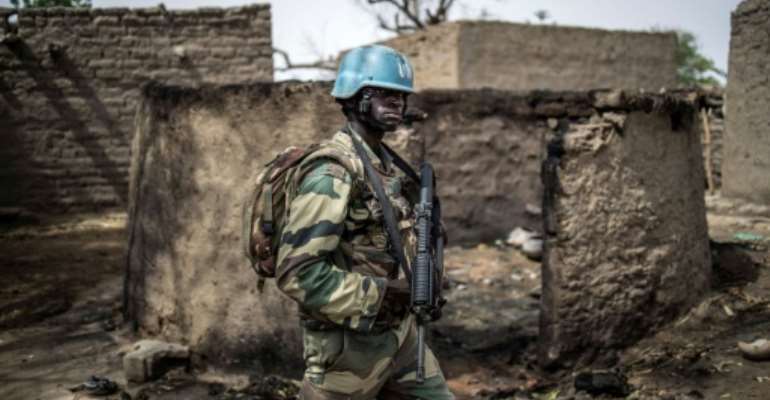 A member of the United Nation's mission in Mali, as UN experts accuse top officials of obstructed a 2015 peace deal. By Marco LONGARI (AFP/File)

United Nations experts have accused senior army and intelligence officials in Mali of deliberately obstructing a shaky 2015 peace accord, originally designed to reduce violence in the war-torn West African country.

The revelations appear in an expert report delivered to the UN Security Council on August 7, which AFP has obtained, and which come during a festering political crisis in the Sahel state.

Mali is currently in the grip of a deep political impasse between President Ibrahim Boubacar Keita and a strident opposition movement insisting on his resignation.

But much of the popular anger in the impoverished country can be attributed to its brutal eight-year conflict, which first broke out in its restive north.

Ethnic Tuareg rebels captured much of the region in 2012, triggering a war that has since been taken over by jihadists and spread to central Mali, killing thousands of civilians and soldiers along the way.

Mali has been devastated by conflict, and the peace deal is seen as one of the country's few ways to escape this cycle of violence. By MICHELE CATTANI (AFP/File)

But according to the UN report, top security officials in the country have "threatened and delayed" a key peace deal which many view as one of the few escape routes from Mali's cycle of violence.

Brokered in Algiers in 2015 between several armed groups and Mali's government, the deal provided for rebels joining the national army again, among other measures.

Its implementation has dragged on for years, however, despite international pressure for it to be fully applied.

The report pointed to "mistrust, burden and confusion" caused by the discrepancy between the government's statements and actions.

UN experts named former army chief of staff, Keba Sangare, as one of the men responsible for frustrating the deal, notably for "questionable decision-making" during a long-planned troop redeployment.

Much of the popular anger in Mali can be attributed to its brutal eight-year conflict, which first broke out in its restive north. By (AFP/File)

The Algiers accord provided for Malian troops reoccupying northern cities to be formed into mixed battalions of army regulars, former rebels, and pro-government militiamen.

But in the buildup to the process last year, some former rebels were not assigned units, and others were mistakenly assigned units in the south, causing months-long delays.

In another blunder, the army failed to provide a group of soldiers with transport when travelling for duty in the north in September last year, exposing them to "major security risks," according to the report.

Twenty of these soldiers were abducted on a public bus and remain missing. Another four were detained by security forces in neighbouring Burkina Faso, but released this year.

"The abductions and detentions... marked the beginning of the government's planning errors and delaying tactics," the report said.

Sangare went on to be sacked for his failure to stop a massacre in the Fulani village of Ogossagou in central Mali on February 14.

One of the survivors of the second attack on the Fulani village of Ogossagou. By MICHELE CATTANI (AFP/File)

That village had already been targeted in March 2019, when 160 people were killed in a suspected ethnically-motived attack.

Malian troops were deployed to the village after the first massacre. But in a fateful move, they left the area hours before the February attack.

A replacment unit failed to reach the village before some 35 defenceless residents had been killed.

Sangare, central Mali's military commander, had been "called numerous times and received messages informing him of the threat," the report said.

He had also given "a false assurance to his hierarchy" that troops would not depart the village before replacements had arrived.

Mali's intelligence services also came under fire from the UN experts for their alleged role in seeking to weaken the 2015 peace agreement.

The UN experts said Malian intelligence had become an "institutional vector" of an "unofficial strategy aimed at obstructing through prolonged delay the implementation of the agreement."

One of the methods the experts described included financing individuals within a mostly Tuareg alliance of armed groups -- which had signed the 2015 peace agreement -- to foster splinter groups.

Intelligence agents also "fuelled internal divisions" within the Algiers accord's other main signatory, the alliance of armed groups known as the Platform, according to the report.

President Keita, who first came to power in 2013, has been coming under increasing pressure to resolve Mali's bloody jihadist conflict.

On Tuesday, thousands of people took to the streets in the capital Bamako to demand his resignation.

W/R: Adiembra residents save 17-year-old student from kidnap...
36 minutes ago