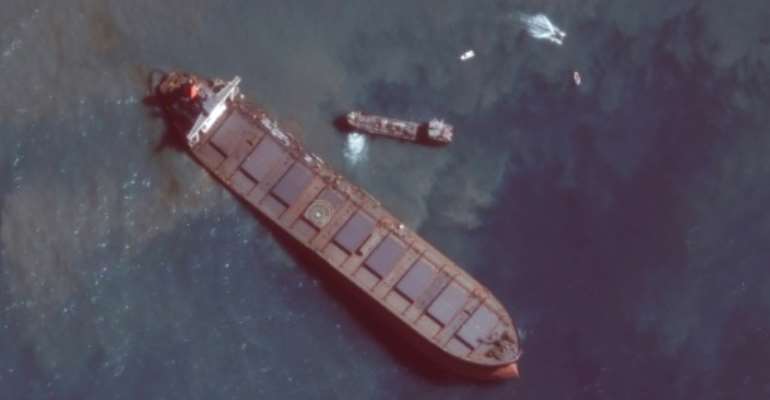 Mauritius avoided a second catastrophic oil spill Wednesday after salvage crews pumped the remaining fuel from the tanks of a cargo ship that ran aground off its coast, imperilling world-famous wildlife sanctuaries.

The stricken vessel threatens to break apart after more than two weeks stranded on a reef, where it leaked more than 1,000 tonnes of fuel into pristine seas.

Prime Minister Pravind Jugnauth said "all the fuel" had been pumped from reservoirs beneath the MV Wakashio bulk carrier, dodging what experts warned would been a crippling blow to an island nation popular with honeymooners and ecotourists.

"It was a race against the clock, and I salute the excellent work to prevent another oil spill," said Jugnauth, who added that another 100 tonnes still remained elsewhere aboard the Japanese-owned ship.

"The weather was calm and it helped the pumping exercise, it also prevented the breakup of the boat, which is inevitable."

Jugnauth said the "ecological crisis" was beyond the scope of the tiny Indian Ocean nation, and appealed for urgent international help.

France and Japan were among those to answer the call, along with thousands of ordinary Mauritians who volunteered day and night to clean sludge from the picturesque tropical coastline to which their economy is deeply tied.

Jugnauth acknowledged there was "still a lot of work to do" assessing and cleaning up the damage, but refused to take responsibility for the disaster.

"How did I do wrong?" he said, adding bad weather hindered efforts to pump oil from the ship earlier.

"We did everything right from the start. We were told that the risks of an oil spill were very low. The experts convinced us otherwise."

Police have launched an investigation into the accident and have seized the black box, log book and other items of interest from the vessel as part of their inquiries.

Fresh cracks appeared in the hull this week near the fuel reservoirs, spurring fears that the Wakashio could soon split up and inflict irreversible damage on the archipelago's fragile marine ecosystem.

Map of Mauritius, locating Pointe d'Esny, where a cargo vessel struck a reef on July 25, and Mahebourg, one of the areas worst-hit by the ensuing fuel spill. By Anne-Sophie THILL (AFP)

The ship struck a reef at Pointe d'Esny, an ecological treasure fringed by idyllic beaches, colourful reefs, sanctuaries for rare and endemic wildlife, and protected wetlands.

Pressure has mounted on the government to explain why it did not act earlier, with calls for the fisheries and environment ministers to resign, and volunteers angrily defying official orders to stay away from the clean-up site.

The spill is a double blow for tourist operators who had hoped foreign tourists could soon return.

The country has no active cases of coronavirus and had declared a wary victory after a long stretch without any new infections, but its borders remain closed.