Why terrorism continues in Nigeria and how to turn the tide

By Sheriff Folarin - The Conversation
Article 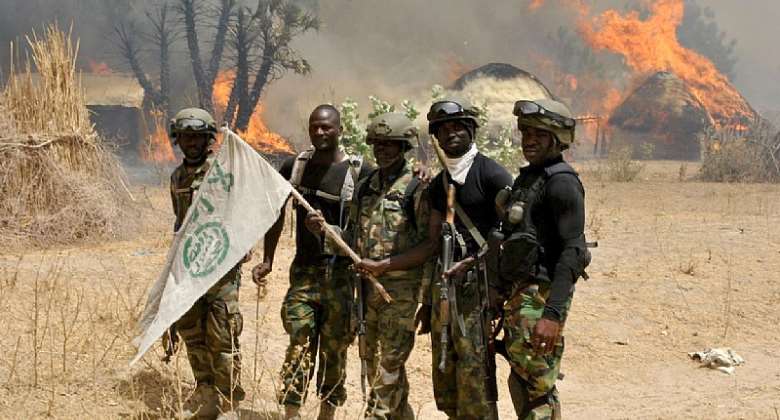 For ten years, the Nigerian authorities have engaged the terror group Boko Haram in the northeast without making much headway. After what appeared to be some success in 2015 and 2016, there was a resurgence of Boko Haram violence in 2017.

This worsened with the emergence of Islamic State in West Africa and, in more recent times, banditry and kidnap gangs all over the northern Nigeria region.

Having studied this crisis over the years as a political scientist, my view is that it is rooted in ethnic, religious and partisan politics and corruption. National security springs from mutual respect, peaceful co-existence and equality of social groups. But as argued in a paper I co-authored, the affiliation of Nigerian leaders to identity groups poses a challenge to national security.

We conclude that the government must show the will to fight the terrorists and eschew nepotism and ethnic or religious sentiments in the war. It must also deal decisively with corruption.

Additionally, we underscore that neither Boko Haram or Islamic State in West Africa is Nigerian or Muslim. No responsible or patriotic leader should see it as such. Nigeria should be unified in the struggle and united against terrorism. This is how to beat it into a permanent retreat.

Religious fundamentalism has long been a feature of social existence and relations in northern Nigeria. But religion-inspired terrorism emerged from 2009 after the murder by security forces in Maiduguri of the Boko Haram leader, Muhammed Yusuf, and hundreds of his followers. What started as targeting some members of the political elite in Borno by Boko Haram soon turned into organised bombings of public places.

Despite involvement of the military, foreign partners and counter-terrorism measures from 2011 to 2015, the government seemed unable to get a grip of the situation. Boko Haram grew stronger, expanded its operations and declared an Islamic Caliphate.

By 2015, over 10,000 people had been killed and about 3 million internally displaced. Hundreds of thousands had to flee into neighbouring countries.

The emergence of a former military ruler as president in 2015 created the expectation that the terror group could be brought under control. Instead, the Islamic State's West African Province also emerged – a breakaway faction of Boko Haram. Violence escalated and spread .

There were some successes in rolling back the expansion of Boko Haram. Between mid-2015 and late 2016, the federal government moved the terror and counter-terror “situation room” to Maiduguri, the heart of the crisis. The military halted the expansion of the “Caliphate” and took back the 14 local governments seized by the terror group. Flights and normal business returned to most parts of the northeast. Attacks stopped and the military could claim that Boko Haram had been technically defeated.

But then, just when it seemed the menace of Boko Haram had been ended by sheer military force, the federal government suggested dialogue and ransoms. Aggression and violence returned in Northern Nigeria and still hasn't been completely controlled.

Read more: How Boko Haram has evolved over the past ten years

One school of thought argues that the will and dynamic approach in the fight against Boko Haram were short-lived, which wasted the success achieved in two years. When the government sought dialogue and negotiation and paid ransoms , it re-energised the terror group.

Another view is that the current administration was weakened when it began considering amnesty for repentant members of the group and swapping their prisoners for release of innocent Nigerian and foreign captives.

Yet another view is that the group's breakup into factions fueled internal competition, with the groups' targets on the receiving end.

For me, two theories explain the protracted crisis. They also amplify the other perspectives.

First is that there are people in government who lack the will to fight because of religious and ethnic affiliations or connections. Some in government consider Boko Haram members as northerners or Muslims who should therefore be dealt with cautiously.

Some military leaders have been accused of nepotism and of giving away vital details to compromise the onslaught against the terror gangs. The Borno State governor recently accused the military of sabotage in an attack on his convoy.

The second explanation is corruption. Since 2014, some senior soldiers and their civilian counterparts directing the war have come to see the war budget as an endless means to draw money for personal enrichment. There are examples of counter-terrorism or so-called counter-insurgency funds stolen by the national security adviser and dozens of others as well as some isolated cases of stolen war money by some security or service chiefs . While some opted for plea bargains , others are still undergoing trial.

The recent rise in banditry and demonstrations against it show that the people can no longer accept the circumstances. Boko Haram, Islamic State, bandits and kidnap gangs are threats to Nigeria's peace, stability, security and economic prosperity. Everyone wants a stop to it. What do we do?

How to break the vicious circle

Government has the responsibility to provide genuine leadership in the war. The statement credited recently to the army chief that the crisis can only be stopped by Nigerians, thus passing the buck to civilians, is irresponsible. It's only the armed forces that have the arsenals and training to fight Boko Haram and other such groups.

Corruption must be fought and conquered. The Borno governor once accused soldiers of extorting money from motorists where Boko Haram has a strong presence. Such practices – as well as instances of compromised military intelligence – are a big problem the military high command must stop by itself.

Dialogue, negotiation, ransom payments, amnesty and integration of repentant insurgents into the army and society are not the solution. They will only serve as the internal seeds of destruction of the army and its efforts against terrorism.

And, in my view, any attempt to integrate “repentant” terrorists in the army will expose the military and security architecture to intelligence and operational compromises.