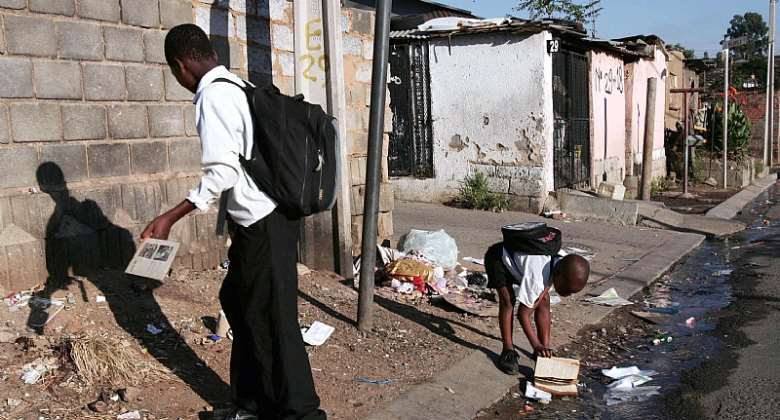 When faced with complex problems that require coordination and collaboration, government departments almost instinctively retreat to their silos and predetermined responses. As a result, workable solutions often fall through the cracks and citizens pay the price.

The same may be true in the case of childhood malnutrition in South Africa.

Undernutrition is a particularly worrying aspect of this, because of its association with diabetes, hypertension and cardiovascular disease in adulthood.

It includes being underweight for one's age, too short for one's age (stunting), dangerously thin for one's height (wasted) and deficient in vitamins and minerals (micronutrient malnutrition). These conditions stem from a range of biological and other factors, including malnutrition of pregnant women and babies before and after they are born.

Chronic undernutrition (stunting) also influences physical growth, mental and cognitive ability and the development of the immune system during childhood. Women who were themselves stunted are at higher risk of having stunted offspring.

South Africa's policies for child nutritional security are similar to those of Brazil and Peru. Those countries have seen improvements in the rate of stunting. Not so in South Africa, where around 25% of children under the age of three years are stunted. The situation has not changed in two decades.

Recent studies point to a possible explanation for this. It is that in South Africa the various actors who are supposed to deliver clean water, safe sanitation and hygiene have not engaged with one another in a systematic way. And even though it's well known how these facilities are related to health, nutrition and growth, the knowledge isn't being translated into policy.

A solid body of evidence links different forms of malnutrition with environmental conditions. Lack of access to water, sanitation and hygiene (referred to as WASH) contributes to poor child health, nutritional status and physical growth . The pathway from water to stunting is through repeated episodes of intestinal infections and is referred to as environmental enteropathy .

A study of 70 low- and middle-income countries found that increasing access to and use of improved water sources reduced the risk of stunting in children under the age of five years.

The United Nations Children's Fund noted the link as far back as its 1990 Strategy for Improved Nutrition of Children and Women in Developing Countries.

In that same year, the African Union drew similar associations between child health and the provision of hygiene and environmental sanitation in the African Charter on the Rights and Welfare of the Child.

But poor access to clean water and proper sanitation remains a pervasive concern across Africa. For example, at the closing of the Millennium Development Goals cycle in 2015, more than 70% of populations in sub-Saharan Africa were living without adequate sanitation.

In South Africa, the picture is different. Some 89.4% of households have access to piped or tap water in their dwellings. Nevertheless diarrhoeal diseases, often associated with poor water and sanitation, remain the second leading cause of death in children under five years of age in the country.

Our study focused on Gauteng province and the city of Johannesburg. We identified the numerous departments and policies that are responsible for providing these facilities, as well as the nutritional status of children.

Of the six policies identified for review, three mentioned sustainable clean water, safe sanitation and safe hygiene, nutrition and children. But none explicitly linked the hygiene factors to nutritional status in children.

We found that it's not clear who is responsible for integrating water, sanitation and hygiene and nutrition.

Departments stubbornly function in silos. They tend not to coordinate delivery of their services. Relations between levels of government are poor. The national, provincial and local levels don't always work in harmony.

The various departments are primarily concerned with their own main areas of activity. They also face restrictions in addressing crosscutting issues.

For instance, the Department of Health is concerned with direct and acute clinical issues. It doesn't have the authority to tackle the underlying and environmental causes of health conditions.

It's not clear, either, how the link between sanitation and nutritional status should be monitored.

Our research found that the public sector would benefit from better integration of water, sanitation, hygiene and nutrition into policy, planning and implementation frameworks.

We recommend that the various players involved in delivering water and sanitation services should be involved in the decisions made by the nutrition sector. These players would include government departments as well as community-based and non-governmental organisations.

At a very practical level, we would recommend the establishment of a database of tools, policies and implementation strategies around best practice at all levels of government.

A national dashboard of priority indicators (such as the sustainable development goals indicators) could be a powerful tool. It would allow visible monitoring and accountability for specific indicators related to child health and nutritional status. At present there are ad hoc dashboards such as the one for COVID-19 and maternal and neonatal mortality. They also differ between national and provincial levels as well as between departments, such as health and education.

The integration of data with indicators that are relevant for particular outcomes, and based on shared concerns, is essential.

Julian May receives funding from the National Research Foundation and the Cape Higher Education Consortium (CHEC).

By Doug Momberg, Researcher, University of the Witwatersrand And

Julian May, Director DST-NRF Centre of Excellence in Food Security, University of the Western Cape And

Mankessim: 55-year-old kenkey seller knocked down by speedin...
57 minutes ago