Kenya's coast is losing huge amounts of seagrass. But all isn't lost

By Lillian Daudi - The Conversation 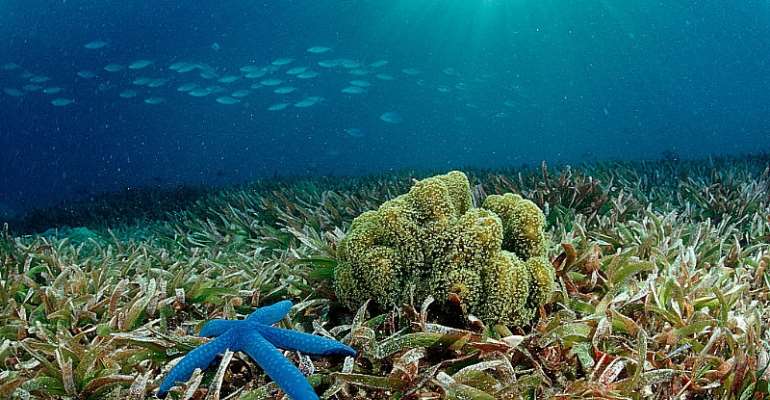 The UN environmental programme has released a report warning that fishing trawlers, seaweed farming, and tourism off the coast of Kenya is threatening the survival of seagrasses. Moina Spooner, from The Conversation Africa, asked Lillian Daudi to explain why the grasses are important and what must be done to protect them.

What is seagrass and why is it important?

Seagrasses are flowering marine plants that have adapted to survive in marine conditions. They are mostly found in shallow sandy bottom habitats and can form dense extensive meadows.

There are about 72 seagrass species distributed across the world's temperate and tropical oceans. These meadows trap sediment, absorb nutrients and give us clear waters.

They're a source of food, shelter and nursery areas for many organisms, including commercially important fish. This means that they provide food security for coastal communities by supporting artisanal fisheries and are an integral part of coastal livelihoods. They also support a number of endangered species such as dugongs, sea turtles and sea horses.

Seagrass meadows are also important carbon sinks , capable of trapping carbon from the atmosphere 40 times faster than tropical rainforests and storing it for hundreds of years.

What's happening to it along the coast of Kenya?

But these meadows are subject to frequent disturbance. For instance people disturb sediment on the seabed which suffocates the seagrass, or they damage the seagrass by trampling it. There are also natural disturbances, such as grazing by sea urchins. In some areas this has led to the total loss of seagrass.

Overgrazing, in particular by the collector sea urchin, has been a major factor in how seagrass is distributed along the Kenyan coast. This is because there's been a fast rise in sea urchin populations which I believe is due to overfishing. Fish, such as the parrot fish, are the natural predators of sea urchins.

For instance, in Kenya's north-coast area of Watamu and Malindi about 4.6% of seagrass is lost each year to urchins.

Is there any indication of how much is being lost and what type of effects will this loss have?

Between 1986 and 2016 – a period of 30 years – Kenya lost about 21% of its seagrass cover. The intensity and frequency of seagrass loss varies along the coastline. Some areas show signs of natural recovery while others have become altered habitats with a different composition of seagrass species.

The disturbance of seagrass meadows has caused fragmentation of continuous seagrass beds. These shallow ecosystems support most artisanal fishermen along the Kenyan coast, providing important habitats for fish, including rabbit and seagrass parrot fish.

Ongoing research work in my department at the Kenya Marine and Fisheries Research Institute shows that these losses may, in the long term, affect the dynamics of the food webs, especially the fish supported by these meadows, such as parrot fish.

Is enough being done to protect these grasses?

There are several efforts towards the protection of seagrasses.

Over the last decade researchers at the Kenya Marine and Fisheries Research Institute have been conducting research on seagrasses. This research supports the activities of various organisations responsible for the protection of seagrasses.

For five years, there have been efforts to protect seagrasses through restoration trials carried out by the Kenya Marine and Fisheries Research Institute. These trials provided data on the best species to use, the most cost effective ways and implications of restoration efforts. These trials are important to recolonise areas that have lost grass and increasing meadows. So far, the one that's shown the greatest success involved planting seagrass seedlings in punched holes in large bags on the ocean floor.

Kenya's seagrass rehabilitation efforts are commendable and contributed to the development of seagrass ecosystem restoration guidelines for the Western Indian Ocean region, supported by the United Nations Environment Programme.

There are also encouraging signs from government as there are currently efforts to review and implement the national coral reef and seagrass conservation and management strategy.

There are still some challenges when it comes to managing and protecting seagrasses, because we're still not sure of the distribution and actual cover estimates of seagrass along the coast. This requires sound techniques such as remote sensing and remotely operated vehicles that are now underway to enable mapping and monitoring of changes to seagrass beds over time. Until this happens, there's no certainty about which conservation strategies do or don't work.

The future is bright since the capacity in seagrass research has grown over the years, especially as more scientists have developed a passion for exploring these unique habitats.